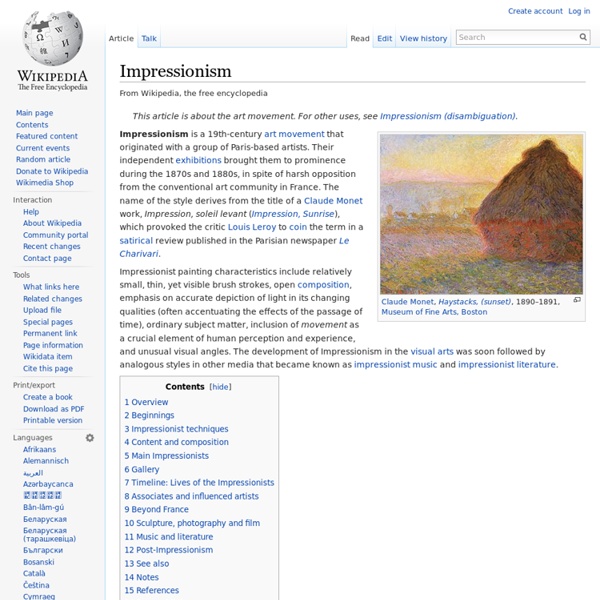 Impressionism is a 19th-century art movement that originated with a group of Paris-based artists. Their independent exhibitions brought them to prominence during the 1870s and 1880s, in spite of harsh opposition from the conventional art community in France. The name of the style derives from the title of a Claude Monet work, Impression, soleil levant (Impression, Sunrise), which provoked the critic Louis Leroy to coin the term in a satirical review published in the Parisian newspaper Le Charivari. Overview[edit] Radicals in their time, early Impressionists violated the rules of academic painting. Impressionism emerged in France at the same time that a number of other painters, including the Italian artists known as the Macchiaioli, and Winslow Homer in the United States, were also exploring plein-air painting. Beginnings[edit] In the middle of the 19th century—a time of change, as Emperor Napoleon III rebuilt Paris and waged war—the Académie des Beaux-Arts dominated French art.

Pre-Raphaelite Brotherhood The Pre-Raphaelite Brotherhood (also known as the Pre-Raphaelites) was a group of English painters, poets, and critics, founded in 1848 by William Holman Hunt, John Everett Millais and Dante Gabriel Rossetti. The three founders were joined by William Michael Rossetti, James Collinson, Frederic George Stephens and Thomas Woolner to form the seven-member "brotherhood". The group's intention was to reform art by rejecting what it considered the mechanistic approach first adopted by Mannerist artists who succeeded Raphael and Michelangelo. Its members believed the Classical poses and elegant compositions of Raphael in particular had been a corrupting influence on the academic teaching of art, hence the name "Pre-Raphaelite". In particular, the group objected to the influence of Sir Joshua Reynolds, founder of the English Royal Academy of Arts, whom they called "Sir Sloshua". Beginnings[edit] Illustration by Holman Hunt of Thomas Woolner's poem "My Beautiful Lady", published in The Germ, 1850

Impressionism Impressionism Movement, Artists and Major Works | The Art Story "Impressionism is only direct sensation. All great painters were less or more impressionists. It is mainly a question of instinct." Impressionism can be considered the first distinctly modern movement in painting. Developing in Paris in the 1860s, its influence spread throughout Europe and eventually the United States. Its originators were artists who rejected the official, government-sanctioned exhibitions, or salons, and were consequently shunned by powerful academic art institutions. Impressionism was a style of representational art that did not necessarily rely on realistic depictions. The Impressionists loosened their brushwork and lightened their palettes to include pure, intense colors. Subscribe to Share on Facebook Share on Twitter Welcome to The Art Story! Error occured while saving data... Like The Art Story Foundation on Facebook Impressionism Beginnings Exhibitions in Paris and The Salon des Refusés Salon des Artistes Indépendants Édouard Manet and the Painting Revolution

Industrial Revolution Iron and Coal, 1855–60, by William Bell Scott illustrates the central place of coal and iron working in the industrial revolution and the heavy engineering projects they made possible. The Industrial Revolution was the transition to new manufacturing processes in the period from about 1760 to sometime between 1820 and 1840. This transition included going from hand production methods to machines, new chemical manufacturing and iron production processes, improved efficiency of water power, the increasing use of steam power, and the development of machine tools. The Industrial Revolution marks a major turning point in history; almost every aspect of daily life was influenced in some way. Etymology Some historians, such as John Clapham and Nicholas Crafts, have argued that the economic and social changes occurred gradually and the term revolution is a misnomer. Important technological developments Textile manufacture Watch video: Demonstration of fly shuttle on YouTube Steam power Machine tools

Mark Harden&#039;s Artchive: &quot;Impressionism&quot; Impressionism Send email to The Artchive [Art Posters][Home][Juxtapositions][Galleries][Theory and Criticism][Art CD-ROM Reviews][Artchive][Links] Claude Monet, Impression, soleil levant Special relativity Special relativity implies a wide range of consequences, which have been experimentally verified,[2] including length contraction, time dilation, relativistic mass, mass–energy equivalence, a universal speed limit, and relativity of simultaneity. It has replaced the conventional notion of an absolute universal time with the notion of a time that is dependent on reference frame and spatial position. Rather than an invariant time interval between two events, there is an invariant spacetime interval. A defining feature of special relativity is the replacement of the Galilean transformations of classical mechanics with the Lorentz transformations. The theory is called "special" because it applied the principle of relativity only to the special case of inertial reference frames. Galileo Galilei had already postulated that there is no absolute and well-defined state of rest (no privileged reference frames), a principle now called Galileo's principle of relativity. Postulates[edit] where we get

Cubism A primary influence that led to Cubism was the representation of three-dimensional form in the late works of Paul Cézanne, which were displayed in a retrospective at the 1907 Salon d'Automne.[3] In Cubist artwork, objects are analyzed, broken up and reassembled in an abstracted form—instead of depicting objects from one viewpoint, the artist depicts the subject from a multitude of viewpoints to represent the subject in a greater context.[4] Conception and origins[edit] Pablo Picasso, 1909-10, Figure dans un Fauteuil (Seated Nude, Femme nue assise), oil on canvas, 92.1 x 73 cm, Tate Modern, London Cubism began between 1907 and 1911. Pablo Picasso's 1907 painting Les Demoiselles d'Avignon has often been considered a proto-Cubist work. Georges Braque's 1908 Houses at L’Estaque (and related works) prompted the critic Louis Vauxcelles to refer to bizarreries cubiques (cubic oddities). John Berger identifies the essence of Cubism with the mechanical diagram. "M. Cubism before 1914[edit]