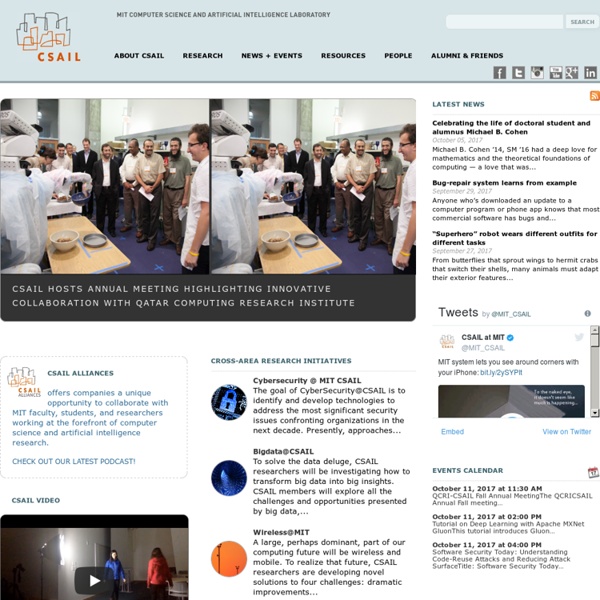 The AI Revolution: Road to Superintelligence - Wait But Why PDF: We made a fancy PDF of this post for printing and offline viewing. Buy it here. (Or see a preview.) Note: The reason this post took three weeks to finish is that as I dug into research on Artificial Intelligence, I could not believe what I was reading. It hit me pretty quickly that what’s happening in the world of AI is not just an important topic, but by far THE most important topic for our future. CH 12 Gross Anatomy of the Spinal Cord Exam 4 Review: Chapter 12: Gross Anatomy of the Spinal Cord vertebral column - The series of vertebrae forming the axis of the skeleton and protecting the spinal cord; divided into five groups by location: cervical, thoracic, lumbar, sacral and coccygeal groups. aka. spinal column, spine. vertebral canal = spinal canal - The passage formed by the vertebral foramen in the articulated successive vertebrae through which the spinal cord and its membranes pass.

Top notch AI system about as smart as a four-year-old, lacks commonsense Researchers have found that an AI system has an average IQ of a four-year-old child (Image: Shutterstock) Those who saw IBM’s Watson defeat former winners on Jeopardy! in 2011 might be forgiven for thinking that artificially intelligent computer systems are a lot brighter than they are. While Watson was able to cope with the highly stylized questions posed during the quiz, AI systems are still left wanting when it comes to commonsense. Virtue Ethics  Virtue ethics is a broad term for theories that emphasize the role of character and virtue in moral philosophy rather than either doing one’s duty or acting in order to bring about good consequences. A virtue ethicist is likely to give you this kind of moral advice: “Act as a virtuous person would act in your situation.” Most virtue ethics theories take their inspiration from Aristotle who declared that a virtuous person is someone who has ideal character traits. These traits derive from natural internal tendencies, but need to be nurtured; however, once established, they will become stable. For example, a virtuous person is someone who is kind across many situations over a lifetime because that is her character and not because she wants to maximize utility or gain favors or simply do her duty.

Meet the man who has been at the forefront of AI innovation for three decades Geoffrey Hinton was in high school when a friend convinced him that the brain worked like a hologram. To create one of those 3D holographic images, you record how countless beams of light bounce off an object and then you store these little bits of information across a vast database. While still in high school, back in 1960s Britain, Hinton was fascinated by the idea that the brain stores memories in much the same way. Rather than keeping them in a single location, it spreads them across its enormous network of neurons. Geneticists Create 'Bi-Fi'—The Biological Internet What's the Latest Development? By engineering a parasitical virus, geneticists have taken the first steps toward creating a biological internet in which the body's processes can be improved by controlling the natural communication abilities of cells. Using the M13 virus, Stanford researchers have created a mechanism to send genetic messages from cell to cell. "The system greatly increases the complexity and amount of data that can be communicated between cells and could lead to greater control of biological functions within cell communities."

The Current State of Machine Intelligence (The 2016 Machine Intelligence landscape and post can be found here) I spent the last three months learning about every artificial intelligence, machine learning, or data related startup I could find — my current list has 2,529 of them to be exact. Yes, I should find better things to do with my evenings and weekends but until then… Why do this? A few years ago, investors and startups were chasing “big data” (I helped put together a landscape on that industry).

Making Sense of Uncertainty · Resources Why uncertainty is part of science The guide has brought together researchers working in some of the most significant, cutting edge fields. They told us that if policy makers and the public are discouraged by the existence of uncertainty, we miss out on important discussions about the development of new drugs, taking action to mitigate the impact of natural hazards, how to respond to the changing climate and to pandemic threats. The guide discusses: The way scientists use uncertainty to express how confident they are about results.That uncertainty can be abused to undermine evidence or to suggest anything could be true: from alternative cancer treatments to anthropogenic CO2 not changing the atmosphere.Why uncertainty is not a barrier to taking action – decision makers usually look for a higher level of certainty for an operational decision (such as introducing body scanners in airports) than for a decision based on broader ideology or politics (such as reducing crime rates).

AI Catches Psychosis Before It Happens Automated speech analysis predicts psychotic episodes with 100% accuracy. AI can tell if a patient is approaching a psychotic episode through analyzing what the individual says, potentially better than humans can. Automation offers great standardization to a medical field where thoughts and state of mind have to be intuited through speech.

uk.businessinsider Shutterstock The world is going to be a very different place in 2045. Predicting the future is fraught with challenges, but when it comes to technological advances and forward thinking, experts working at the Pentagon's research agency may be the best people to ask. Launched in 1958, the Defense Advanced Research Projects Agency is behind some of the biggest innovations in the military — many of which have crossed over to the civilian technology market. These include things like advanced robotics, global positioning systems, and the Internet. So what's going to happen in 2045? Eric Weinstein may have found the answer to physics' biggest problems Two years ago, a mathematician and physicist whom I've known for more than 20 years arranged to meet me in a bar in New York. What he was about to show me, he explained, were ideas that he'd been working on for the past two decades. As he took me through the equations he had been formulating I began to see emerging before my eyes potential answers for many of the major problems in physics.

Science Communication at a Tipping Point On April 30, COMPASS published a paper at PLOS Biology that shared our experiences in science communication over the past decade. We organized a blog carnival to broaden the conversation about motivations, challenges, and lessons learned. This post is a reflection on public and private responses to the ideas we presented, and an attempt to answer, “Where do we go from here?” Physicist Proposes New Way To Think About Intelligence (ISNS) -- A single equation grounded in basic physics principles could describe intelligence and stimulate new insights in fields as diverse as finance and robotics, according to new research. Alexander Wissner-Gross, a physicist at Harvard University and the Massachusetts Institute of Technology, and Cameron Freer, a mathematician at the University of Hawaii at Manoa, developed an equation that they say describes many intelligent or cognitive behaviors, such as upright walking and tool use. The researchers suggest that intelligent behavior stems from the impulse to seize control of future events in the environment. This is the exact opposite of the classic science-fiction scenario in which computers or robots become intelligent, then set their sights on taking over the world.