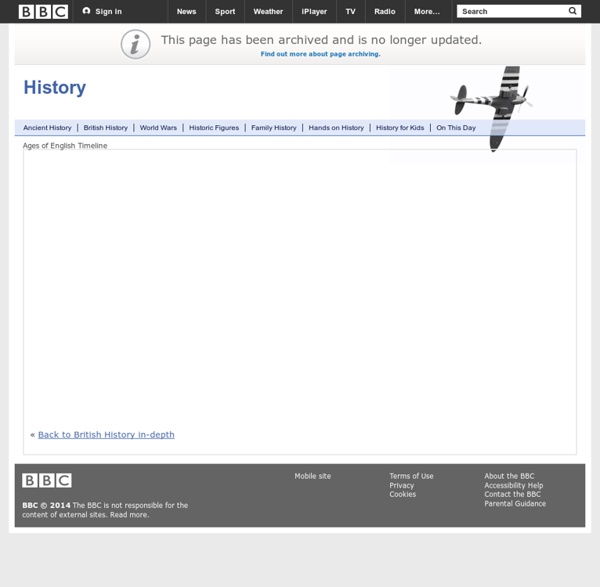 Beautiful web-based timeline software Welcome to LearnEnglish Kids We’ve sent a message to your email address with your username and password. Please do not reply to this email. We hope you have lots of fun learning English on our website. We hope you enjoy using our English language learning resources. If you have any questions you can visit our FAQ page. Old English Translator - Old English Grammar When reading the comments people make about this site probably the most common is that some users have no understanding of Old English Grammar and the most common question is, for nouns, what does Nominative, Accusative, Genitive and Dative mean? The following is an attempt to explain in simple terms what these words mean. There are many books written on this subject and they provide a much greater depth of accuracy and understanding than I can here. Having said that, here goes: Nouns are things - like King, sword and horse. The King's crown ( 's indicates possession) The Kings came to London (s on the end implies plural - IE many kings) In Old English there are four cases for nouns and these occur for both singular and plural. Nominative: The nominative case is used for the subject of a sentence. So - to examine these concepts for the noun 'king' or Old English cyning The King killed the slave. The slave killed the King. The King's crown was red. The slave rode his horse with the King.

Ebola features map Ebola first appeared in 1976 in 2 simultaneous outbreaks, in Nzara, Sudan... Participles in boxes « A Muse Amuses Yesterday I was standing in for a colleague who’s gone to Disney with her kids, and so I was teaching an Upper Intermediate 2 class (they’re preparing for FCE in december). The previous class they’d read a text about Pompeii and the other teacher had left me with the remit of continuing on into the language focus that followed on from the reading – participle clauses! While I can imagine some of you might think participle clauses aren’t for the faint hearted, I was actually quite excited at the prospect, since it gave me the opportunity to try out a game I designed for the IHWO Games Bank, which I’ve never actually had the chance to use in a class before. We quickly looked at the example sentences form the text and explored together what participle clauses actually were. Then it was straight into the game. Level 7 Lower Advanced Participles in Boxes I knew the success of the game would hinge on keeping the pace high, so I set the game up very carefully. Like this: Like Loading...

Helping language learners become language researchers: wordandphrase.info (part 1) What is wordandphrase.info? Wordandphrase.info is a brilliant website. Essentially, it is a user-friendly interface for analysing a corpus. (For those of you who haven’t come across this term as yet, a corpus is a collection of texts stored electronically.) Due to its user-friendliness (colour-coding for different parts of speech in the examples, colour-coding for frequency in text analysed etc.), wordandphrase.info seems ideal for use with students, a tool that could help them become more independent, by providing a means of discovering how language is used, that doesn’t rely on the teacher. It provides information like: frequency of word or phrase use (within the top 500 most-used words, 501-3000, 3000+)frequency of word or phrase use within particular genres (spoken, newspapers, fiction, academic)definitions, synonyms and collocates (for which it also provides frequency information, making it a very powerful collocational thesaurus, for phrases as well as words) It allows you to:

What are ‘Mrs’ and ‘Ms’ short for? The abbreviations Mr and Mrs are in common use, and are straightforward to pronounce when we see them written down: an approximation would be ‘mister’ and ‘missus’. But what are they abbreviations of? We seldom, if ever, write them out in full – and most of us probably never stop to think what the full versions of these words are. It may come as a surprise that ‘Mr’ and ‘Mrs’ aren’t actually short for mister and missus – they were originally abbreviations of master and mistress. ‘Mistress’ used to be the title prefixed to the name of a married woman, a usage dating back to the 15th century, as these early examples in the Oxford English Dictionary (OED) show: 1463 in S. 1471 J. The use of ‘Mistress’ to denote a married woman is now the least common meaning of the word: it only survives as a dialect form in some parts of the world. When and how did Mistress divorce Mrs? Lor-love-a-duck, it’s the missus! Some might think that the word missus is the full version of ‘Mrs’, written down. 1934 T.