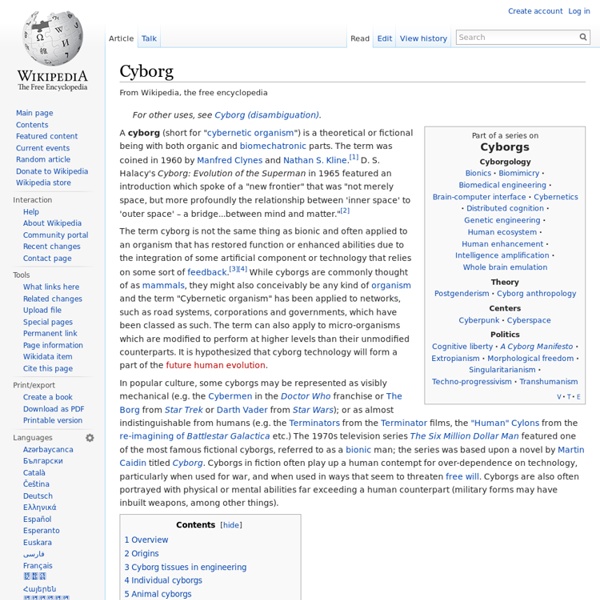 A cyborg (short for "cybernetic organism") is a theoretical or fictional being with both organic and biomechatronic parts. The term was coined in 1960 by Manfred Clynes and Nathan S. Kline.[1] D. S. The term cyborg is not the same thing as bionic and often applied to an organism that has restored function or enhanced abilities due to the integration of some artificial component or technology that relies on some sort of feedback.[3][4] While cyborgs are commonly thought of as mammals, they might also conceivably be any kind of organism and the term "Cybernetic organism" has been applied to networks, such as road systems, corporations and governments, which have been classed as such. Overview[edit] The term is also used to address human-technology mixtures in the abstract. Origins[edit] The concept of a man-machine mixture was widespread in science fiction before World War II. The term was coined by Manfred E. Cyborg tissues in engineering[edit] Individual cyborgs[edit] Animal cyborgs[edit] Related:  Cyborgenic Reengineering the Human Body

Human enhancement An electrically powered exoskeleton suit in development as of 2010 by Tsukuba University of Japan. Human enhancement is "any attempt to temporarily or permanently overcome the current limitations of the human body through natural or artificial means. It is the use of technological means to select or alter human characteristics and capacities, whether or not the alteration results in characteristics and capacities that lie beyond the existing human range." [1][2][3] Technologies[edit] Existing technologies[edit] Emerging technologies[edit] Speculative technologies[edit] Ethics[edit] While in some circles the expression "human enhancement" is roughly synonymous with human genetic engineering,[6][7] it is used most often to refer to the general application of the convergence of nanotechnology, biotechnology, information technology and cognitive science (NBIC) to improve human performance.[5] Inequality and social disruption[edit] Effects on identity[edit] See also[edit] References[edit]

Bionic contact lens Bionic contact lenses are being developed to provide a virtual display that could have a variety of uses from assisting the visually impaired to the video game industry.[1] The device will have the form of a conventional contact lens with added bionics technology in the form of Augmented Reality,[2] with functional electronic circuits and infrared lights to create a virtual display.[3] Babak Parviz, a University of Washington assistant professor of electrical engineering is quoted as saying "Looking through a completed lens, you would see what the display is generating superimposed on the world outside.”[4] Manufacture[edit] The lenses require organic materials that are biologically safe and also use inorganic material for the electronic circuits. The electronic circuits are built from a layer of metal a few nanometres thick. The light-emitting diodes are one third of a millimetre across. Development[edit] Prototype and testing[edit] See also[edit] References[edit]

Electronic tattoo An ultra-thin electronic device that attaches to the skin like a stick on tattoo can measure electrical activity of the human body like heart, brain waves and other vital signs without the bulky electrodes used in current monitoring. process[edit] These tattoos are similar to those in children's fake tattoos. It usually starts out on a sheet of plastic, is then applied to the skin and rubbed on from outside the plastic, then the plastic is peeled away, leaving only a very thin, rubber patch that has a layer of flexible silicon wires. It is ultra-thin slices of plastic or rubber that encases tiny silicon wires, sensors, radios, cameras and even electricity generating cells. Applications[edit] There are many applications in health care, wellness, and fitness. A company called Electrozyme makes electronic tattoos that appear to target athletic performance. There is a specific patent for an electronic tattoo that functions as a lie detector. References[edit]

Engineered Human Intestines Function Like the Real Thing in Mice Researchers have engineered small intestinal tissue from human cells, and when placed in mice, the transplants were able to digest and absorb like the real thing. The work, published in the American Journal of Physiology: Gastrointestinal and Liver Physiology this week, could help treat one of the major causes of intestinal failure in premature babies and newborns. Previous studies by Children’s Hospital Los Angeles (CHLA) researchers showed how tissue-engineered small intestine (TESI) could be generated from taking human small intestine donor tissue and then implanting it into immunocompromised mice. Now, CHLA’s Tracy Grikscheit and colleagues have found that mouse TESI is very similar to the TESI derived from human cells—and that both contain key building blocks such as the precursors (both stem and progenitor cells) that will go on to regenerate a living tissue replacement intestine. Read this next: World First: Scientists Observe DNA Shuttling Between Cells, Triggering Tumor Growth

Wired glove A wired glove (sometimes called a "dataglove" or "cyberglove") is an input device for human–computer interaction worn like a glove. Various sensor technologies are used to capture physical data such as bending of fingers. Often a motion tracker, such as a magnetic tracking device or inertial tracking device, is attached to capture the global position/rotation data of the glove. These movements are then interpreted by the software that accompanies the glove, so any one movement can mean any number of things. Wired gloves are often used in virtual reality environments. History[edit] The Sayre Glove, created by Electronic Visualization Laboratory in 1977, was the first wired glove.[1] In 1982 Thomas G. One of the first wired gloves available to home users in 1987 was the Nintendo Power Glove. This was followed by the CyberGlove, created by Virtual Technologies, Inc. in 1990. In 2002, the P5 Glove was released. Following the P5 Glove is 5th Glove. Alternatives[edit] Popular culture[edit]

untitled Modality (human–computer interaction) In human–computer interaction, a modality is the general class of: a sense through which the human can receive the output of the computer (for example, vision modality)a sensor or device through which the computer can receive the input from the human In less formal terms, a modality is a path of communication between the human and the computer. When multiple modalities are available for some tasks or parts of tasks, the system is said to have overlapping modalities. When multiple modalities are available for all tasks, the system is said to have redundant modalities. Having too many modalities for a particular task is not a smart idea, however if you do not have enough modalities that will not be good as well. The computer can be equipped with various types of input devices and sensors to allow it to receive information from the human.

9 Implants that make human healthy body even more useful Here’s a list of 9 ways you can modify your body to be even more useful, from bionic implants to portable power generators. 1. RFID Chips – A nice and easy way to start out with body hacking is to implant an RFID chip into you. An RFID chip is just a passive antenna that’s pre-configured to transmit a specific code when it’s brought near an RFID reader. Generally, RFID is used as a key of sorts; so for example, you can set up your computer or your phone to unlock only when you pick them up. 2. 3. 4. 5. 6. 7. 8. 9. Source Visual prosthesis A visual prosthesis, often referred to as a bionic eye, is an experimental visual device intended to restore functional vision in those suffering from partial or total blindness. In 1983 Joao Lobo Antunes, a Portuguese doctor, implanted a bionic eye in a person born blind. Many devices have been developed, usually modeled on the cochlear implant or bionic ear devices, a type of neural prosthesis in use since the mid-1980s. The idea of using electrical current (e.g., electrically stimulating the retina or the visual cortex) to provide sight dates back to the 18th century, discussed by Benjamin Franklin,[1] Tiberius Cavallo,[2] and Charles LeRoy.[3] Biological considerations[edit] The ability to give sight to a blind person via a bionic eye depends on the circumstances surrounding the loss of sight. Technological considerations[edit] Visual prosthetics are being developed as a potentially valuable aid for individuals with visual degradation. Ongoing projects[edit] Dr. Dobelle Eye[edit] Dr.