10 Vestigial Traits You Didn't Know You Had 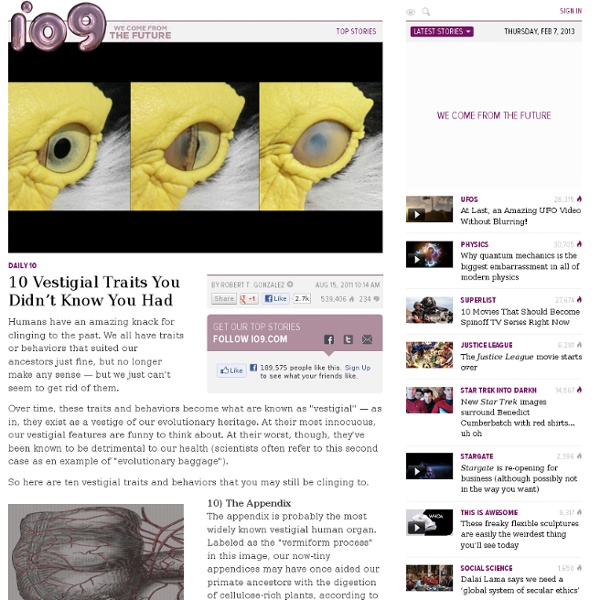 Let's not forget that crease between the middle of your upper lip and your nose (the philtrum), left over from the days when we had a split down the middle of our snout like rodents, cats, dogs, etc. (Why did that evolve, anyway? Reptiles don't have it...) Also, on the subject of male nipples: They are most likely vestigial in a different way than many of the other features on this list, in the sense that they aren't left over from an evolutionary event, but rather an embryological/developmental one. If you define "vestigial" in terms of development rather than evolution, the bellybutton should count too!

Parenting Resources Child Behavior Advertisements: Advertising links will direct you off of the KidsGrowth Web site. KidsGrowth is neither responsible for nor does it necessarily endorse the privacy practices, content or products of these sites. | home | contact us | about us | | parenting & behavioral | child development | growth milestones | Antibiotic Overuse May Increase Superbug Evolution Rate Multiple drug-resistant Staphylococcus aureus bacteria seen under an electron microscope. Photo: CDC By flooding our environment with antibiotics, people may alter a little-appreciated but profound aspect of bacterial evolution: the very pace at which it occurs. Bacteria may evolve more rapidly and more radically than just a few decades ago. This proposition is still a hypothesis, but it’s an intriguing one.

Vaccine Critics Turn Defensive Over Measles Photo HUNTINGTON BEACH, Calif. — Their children have been sent home from school. Their families are barred from birthday parties and neighborhood play dates. Online, people call them negligent and criminal. Rediscovering Biology - Case Studies: The Genetics of Resistance to HIV Infection This case uses the example of HIV, to explore the relationships between viruses, cells and the immune system, and the role of genes in disease resistance. An animation explains PCR (polymerase chain reaction) and electrophoresis and their practical use as a genetic test. We will see how mutations in an HIV receptor confer relative reslstance to infection. We will find out how often this mutation occurs in the general population, and see data about additional mechanisms of HIV resistance. Before beginning this case study, you may want to review these related materials: • HIV and AIDS Video • HIV and AIDS Online Text • Human Evolution Online Text • Genomics Video • Genomics Online Text

Twins Every summer, on the first weekend in August, thousands of twins converge on Twinsburg, Ohio, a small town southeast of Cleveland named by identical twin brothers nearly two centuries ago. They come, two by two, for the Twins Days Festival, a three-day marathon of picnics, talent shows, and look-alike contests that has grown into one of the world's largest gatherings of twins. Dave and Don Wolf of Fenton, Michigan, have been coming to the festival for years.

Infant Vision Development By Gary Heiting, OD One of the greatest moments when having a child is the first time your newborn daughter or son opens their eyes and makes eye contact with you. But don't be concerned if that doesn't happen right away. The pace of evolution The pace of evolution Does evolution occur in rapid bursts or gradually? This question is difficult to answer because we can't replay the past with a stopwatch in hand. However, we can try to figure out what patterns we'd expect to observe in the fossil record if evolution did happen in bursts, or if evolution happened gradually. Then we can check these predictions against what we observe.

Complete Genomics May Be Worth The Gamble I have been following Complete Genomics (GNOM) for a while now. I've even put it in my list of five favorite stocks. I really like its products; I really like its services, and I really like its CEO, Cliff Reid. By all accounts this is a great little company ready to take off like a rocket. The Eight Toughest Babies in the World We tend to think of newborns as being helpless and needy, unable to survive on their own for a day, let alone a few days. But they are surprisingly resilient and you’d be surprised what some babes can make it through. Here are 8 stories of amazing things babies have actually managed to survive through, in most of the cases, completely unscathed. Be warned: While the following stories are miraculous stories of survival, many of the tales are also quite depressing, particularly those not involving natural disasters. If you are at all sensitive to violence against children, do not continue reading. Illustrative image via j2dread [Flickr]