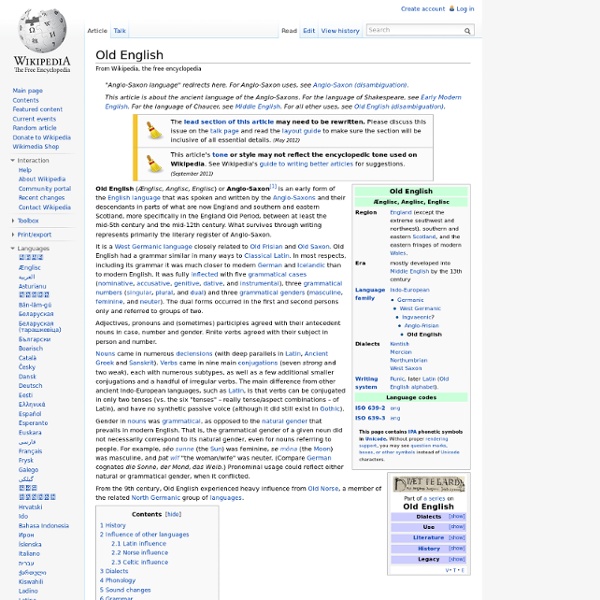 Old English (Ænglisc, Anglisc, Englisc) or Anglo-Saxon[1] is an early form of the English language that was spoken and written by the Anglo-Saxons and their descendants in parts of what are now England and southern and eastern Scotland between at least the mid-5th century and the mid-12th century. What survives through writing represents primarily the literary register of Anglo-Saxon. Adjectives, pronouns and (sometimes) participles agreed with their antecedent nouns in case, number and gender. Finite verbs agreed with their subject in person and number. Gender in nouns was grammatical, as opposed to the natural gender that prevails in modern English. From the 9th century, Old English experienced heavy influence from Old Norse, a member of the related North Germanic group of languages. History[edit] The distribution of the primary Germanic dialect groups in Europe in around AD 1: The history of Old English can be subdivided into: Influence of other languages[edit] Latin influence[edit]

Create Educational Games for School to Play on PC, Laptop, iPad, Tablet and Mobile Review Game Zone is a cloud based review game creation site where teachers can make educational games directly from their browser. To create a game simply input the question data, type the answer choices and that's it! The games are automatically created in the cloud and provide interactive review of classroom topics. The content in the games is fully personalized and customized to suit your student's needs. You can even track your students progress and results within the games. Don't have time to make a game? Create School Games in the Following Formats These games are created in the cloud so you can access or edit them from anywhere in the world plus there are no downloads or installation required. In order to play these games the student must answer a question correct, when they do they get to play part of the game as a reward. Review Game Zone allows the collection of statistical information on student performance during game play on the site.

Introduction to Intonation | English Pronunciation Lesson | Elemental English This lesson is from the Elemental English pronunciation series on Intonation: Listen to the audio!: Podcast: Play in new window Speaking and understanding English doesn’t just come from using correct grammar and vocabulary. Native English speakers convey meaning in their sentences with pitch — the ups and downs and the musical notes of their sentences. Example The following two sentences contain the same words. 1) “She got a dog.” 2) “She got a dog?!” In these two simple sentences, the focus word of the sentence–the word that gets the most emphasis–is “dog”. But what happened with the sound of the focus word? In sentence one, the intonation went DOWN to indicate the completion of the thought. In sentence two, the intonation went way UP, to indicate surprise. The patterns of ups and downs of your voice (and your pitch) on and after the focus word–which is usually at the end of a sentence or question–is called intonation. In English, there are three intonation patterns: Rise Full fall Partial fall