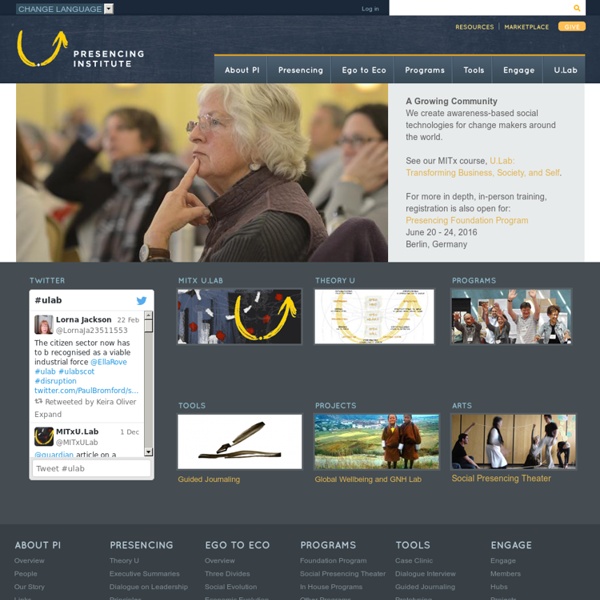 The Tree of Contemplative Practices The Tree illustrates some of the contemplative practices currently in use in secular organizational and academic settings. This is not intended to be a comprehensive list. Below the Tree you will find links to descriptions of many of these practices as well as a more in-depth description of the Tree and image files for downloading. U-procedure and Theory U U-procedure and Theory U is a change management method to change unproductive patterns of behavior. It was developed by Dr Friedrich (Fritz) Glasl and Dirk Lemson of the NPI (Netherlands Pedagogical Institute) in 1968[1][2] and presented systematically from the 1980s. It has been used in organisation development and social development since that time.[3][4][5] Following Dr Glasl's special interest in conflict issues, the method has also been explicitly developed to handle to the consciousness and process issues associated with relational dynamics and conflict resolution.[6] Since the early 2000s it has been elaborated as Theory U (also called "U" methodology) by C. Otto Scharmer, incorporating also his theories of presencing[7] and capitalism 3.0.[8] This work itself draws on collaboration between Scharmer and his colleagues Peter Senge, Joseph Jaworski and Betty Sue Flowers.[9]

Will AI Destroy Humanity? Siri, A Chatbot, And A Roboticist Weigh In In 1906 Samuel Butler pointed out that machines were evolving faster than biology, a popular refrain among Silicon Valley techies today. And ever since Karel Čapek's 1921 play R.U.R. gave us a common sci-fi trope—a race of self-replicating machine slaves revolt against their human masters—the question has been: will artificial intelligence spell the end of humanity? There was HAL in 2001: A Space Odyssey, then T-800 and T-1000 of the (soon-to-be-revived) Terminator series. These creations have always been, thankfully, relegated to the realm of speculation.

Professional Education and Training - Mindfulness - UMass Medical School Oasis Institute began in 2001 as a school for a new generation of health care and other professionals interested in learning, from the inside out, how to integrate mindfulness, mindfulness-based stress reduction (MBSR), and other mindfulness-based approaches into disciplines and communities all over the world. While this is our primary focus, Oasis Institute has a more fundamental objective, which is to foster a direct, experiential understanding that inner experience, intuition, imagination, and non-conceptual awareness are as crucial and valid as objective, evidence-based knowledge to an understanding of the world. Oasis Institute is a rigorous forum for the development and integration of these mutually effective, interdependent approaches to knowing, caring, and serving. BECOMING AN MBSR TEACHER“Cultivating wisdom is the teacher’s path.

Stephen Hawking's Communications Interface Gets Its First Overhaul In 20 Years For 20 years, Stephen Hawking has used the same system to communicate with the outside world. Now, the 70-year-old physicist, who suffers from an ALS-like motor neuron disease (MND) and is paralyzed, is getting an upgrade from Intel. In the pre-computer days, Hawking communicated through a painstaking process where a caretaker would go through a group of letters on a board, pointing line by line and letter by letter until Hawking signaled which he was looking for. Then, in the 1980s, he was offered a computer interface that had similar functionality. Once he completely lost use of his hands, his caretakers installed a sensor in his cheek that signals an input every time he moves his cheek or blinks. A voice synthesizer takes his selections and translates them into speech.

Scientists Prove That Telepathic Communication Is Within Reach From one of our previously published articles: A group of international neuroscientists and robotics engineers have discovered for the first time that human brains can indeed ‘talk’ directly to one another, even from thousands of miles away. A brain-to-brain communication study conducted in coordination with Harvard Medical School has proven that extrasensory mind-to mind interaction can happen over great distances by leveraging different pathways in the mind. (Technological telepathy) This Video Game Proves That Telepathy Is Possible A team of computational neuroscientists and psychologists at the University of Washington have managed to create telepathy in their lab, enabling one test subject to use his thoughts to control another test subject's body as he played a video game a mile away. The game was created by a team led by Rajesh P.N. Rao. The test subjects wore sensor- and magnet-filled hats that vaguely resembled Cerebro in the X-Men comics and movies.

The Golden Age Of Quantum Computing Is Upon Us (Once We Solve These Tiny Problems) Quantum computing is not easy. Researchers at IBM recently announced that they had taken a step toward solving one of its biggest challenges: developing a better way to detect and correct annoying errors. In a blog post, Mark Ritter, who oversees scientists and engineers at IBM’s T.J. Watson Research Laboratory, says: "I believe we’re entering what will come to be seen as the golden age of quantum computing research." His team, he wrote, is "on the forefront of efforts to create the first true quantum computer." First, what that would mean: A quantum computer harnesses the science of the very small—the strange behavior of subatomic particles—to solve problems that are computationally infeasible for a classical computer or simply take too long.