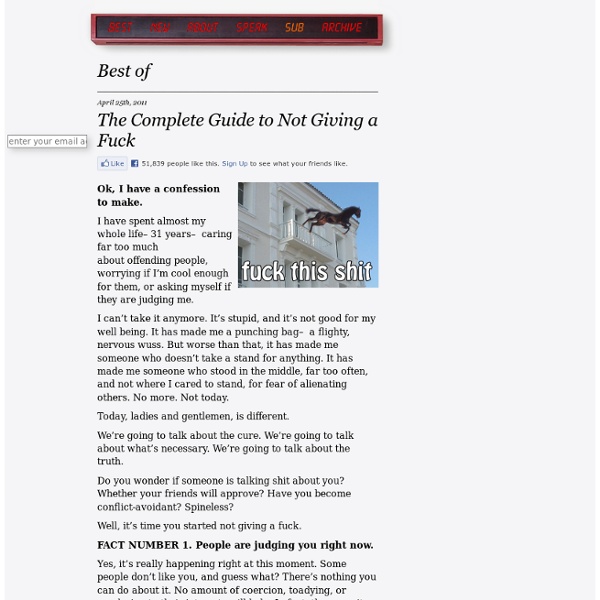 April 25th, 2011 Ok, I have a confession to make. I have spent almost my whole life– 31 years– caring far too much about offending people, worrying if I’m cool enough for them, or asking myself if they are judging me. I can’t take it anymore. It’s stupid, and it’s not good for my well being. Today, ladies and gentlemen, is different. We’re going to talk about the cure. Do you wonder if someone is talking shit about you? Well, it’s time you started not giving a fuck. FACT NUMBER 1. Yes, it’s really happening right at this moment. What people truly respect is when you draw the line and say “you will go no further.” Right. Regular people are fine– you don’t actually hear it when they’re talking behind your back. Thankfully, that’s not actually true. FACT NUMBER 2. This stuff is crazy, I know, but it’s cool, you’ll get used to it. How liberating this is may not even hit you yet, but it will. You know when they say “the best revenge is a life well lived”? FACT NUMBER 3. Relationships are weird. Related:  Food for thought

10 Most Common Rookie Mistakes in Public Speaking In this guest post, Terry Gault, Managing Partner and Vice President of The Henderson Group, provides insight into how to become a better presenter by avoiding a few common mistakes. Terry oversees all curriculum and services at The Henderson Group. In addition he is responsible for the selection, training and development of all trainers and facilitators for The Henderson Group, and has been an instructor with the Henderson Group for over 15 years. Having coached clients on presentation skills since 1997, I’ve noticed some clear patterns in the behavior of inexperienced presenters. Take a look at the prezi we've made to illustrate these 10 mistakes, and the easy ways that you can avoid them. 1. 2. 3. 4. 5. 6. 7. 8. 9. 10. a) Increase audience perception as well as your feeling of confidence and ease.b) Give your audience time to digest your key points and give those points greater impact.c) Give you time to formulate your thoughts into more succinct and cogent sentences. S-l-o-w d-o-w-n!

11 Lame-Ass Excuses You Make Every Day that are Ruining Your Life (And 11 Non-Lame-Ass Alternatives) These days, when I make a silly excuse for myself, I can usually catch it—and correct it—pretty quickly. But it wasn’t always like this. I used to struggle a lot, making excuses that kept me from doing things I really wanted to. I’d waste my time with TV and video games and not work on projects I knew would help me develop into a better person.I’d avoid hanging out with people I knew were good for me because I thought I wasn’t worthy of their attention.I’d put off important decisions about my life because I didn’t trust myself to make the right ones. I did this all the time. Today, I struggle to think of recent example I can use. Do I still make excuses? If the answer is yes, the lame-ass excuse stands! Any smart Riskologist will tell you this rule will serve you well your whole life. To properly take a risk in life, it is mandatory that you operate in reality and take responsibility for your own actions (or inactions!). Also included is a list of statements to correct your offenses. 1. 2.

How I Quickly Test and Validate Startup Ideas – Startup Bound Friday, Oct 28th 2011 at 6:04 am — Since I’ve technically been unemployed now for a week, I’ve spent most of that time brainstorming some new ideas and putting them into a Google Spreadsheet. This week I began going through that list and pulling out the ones I think have a chance and I narrowed a pretty large list down to just a few. Let’s take one of the examples from my list. It doesn’t have a name, so let’s just call it Patient Connect. The idea behind Patient Connect is that it integrates with any type of scheduling and patient management software any private medical practice or clinic uses to setup appointments for patients. The vast majority of private practices and clinics have their receptionist or anyone with some downtime call patients with upcoming appointments to give them a friendly reminder. If a patient doesn’t show for an appointment without advanced warning, that is lost time that could have been billed. First step is to create a good landing page for your campaign.

zenhabits The 15 Best Websites, According to Redditors Unraveling the ever-changing World Wide Web to find the very best sites can be a daunting and time consuming task. Or, you could just ask Reddit. That's what one Redditor did Thursday, posing to the rest of the community the question, "What is the best website other than Reddit?" Commenters sprang into action posting thousands of comment replies, naming sites that run the gamut from arcane to whimsical. Please note that the list may change as more people chime in with their opinions. 1. If you don't know what Wikipedia is by now, perhaps you should check the Wikipedia page for it. 2. Redditor "kinkyroach" compiled a diverse list of nifty sites and provided a short description for each one. 3. Don't call it a search engine. 4. This streaming media and DVD-by-mail website has revolutionized the entertainment industry. 5. This is one of the most popular sites on the Internet for pornography. 6. Check your assumptions at the door. 7. 8. 9. 10. 11. Kickstarter is the king of crowdfunding.

$700,000 per DAY with two mobile games. | Trey Smith Blog Apps Published on November 19th, 2012 | by treysmith Ok, first off I want to give a shout out to the people from my App Elite class. Lots of these guys are CRUSHING IT and I’m very proud of them. I’ve received numerous emails about people quitting their jobs and there are over 16 people who went from nothing to making over $500 net profit per day. That is freakin’ awesome. One of those guys is Sean Demeyere who owns Awesome Wicked Games. Supercell is a game company from Finland that was founded in 2010. This is interesting because there is a shift in Social Games going on that I talked about some in this post. The first social games were just about managing resources. I’ll play games with strategy for hours on end (I’m the biggest Stratego nerd I know), but just building things and waiting for things drives me nuts. Supercell jumped out into the “social games with actual gameplay and strategy” market earlier this year and are kicking ass. So how did they do it? Deconstructing Clash of Clans

Internet Marketing Done Right | The IM Wealth Builders The minimalists New to minimalism? New to our website? Welcome aboard! There’s a lot of info here, and you certainly don’t have to read it all at once, but here’s the order we suggest for beginners. Start below, find topics that add value to your life, and take your time. Start Here: Essays, Connect, New Book Free Essays. Connect via Social Media. Meet The Minimalists on Tour. New Book. Paperback: Amazon · IndieBound Ebook: Kindle · iBooks · Nook · Kobo · Google Play · PDF Audiobook: Audible · iTunes · Amazon And then… And then let us answer your questions by way of our essays… Excess Stuff Having trouble getting rid of stuff? Clutter Tired of clutter? Sentimental Items Having trouble getting rid of sentimental items? Relationships What about relationships? Gifts Tired of buying and receiving so many stupid gifts? Counting Possessions Is minimalism just about counting your stuff? Explaining Minimalism Having trouble explaining minimalism to your friends and family? Career Money Productivity Clothes Workspace Goals Time

The 100 Most Beautiful Songs in the World, According to Reddit A thread in r/AskReddit on Monday posed the question, "What is the most beautiful song you've ever heard?" User McSlurryHole challenged the community: Think to yourself, what is the most beautiful song you have ever heard, im not talking about your favourite song, or the most technical, or something that made you cry, I just want to know the song that made you say "holy shit... I could die to this" After 9,634 comments, a strong list was assembled. Subsequently, Redditor Dansecaribe collected the 100 most upvoted songs into a public Spotify playlist. SEE ALSO: From Miley Cyrus to Miles Davis in 18 Songs It's embedded below for your listening pleasure. Selections range from Debussy to Chopin to Radiohead to The Beach Boys to Sigur Ros. Which of these works gets you in the feels? Image courtesy of Flickr, martinak15.

How I Quit Using Deodorant with Magnesium Deodorant is bad. I’ve know that for a long time. But I haven’t been able to stop using it because I didn’t like having body odor, and I couldn’t find a natural deodorant that would do the job. Now that I’ve been supplementing with magnesium, my body odor is 100% gone and I’ve kicked deodorant to the curb. What’s Wrong With Using Deodorant? Aluminum, Alzheimer’s and Cancer There is evidence that the aluminum in most store-bought deodorant causes health problems, from Alzheimer’s disease to cancer. “In 1995, the Archives of Toxicology published the results of a study by French scientists from the Toxicology Laboratory at Bordeaux University: when aluminum chloride (once commonly used in antiperspirants) was applied to the shaved skin of lab mice, the aluminum in their brains doubled. Parabens and Breast Cancer Breast cancer has been increasing for over half a century. Deodorants commonly contain parabens. Parabens are absorbed through the skin and can then be stored in the body.