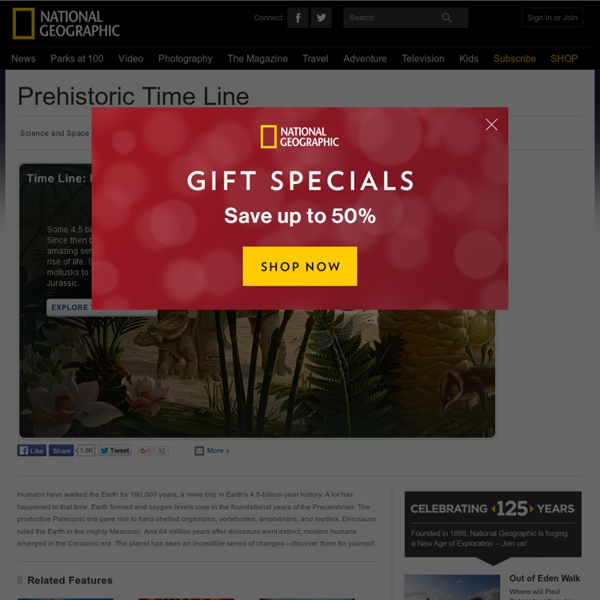 Prehistory Prehistory (meaning "before history", or "before knowledge acquired by investigation", from the Latin word for "before," præ, and historia) is the span of time before recorded history or the invention of writing systems. Prehistory refers to the period of human existence before the availability of those written records with which recorded history begins.[1] More broadly, it can refer to all the time preceding human existence and the invention of writing. The notion of "prehistory" began to surface during the Enlightenment in the work of antiquarians who used the word 'primitive' to describe societies that existed before written records.[2] The first use of the word prehistory in English, however, occurred in the Foreign Quarterly Review in 1836.[3] The occurrence of written materials (and so the beginning of local "historic times") varies generally to cultures classified within either the late Bronze Age or within the Iron Age. Definition[edit] Stone Age[edit] Paleolithic[edit] uninhabited

CLIL Module History1 3rd grade: PREHISTORY - The longest and oldest period of human history. - It began with the origins of human race and ended with the invention of writing. - It is divided into three periods: PALEOLITHIC, NEOLITHIC AND METAL AGES. To learn more about this period watch these videos: For further activities and games click here and here. Mineral Shop - Worldwide Fine Minerals and Rare Minerals for sale to ... Shipping policy Minservice will ship your order within 3 business days of receiving payment.(1) All items sold through this web site are shipped via Italian Postal Service or UPS Service expecially for insured United States shippings. Each item is individually wrapped to ensure no damage during shipping. All original labels or historic matter, if available, are included with each item. Packages will be shipped airmail, fully insured with full value declared on the package. Italian Postal Service. 1st Solution SMALL PARCEL INTERNATIONAL WITH REGISTRED AIRMAIL The parcel cannot weight more than 2 Kg TIMES OF DELIVERY (holiday days are not considered): Europe: 6-7 working days Non-European countries: within 10-15 days depending on country of destination and except customs clearance. 2nd Solution Quick Service TIMES OF DELIVERY (holiday days are not considered): Europe: delivers working days within 2-3-4 depending on the distances. New Italian Post Fares from January 1st 2014

Geology Entrance You might wish to start in the Cenozoic Era (65 million years ago to the present) and work back through time, or start with Hadean time (4.5 to 3.8 billion years ago) and journey forward to the present day. No matter "when" you start, don't forget to stop along the way to learn about the stratigraphy, ancient life, fossil localities, and tectonics of the various time periods. Here are three links that can help to speed your journey: 1) Get helpful hints on navigating the Geology Wing. 2) Read about the history of the geologic time scale, and find out more about how it is organized. 3) Jump to a specific time period using the UCMP Geological Time Machine. Last but not least, don't forget to visit our exhibit on Plate tectonics, an important geological concept in any time period!

Prehistory | La brújula del tiempo The study of History stimulates pupils’ curiosity to understand what happened in the past and how has it affected to the present. History is the memory of the human being. And if we want to understand who we are, we need to study who we were in the past. According to Integrated Curriculum for Secondary Education. Social Sciences, years 1 and 2 (Madrid, CNIIE, 2014, pp. 53-54): History fires pupil’s curiosity and imagination, moving and inspiring them with the dilemmas, choices and beliefs of people in the past. Before to begin with Prehistory, it would be recommendable to acquire several initial concepts about what is History, how to make and read time lines and about the importance of historical facts. Prehistory is the first age of human evolution. The next videos are really interesting to understand the most important ideas about Prehistory. Prehistory finished with the discovering of writing. Me gusta: Me gusta Cargando...

Magnetic poles may once have been at equator - environment - 12 April ... DID the Earth's magnetic poles once lie near the equator? That could explain puzzling changes in the magnetism of rocks millions of years ago. The Earth's magnetic poles are aligned along roughly the same axis as its rotational poles. Geologists have assumed this was also true in the past, so they use volcanic rocks, which when they formed took on an imprint of the direction and strength of the Earth's magnetic field, to infer the rocks' original latitude and to trace continental motions over the past billion years. But doing this for rocks in North America and eastern Europe is turning up a conundrum. That would imply that the ancient continents sped across the surface at ...

Geologic time scale Online exhibits Geologic time scale Take a journey back through the history of the Earth — jump to a specific time period using the time scale below and examine ancient life, climates, and geography. You might wish to start in the Cenozoic Era (65.5 million years ago to the present) and work back through time, or start with Hadean time (4.6 to 4 billion years ago)* and journey forward to the present day — it's your choice. Ways to begin your exploration: Use the links in the "time machine" below and explore a specific period that interests you.Read more about the geologic time scale, its origins and its time divisions.Find out more about plate tectonics, an important geological concept in any time period!

Geologic time scale The geologic time scale (GTS) is a system of chronological measurement that relates stratigraphy to time, and is used by geologists, paleontologists, and other earth scientists to describe the timing and relationships between events that have occurred throughout Earth's history. The table of geologic time spans presented here agrees with the nomenclature, dates and standard color codes set forth by the International Commission on Stratigraphy. Evidence from radiometric dating indicates that the Earth is about 4.54 billion years old. The geology or deep time of Earth's past has been organized into various units according to events which took place in each period. Different spans of time on the GTS are usually delimited by changes in the composition of strata which correspond to them, indicating major geological or paleontological events, such as mass extinctions. Terminology[edit] History and nomenclature of the time scale[edit] Graphical representation of Earth's history as a spiral

History of the Earth The history of the Earth concerns the development of the planet Earth from its formation to the present day.[1][2] Nearly all branches of natural science have contributed to the understanding of the main events of the Earth's past. The age of Earth is approximately one-third of the age of the universe. An immense amount of biological and geological change has occurred in that time span. The first life forms appeared between 3.8 and 3.5 billion years ago. Geological change has been constantly occurring on our planet since the time of its formation and biological change since the first appearance of life. Geological time, condensed in a diagram displaying the relative lengths of the eons of Earth's history Geologic time scale[edit] The history of the Earth is organized chronologically in a table known as the geologic time scale, which is split into intervals based on stratigraphic analysis.[2][6] A full-time scale can be found at the main article. Millions of Years Formation of the Moon[edit]

Geological history of Earth Geologic time represented in a diagram called a geological clock, showing the relative lengths of the eons of Earth's history and noting major events The geological history of Earth follows the major events in Earth's past based on the geologic time scale, a system of chronological measurement based on the study of the planet's rock layers (stratigraphy). Earth formed about 4.54 billion years ago by accretion from the solar nebula, a disk-shaped mass of dust and gas left over from the formation of the Sun, which also created the rest of the Solar System. As the surface continually reshaped itself over hundreds of millions of years, continents formed and broke apart. The present pattern of ice ages began about 40 million years ago, then intensified at the end of the Pliocene. Precambrian[edit] The Precambrian includes approximately 90% of geologic time. Hadean Eon[edit] Archean Eon[edit] By 3.5 billion years ago, the Earth's magnetic field was established. Proterozoic Eon[edit]