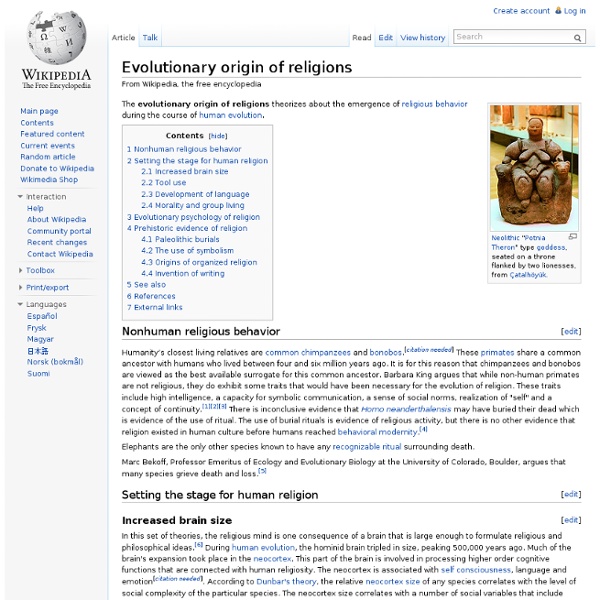 The evolutionary origin of religions theorizes about the emergence of religious behavior during the course of human evolution. Nonhuman religious behaviour[edit] Humanity’s closest living relatives are common chimpanzees and bonobos. These primates share a common ancestor with humans who lived between four and six million years ago. It is for this reason that chimpanzees and bonobos are viewed as the best available surrogate for this common ancestor. Marc Bekoff, Professor Emeritus of Ecology and Evolutionary Biology at the University of Colorado, Boulder, argues that many species grieve death and loss.[5] Setting the stage for human religion[edit] Increased brain size[edit] In this set of theories, the religious mind is one consequence of a brain that is large enough to formulate religious and philosophical ideas.[6] During human evolution, the hominid brain tripled in size, peaking 500,000 years ago. Tool use[edit] Development of language[edit] Morality and group living[edit]

Göbekli Tepe The function of the structures is not yet clear. The most common opinion, shared by excavator Klaus Schmidt, is that they are early neolithic sanctuaries. Discovery[edit] The site was first noted in a survey conducted by Istanbul University and the University of Chicago in 1963. In 1994, Klaus Schmidt, now of the German Archaeological Institute, who had previously been working at Nevalı Çori, was looking for another site to lead a dig. The following year, he began excavating there in collaboration with the Şanlıurfa Museum. Dating[edit] View of site and excavation The imposing stratigraphy of Göbekli Tepe attests to many centuries of activity, beginning at least as early as the epipaleolithic, or Pre-Pottery Neolithic A (PPNA), in the 10th millennium BC. There are a number of radiocarbon dates (presented with one standard deviation errors and calibrations to BCE): The Hd samples are from charcoal in the lowest levels of the site and would date the active phase of occupation. Plateau[edit]

Religion, World Religions, Comparative Religion - Just the facts on the world's religions. Pyramid Texts Pyramid texts from Teti I's pyramid. The Pyramid Texts are a collection of ancient Egyptian religious texts from the time of the Old Kingdom. They are possibly the oldest known religious texts in the world.[1][2] Written in Old Egyptian, the pyramid texts were carved on the walls and sarcophagi of the pyramids at Saqqara during the 5th and 6th Dynasties of the Old Kingdom. The spells, or "utterances", of the pyramid texts are primarily concerned with protecting the pharaoh's remains, reanimating his body after death, and helping him ascend to the heavens, which are the emphasis of the afterlife during the Old Kingdom. Versions[edit] The texts were first discovered in 1881 by Gaston Maspero, and translations were made by Kurt Heinrich Sethe (in German), Louis Speleers (in French), Raymond O. The oldest version consists of 228 spells and comes from the Pyramid of Unas, who was the last king of the 5th Dynasty. Examples[edit] After death, the king must first rise from his tomb. Oho! Notes

Religion Religious activities around the world Many religions may have organized behaviors, clergy, a definition of what constitutes adherence or membership, holy places, and scriptures. The practice of a religion may include rituals, sermons, commemoration or veneration (of a deity, gods or goddesses), sacrifices, festivals, feasts, trance, initiations, funerary services, matrimonial services, meditation, prayer, music, art, dance, public service or other aspects of human culture. Etymology Religion (from O.Fr. religion "religious community," from L. religionem (nom. religio) "respect for what is sacred, reverence for the gods,"[11] "obligation, the bond between man and the gods"[12]) is derived from the Latin religiō, the ultimate origins of which are obscure. Many languages have words that can be translated as "religion", but they may use them in a very different way, and some have no word for religion at all. Definitions Theories Origins and development The origin of religion is uncertain.

Raëlism Raëlism , or the Raëlian Movement , is a UFO religion that was founded in 1974 by Claude Vorilhon , now known as Raël . It is numerically the world's second largest UFO religion, after Scientology . [ 2 ] An adherent of Raelism is a Raelian . The Raëlian Movement teaches that life on Earth was scientifically created by a species of extraterrestrials , which they call the Elohim . Members of this species appeared human and when having personal contacts with the descendants of the humans they made, they previously misinformed (on purpose) early humanity that they were angels , cherubim or gods . The Raëlian Church has a quasi-clerical structure of seven levels. Raelian ethics include striving for world peace , sharing, democracy and nonviolence . [ 7 ] Sexuality is also an important part of the Raëlian doctrine. [ edit ] History Membership estimates from various sources From 1980 to 1992 Raël and his movement became increasingly global. [ edit ] Member hierarchy [ edit ] Women-only groups

Jerusalem syndrome The Jerusalem syndrome is a group of mental phenomena involving the presence of either religiously themed obsessive[disambiguation needed] ideas, delusions or other psychosis-like experiences that are triggered by a visit to the city of Jerusalem. It is not endemic to one single religion or denomination but has affected Jews, Christians and Muslims of many different backgrounds. The best known, although not the most prevalent, manifestation of the Jerusalem syndrome is the phenomenon whereby a person who seems previously balanced and devoid of any signs of psychopathology becomes psychotic after arriving in Jerusalem. The psychosis is characterised by an intense religious theme and typically resolves to full recovery after a few weeks or after being removed from the area. In a 2000 article in the British Journal of Psychiatry, Bar-El et al.[1] claim to have identified and described a specific syndrome which emerges in tourists with no previous psychiatric history. History[edit]

Top 10 Bizarre Mormon Beliefs Religion Every religion has unique beliefs. This is a list of odd LDS beliefs. Each Item on the list quotes LDS scripture so you can be sure it is authentic. 10. While tithes are not uncommon among religion, rarely are they mandatory. 9. This is one of the most famous pieces of LDS doctrine. 8. This one is very unique to the LDS faith. 7. Almost everyone who knows anything about the Mormon religion knows they have a prophet. 6. The Book of Mormon is a book of LDS scripture that takes place during the same time as the Bible and takes place on the American continent. 5. While most religions believe in God, the LDS religion believes in God, Jesus and the Holy Spirit as separate beings. D&C 130: 22-23 22 The Father has a body of flesh and bones as tangible as man’s; the Son also; but the Holy Ghost has not a body of flesh and bones, but is a personage of Spirit. 4. In the LDS religion any worthy male can be given the priesthood and is given specific duties. 3. 2. 1. Contributor: Mystern