Uk.businessinsider. Shutterstock The world is going to be a very different place in 2045. Predicting the future is fraught with challenges, but when it comes to technological advances and forward thinking, experts working at the Pentagon's research agency may be the best people to ask. Launched in 1958, the Defense Advanced Research Projects Agency is behind some of the biggest innovations in the military — many of which have crossed over to the civilian technology market. These include things like advanced robotics, global positioning systems, and the Internet. AI Catches Psychosis Before It Happens. Automated speech analysis predicts psychotic episodes with 100% accuracy. 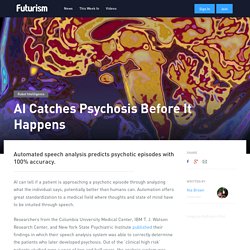 AI can tell if a patient is approaching a psychotic episode through analyzing what the individual says, potentially better than humans can. Automation offers great standardization to a medical field where thoughts and state of mind have to be intuited through speech. Researchers from the Columbia University Medical Center, IBM T. J. Watson Research Center, and New York State Psychiatric Institute published their findings in which their speech analysis system was able to correctly determine the patients who later developed psychosis.

Buy it here. (Or see a preview.) Note: The reason this post took three weeks to finish is that as I dug into research on Artificial Intelligence, I could not believe what I was reading. It hit me pretty quickly that what’s happening in the world of AI is not just an important topic, but by far THE most important topic for our future. So I wanted to learn as much as I could about it, and once I did that, I wanted to make sure I wrote a post that really explained this whole situation and why it matters so much. We are on the edge of change comparable to the rise of human life on Earth. — Vernor Vinge What does it feel like to stand here? It seems like a pretty intense place to be standing—but then you have to remember something about what it’s like to stand on a time graph: you can’t see what’s to your right. Which probably feels pretty normal… The Far Future—Coming Soon This works on smaller scales too. 1. The Evolution of Thinking Machines.

Meet the man who has been at the forefront of AI innovation for three decades. Geoffrey Hinton was in high school when a friend convinced him that the brain worked like a hologram. 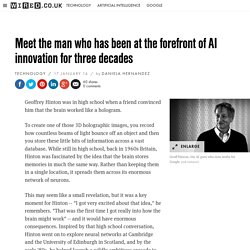 To create one of those 3D holographic images, you record how countless beams of light bounce off an object and then you store these little bits of information across a vast database. While still in high school, back in 1960s Britain, Hinton was fascinated by the idea that the brain stores memories in much the same way. Rather than keeping them in a single location, it spreads them across its enormous network of neurons. This may seem like a small revelation, but it was a key moment for Hinton -- "I got very excited about that idea," he remembers.

"That was the first time I got really into how the brain might work" -- and it would have enormous consequences. For a good three decades, the deep learning movement was an outlier in the world of academia. He doesn't have all the answers yet. In Hinton's world, a neural network is essentially software that operates at multiple levels. MIT Computer Science and Artificial Intelligence Laboratory. AI in 2025. The Current State of Machine Intelligence. (The 2016 Machine Intelligence landscape and post can be found here) I spent the last three months learning about every artificial intelligence, machine learning, or data related startup I could find — my current list has 2,529 of them to be exact. 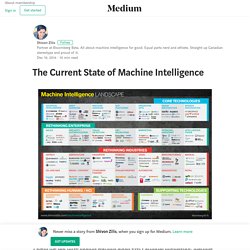 Reflections on the landscape: Top notch AI system about as smart as a four-year-old, lacks commonsense. Researchers have found that an AI system has an average IQ of a four-year-old child (Image: Shutterstock) Those who saw IBM’s Watson defeat former winners on Jeopardy! 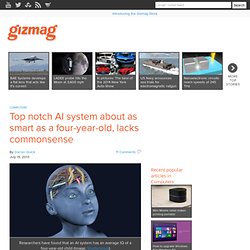 In 2011 might be forgiven for thinking that artificially intelligent computer systems are a lot brighter than they are. While Watson was able to cope with the highly stylized questions posed during the quiz, AI systems are still left wanting when it comes to commonsense. This was one of the factors that led researchers to find that one of the best available AI systems has the average IQ of a four-year-old. To see just how intelligent AI systems are, a team of artificial and natural knowledge researchers at the University of Illinois as Chicago (UIC) subjected ConceptNet 4 to the verbal portions of the Weschsler Preschool and Primary Scale of Intelligence Test, which is a standard IQ test for young children.