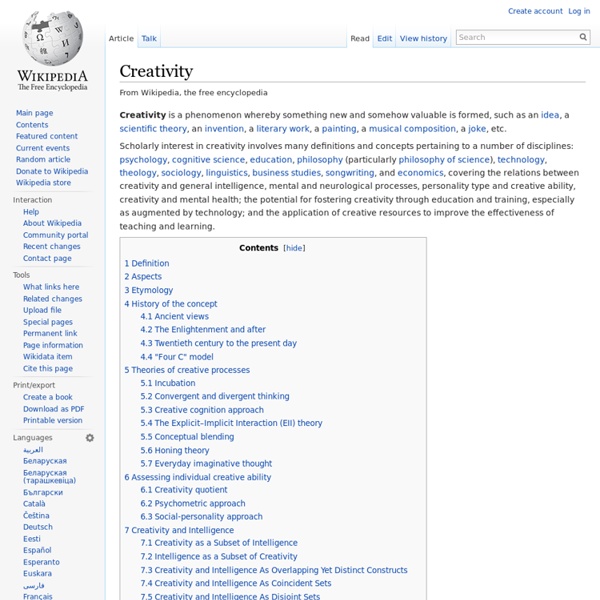 Creativity is a phenomenon whereby something new and somehow valuable is formed, such as an idea, a scientific theory, an invention, a literary work, a painting, a musical composition, a joke, etc. Scholarly interest in creativity involves many definitions and concepts pertaining to a number of disciplines: psychology, cognitive science, education, philosophy (particularly philosophy of science), technology, theology, sociology, linguistics, business studies, songwriting, and economics, covering the relations between creativity and general intelligence, mental and neurological processes, personality type and creative ability, creativity and mental health; the potential for fostering creativity through education and training, especially as augmented by technology; and the application of creative resources to improve the effectiveness of teaching and learning. Definition[edit] Aspects[edit] Etymology[edit] History of the concept[edit] Ancient views[edit] The Enlightenment and after[edit] J. J.

Creativity techniques Creativity techniques are methods that encourage creative actions, whether in the arts or sciences. They focus on a variety of aspects of creativity, including techniques for idea generation and divergent thinking, methods of re-framing problems, changes in the affective environment and so on. They can be used as part of problem solving, artistic expression, or therapy. Some techniques require groups of two or more people while other techniques can be accomplished alone. These methods include word games, written exercises and different types of improvisation, or algorithms for approaching problems.

Thinking outside the box The "nine dots" puzzle. The goal of the puzzle is to link all 9 dots using four straight lines or fewer, without lifting the pen and without tracing the same line more than once. One solution appears below. Thinking outside the box (also thinking out of the box[1][2] or thinking beyond the box) is a metaphor that means to think differently, unconventionally, or from a new perspective. This phrase often refers to novel or creative thinking.

Six tools to improve your creativity during an innovation process — Business Model Innovation Lab Mind maps are usually a great way to organize ideas. We can use them to explore associations and divergences between ideas, clustering all those concepts coming from ideation. Mind maps will help to identify underlying trends, cleaning redundancies and narrowing our scope to fewer concepts to work with. Serendipity Serendipity means a "fortunate happenstance" or "pleasant surprise". It was coined by Horace Walpole in 1754. In a letter he wrote to a friend Walpole explained an unexpected discovery he had made by reference to a Persian fairy tale, The Three Princes of Serendip. The princes, he told his correspondent, were “always making discoveries, by accidents and sagacity, of things which they were not in quest of”. The notion of serendipity is a common occurrence throughout the history of scientific innovation such as Alexander Fleming's accidental discovery of penicillin in 1928 and the invention of the microwave oven by Percy Spencer in 1945, the invention of the Post-it note by Spencer Silver in 1968.

Creativity Tools for Developing Creative Solutions from MindTools.com Got it! We use cookies to give you the best experience of our website. More on this. Magical thinking Magical thinking is the attribution of causal relationships between actions and events which cannot be justified by reason and observation. In religion, folk religion, and superstitious beliefs, the correlation posited is often between religious ritual, prayer, sacrifice, or the observance of a taboo, and an expected benefit or recompense. In clinical psychology, magical thinking can cause a patient to experience fear of performing certain acts or having certain thoughts because of an assumed correlation between doing so and threatening calamities. Magical thinking may lead people to believe that their thoughts by themselves can bring about effects in the world or that thinking something corresponds with doing it.[1] It is a type of causal reasoning or causal fallacy that looks for meaningful relationships of grouped phenomena (coincidence) between acts and events.

Creative Thinking: Techniques and Tools for Success Module 1 In the first module we focus on the basic principles of creativity and highlight its importance in tackling global challenges. Creativity is explored and applied at two different levels, lower and higher-level creativity. Throughout, we're aiming to provoke your thoughts and develop your creative mind through varied activities and interactions. Module 2 In this module, we will look at how we can augment our creativity using different methods of Brainstorming, a creativity approach that aids the generation of ideas in solving a stated problem. We particularly focus on the application of brainstorming tools in group activities, with the aim of enabling you to understand, evaluate and apply different types of brainstorming techniques in your own context.

Six Thinking Hats Six Thinking Hats is a book by Edward de Bono which describes a tool for group discussion and individual thinking involving six colored hats. "Six Thinking Hats" and the associated idea parallel thinking provide a means for groups to plan thinking processes in a detailed and cohesive way, and in doing so to think together more effectively.[2] Underlying principles[edit] The content strategy discovery tool In the last year we’ve encountered quite a few new obstacles with =importXML() that mean creating version 3 has been rather challenging. We’ve changed the way this tool operates, switching away from =importXML() and instead, we’re using several different methods for data collection: =ImportFeed() e.g. =ImportFEED(A1, “items title”) Pulls the content of RSS feeds directly to Google docs, but can be filtered to return specific properties.

Creativity is rejected: Teachers and bosses don’t value out-of-the-box thinking. In the United States we are raised to appreciate the accomplishments of inventors and thinkers—creative people whose ideas have transformed our world. We celebrate the famously imaginative, the greatest artists and innovators from Van Gogh to Steve Jobs. Viewing the world creatively is supposed to be an asset, even a virtue. Online job boards burst with ads recruiting “idea people” and “out of the box” thinkers. We are taught that our own creativity will be celebrated as well, and that if we have good ideas, we will succeed.