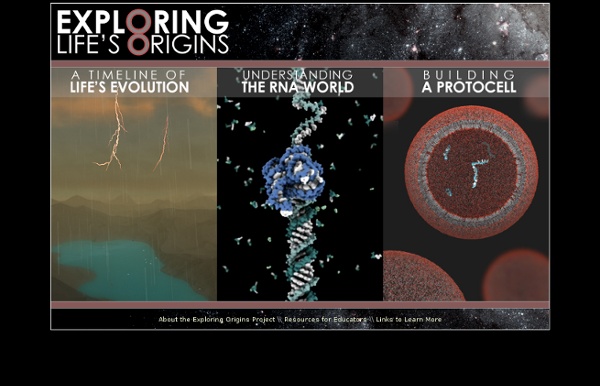 Yes, We Should Clone Neanderthals 30,000 years ago a Neanderthal woman died in what would become Croatia’s Vindija cave. Five years ago, 454 Life Sciences and the Max Planck Institute started working together on the tedious and time-consuming task of piecing her fossilized DNA back together. Just over a month ago, they succeeded and, in the process, revealed that most of us are between 1% and 4% Neanderthal.

Top 10 Signs Of Evolution In Modern Man Humans Through history, as natural selection played its part in the development of modern man, many of the useful functions and parts of the human body become unnecessary. What is most fascinating is that many of these parts of the body still remain in some form so we can see the progress of evolution. This list covers the ten most significant evolutionary changes that have taken place – leaving signs behind them. Goose Bumps Tree of Life Web Project The Tree of Life Web Project (ToL) is a collaborative effort of biologists and nature enthusiasts from around the world. On more than 10,000 World Wide Web pages, the project provides information about biodiversity, the characteristics of different groups of organisms, and their evolutionary history (phylogeny). Each page contains information about a particular group, e.g., salamanders, segmented worms, phlox flowers, tyrannosaurs, euglenids, Heliconius butterflies, club fungi, or the vampire squid. ToL pages are linked one to another hierarchically, in the form of the evolutionary tree of life. Starting with the root of all Life on Earth and moving out along diverging branches to individual species, the structure of the ToL project thus illustrates the genetic connections between all living things.

Ten Recent Advances in Evolution By Carl Zimmer Posted 10.26.09 NOVA To celebrate the 150th anniversary of the Origin of Species, here's a list—by no means exhaustive—of some of the biggest advances in evolutionary biology over the past decade. These advances include not just a better understanding of how this or that group of species first evolved, but insights into the evolutionary process itself. In some cases those insights would have given Darwin himself a pleasant jolt of surprise. Ten significant leaps forward in evolution research in the past decade, as chosen and described by noted science writer Carl Zimmer Enlarge Photo credit: (Earth) © NASA; (text) © WGBH Educational Foundation The brain is actually wired like a chess board and a new scanner reveals how in stunning detail By Ted Thornhill Published: 10:04 GMT, 30 March 2012 | Updated: 15:31 GMT, 30 March 2012 For a long time it was thought that the brain was a mass of tangled wires, but researchers recently found that its fibers are actually set up like a chess board, crossing at right-angles. What’s more, this grid structure has now been revealed in amazing detail as part of a brain imaging study by a new state-of-the-art magnetic resonance imaging (MRI) scanner. Van Wedeen, of Massachusetts General Hospital (MGH), who led study, said: ‘Far from being just a tangle of wires, the brain's connections turn out to be more like ribbon cables - folding 2D sheets of parallel neuronal fibers that cross paths at right angles, like the warp and weft of a fabric.

Understanding Evolution The bacteria that changed the world - May, 2017 The make-up of Earth's atmosphere, once the domain of Earth science textbooks, has become an increasingly "hot" news topic in recent decades, as we struggle to curb global warming by limiting the carbon dioxide that human activity produces. While the changes that humanity has wrought on the planet are dramatic, this isn’t the first time that one species has changed Earth’s atmosphere. Three billion years ago, there was no free oxygen in the atmosphere at all. Life was anaerobic, meaning that it did not need oxygen to live and grow.

The Simulation News and Announcements The Human Brain Project to present at Swisstech Open Days Representatives of the Human Brain Project (HBP) will be presenting at the grand opening of the Swiss Tech Convention Center, at EPFL in Lausanne on the weekend of 5-6 April 2014. The presentation will consist of a global overview of the project, followed by a projection of the 3D HBP movie and a 10-minute Q&A session. This event will be open to the public. The Human Brain Project Blue Brain’s success in modeling the rat cortical column has driven the development of the Brain Simulation Facility and has demonstrated the feasibility of the project’s general strategy. But, this is only a first step. The human brain is an immensely powerful, energy efficient, self-learning, self-repairing computer.

Teaching materials Teaching materials Evolution is essential to our curriculum and to scientific literacy. Imagine teaching social science without teaching history; students would lack perspective on events going on today. Similarly, to understand the big picture of biology, students need to understand life on Earth in terms of its history and its future — the changing life forms and ecosystems that have arisen and changed over billions of years, as well as the mechanisms that have brought about those changes. The Understanding Evolution project aims to help instructors develop student understanding of: