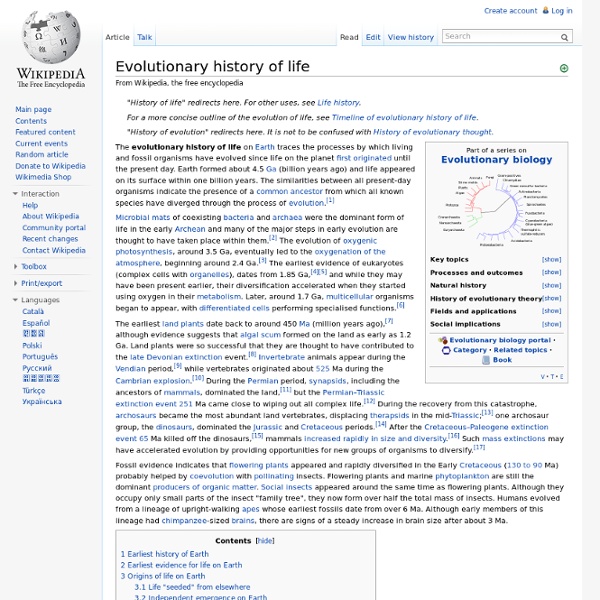 "Evolution is Fact" A Cartography of the Anthropocene The Anthropocene: A primer. The Anthropocene. We’re already there. This is our time, our creation, our challenge. Officially, this epoch does not exist. Yet. Unofficially however, the term is used more frequently in the scientific literature and, more recently, in publications dedicated to the general public. So, might you ask, what is the Anthropocene? First, the etymology. The term was proposed in 2000 by Paul J. Technically, the Anthropocene is the most recent period of the Quaternary, succeding to the Holocene. The Pleistocene (2.588 Ma to 11.7 Ka) was a tumultuous era, during which more than eleven major glaciations occurred. The Holocene (11.7 ka until about 1800 AD) was a time comparatively smoother in terms of climate variability. We are officially still in the Holocene. We collectively rolled over into a new era, which includes its stakes and challenges but also its opportunities and great qualities. Mapping the Anthropocene: first few steps. Comments?

A New Thermodynamics Theory of the Origin of Life Why does life exist? Popular hypotheses credit a primordial soup, a bolt of lightning and a colossal stroke of luck. But if a provocative new theory is correct, luck may have little to do with it. Instead, according to the physicist proposing the idea, the origin and subsequent evolution of life follow from the fundamental laws of nature and “should be as unsurprising as rocks rolling downhill.” From the standpoint of physics, there is one essential difference between living things and inanimate clumps of carbon atoms: The former tend to be much better at capturing energy from their environment and dissipating that energy as heat. Jeremy England, a 31-year-old assistant professor at the Massachusetts Institute of Technology, has derived a mathematical formula that he believes explains this capacity. Kristian Peters Cells from the moss Plagiomnium affine with visible chloroplasts, organelles that conduct photosynthesis by capturing sunlight. Courtesy of Jeremy England Wilson Bentley

Sea anemone: genetically ½ animal, ½ plant A team led by evolutionary and developmental biologist Ulrich Technau at the University of Vienna has discovered that sea anemones display a genomic landscape with a complexity of regulatory elements similar to that of fruit flies or other animal model systems. This suggests that this principle of gene regulation is already 600 million years old and dates back to the common ancestor of human, fly and sea anemone. On the other hand, sea anemones are more similar to plants rather to vertebrates or insects in their regulation of gene expression by short regulatory RNAs called microRNAs. These surprising evolutionary findings are published in two articles in the journal Genome Research. Our appearance, the shape we have and how our body works is, in addition to environmental influences, largely the result of the action of our genes. However, genes are rarely single players, they rather act in concert and regulate each other's activity and expression in gene regulatory networks. …and in plants

CRACKED: 7 Animals That Are Evolving Right Before Our Eyes People who doubt evolution tend to have one main argument: "If evolution is true, why do we still see monkeys running around today, all chimp-like? Where are all the monkey-men I was promised?" Well, if you or someone you know refuses to believe that organisms change over time without proof on a monkey-man level, here are a buttload of animals in the middle of getting their evolve on. Well, seven anyway. Elephants are Evolving to Lose Their Tusks (and Avoid Poachers) Here's a joke: What did the elephant say to the poacher? Getty"Stop! Sorry about that. GettyAnd ever since animal rights got involved, unemployment has shot up 300 percent. So elephants have decided to take matters into their own hands ... or trunks or weirdly rounded three-toed feet or whatever. By 2005, it was estimated that the tuskless population had risen to between 5 and 10 percent. GettyJust like your debilitating lisp after reading that out loud Russian Dogs are Evolving to Learn the Subways Getty Check it: Via MSNBC

Tree of Life Web Project The Tree of Life Web Project (ToL) is a collaborative effort of biologists and nature enthusiasts from around the world. On more than 10,000 World Wide Web pages, the project provides information about biodiversity, the characteristics of different groups of organisms, and their evolutionary history (phylogeny). Each page contains information about a particular group, e.g., salamanders, segmented worms, phlox flowers, tyrannosaurs, euglenids, Heliconius butterflies, club fungi, or the vampire squid. ToL pages are linked one to another hierarchically, in the form of the evolutionary tree of life. Starting with the root of all Life on Earth and moving out along diverging branches to individual species, the structure of the ToL project thus illustrates the genetic connections between all living things.

Evolution of life's operating system revealed in detail Posted June 30, 2014 | Atlanta, GA The evolution of the ribosome, a large molecular structure found in the cells of all species, has been revealed in unprecedented detail in a new study. Click image to enlarge In a new study, scientists compared three-dimensional structures of ribosomes from a variety of species of varying biological complexity, including humans, yeast, bacteria and archaea. Around 4 billion years ago, the first molecules of life came together on the early Earth and formed precursors of modern proteins and RNA. The core of the ribosome is essentially the same in all living systems, while the outer regions expand and become complicated as species gain complexity. “The history of the ribosome tells us about the origin of life,” said Loren Williams, a professor in the School of Chemistry and Biochemistry at the Georgia Institute of Technology. The study was sponsored by the NASA Astrobiology Institute and the Center for Ribosomal Origins and Evolution at Georgia Tech.

Deep sea 'mushroom' may be new branch of life 3 September 2014Last updated at 17:43 ET By Paul Rincon Science editor, BBC News website The bizarre creatures were collected from the deep sea in 1986 during a research cruise off Tasmania A mushroom-shaped sea animal discovered off the Australian coast has defied classification in the tree of life. A team of scientists at the University of Copenhagen says the tiny organism does not fit into any of the known subdivisions of the animal kingdom. Such a situation has occurred only a handful of times in the last 100 years. The organisms, which were originally collected in 1986, are described in the academic journal Plos One. The authors of the article note several similarities with the bizarre and enigmatic soft-bodied life forms that lived between 635 and 540 million years ago - the span of Earth history known as the Ediacaran Period. Continue reading the main story “Start Quote We think it belongs in the animal kingdom somewhere, the question is where”