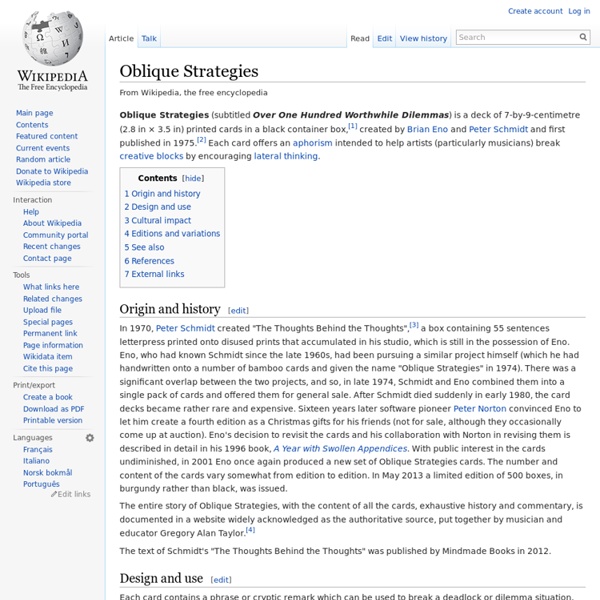 Origin and history[edit] The entire story of Oblique Strategies, with the content of all the cards, exhaustive history and commentary, is documented in a website widely acknowledged as the authoritative source, put together by musician and educator Gregory Alan Taylor.[4] The text of Schmidt's "The Thoughts Behind the Thoughts" was published by Mindmade Books in 2012. Design and use[edit] Each card contains a phrase or cryptic remark which can be used to break a deadlock or dilemma situation. Some are specific to music composition; others are more general. Use an old idea.State the problem in words as clearly as possible.Only one element of each kind.What would your closest friend do? From the introduction to the 2001 edition: These cards evolved from separate observations of the principles underlying what we were doing. Cultural impact[edit] Editions and variations[edit] See also[edit] References[edit] External links[edit] Related:  Tools

How to Tell if You Are Indigo Here is an in-depth article describing what traits to look for in determining if you or someone you know is an indigo child or adult. When talking to people about indigos I often hear that the characteristics are not specific and practically anyone could consider themselves an indigo. Therefore in this article I’m going try to be as clear as possible in describing the things that make indigos DIFFERENT from other people. In the first part of the article I’ll try to define indigos, and in the second part I’ll get into listing their particular characteristics. This is now the second edition of this article, as it has been rewritten and expanded since 24/10/2011. About The Term “Indigo” The actual term “indigo” may have come from the colour of the sixth chakra (energy center) or third eye chakra. Note that indigo in this context is not the colour of the aura. I don’t know how much meaning any of these ideas have but I’ve offered them for your consideration. What Is An Indigo? So. 1. 2. 3. 4.

Situation puzzle Situation puzzles are often referred to as lateral thinking puzzles or "yes/no" puzzles. Situation puzzles are usually played in a group, with one person hosting the puzzle and the others asking questions which can only be answered with a "yes" or "no" answer. Depending upon the settings and level of difficulty, other answers, hints or simple explanations of why the answer is yes or no, may be considered acceptable. These puzzles are inexact and many puzzle statements have more than one possible fitting answer. Example[edit] One situation puzzle would be: A man walks into a bar, and asks the bartender for a drink of water. The question and answer segment might go something like this. Question: Could the bartender hear him? Eventually the questions lead up to the conclusion that the man had the hiccups, and that his reason for requesting a drink of water was not to quench his thirst but to cure his hiccups. Terminology[edit] See also[edit] Further reading[edit] References[edit]

The Meaning of the Quincunx or Inconjunct Aspects in Astrology The inconjunct or quincunx (the terms are generally used interchangeably) aspect in astrology is formed between planets that are roughly 150 degrees apart. If we use an orb of 2 degrees, the planets or points in question can be anywhere from 148 degrees to 152 degrees apart. The planets and points involved in a quincunx don't understand each other. Unless it's an out-of-sign quincunx, the signs not only are of a different element, they are also of a different modality. For example, take Leo-Pisces. Leo is Fixed Fire, while Pisces is Mutable Water. Some keywords that describe quincunxes are: redirecting, challenging, requiring adjustments, diverting. What I have found is that people with quincunxes tend to compartmentalize the two areas of life indicated by the planets and points involved. When we express one of the planets or points involved in an opposition, the other planet or point feels "left out". A couple of examples will shed some more light on the theory.

The Kipling method Creative tools > The Kipling method (5W1H) When to use it | How to use it | Example | How it works | See also When to use it Use the Kipling questions at any time or when you need to get an extra stimulus. They are good for unsticking creative session, when people dry up and run out of ideas. They are also useful to help take different views when defining the problem. You can also use it to ask questions when selecting an idea to carry forward for further development. How to use it Rudyard Kipling used a set of questions to help trigger ideas and solve problems and immortalized them in the poem: I have six honest serving men They taught me all I knew I call them What and Where and When And How and Why and Who These questions can be used as stimuli to get thinking going in many situations. Ask a question The simple approach is to take one of the questions, either at random or with a more particular purpose in mind and ask it of the situation. Extend the questions How much? What is the problem? Example

Po (lateral thinking) A "po" is an idea which moves thinking forward to a new place from where new ideas or solutions may be found. The term was created by Edward de Bono as part of a lateral thinking technique to suggest forward movement, that is, making a statement and seeing where it leads to. It is an extraction from words such as hypothesis, suppose, possible and poetry, all of which indicate forward movement and contain the syllable "po." Po can be taken to refer to any of the following: provoking operation, provocative operation or provocation operation. Also, in ancient Polynesian and the Maori, the word "po" refers to the poporiginal chaotic state of formlessness, from which evolution occurred. For example, Sales are dropping off because our product is perceived as old fashioned. Some of the above ideas may be impractical, not sensible, not business-minded, not politically correct, or just plain daft. Edward de Bono.

Interpreting the Solar Return Your birthday horoscope is a wheel-shaped chart indicating the positions of the planets in relation to the earth at the time of the yearly return of the Sun to the exact position it held when you were born. This chart shows what is in store for the coming year. It's rather like an auxiliary of your birth horoscope, painting a picture of this one-year period. Also called a Solar Return, astrology programs calculate these to the precise moment that the Sun in the sky returns to its natal position. Like taking a snapshot, the configurations in the sky at that moment become your blueprint for the year. Because it is so precise, you'll usually have a different sign rising than you did at birth. CalculationUsing the location of your residence at the time of the birthday is recommended. If you're using an astrology program to calculate your Solar Return, select the Tropical zodiac and Placidus house system. "The two charts are actually in agreement. Is there a Stellium in one house?

Derailment (thought disorder) In psychiatry, derailment (also loosening of association, asyndesis, asyndetic thinking, knight's move thinking, or entgleisen) is a thought disorder characterized by discourse consisting of a sequence of unrelated or only remotely related ideas. The frame of reference often changes from one sentence to the next.[1][2] In a mild manifestation, this thought disorder is characterized by slippage of ideas further and further from the point of a discussion. Some of the synonyms given above (loosening of association, asyndetic thinking) are used by some authors to refer just to a loss of goal: discourse that sets off on a particular idea, wanders off and never returns to it. "The next day when I'd be going out you know, I took control, like uh, I put bleach on my hair in California." Entgleisen (derailment in German) was first used with this meaning by Carl Schneider in 1930.[2] The term asyndesis was introduced by N. ^ Jump up to: a b P.J.