The Timescale of Life 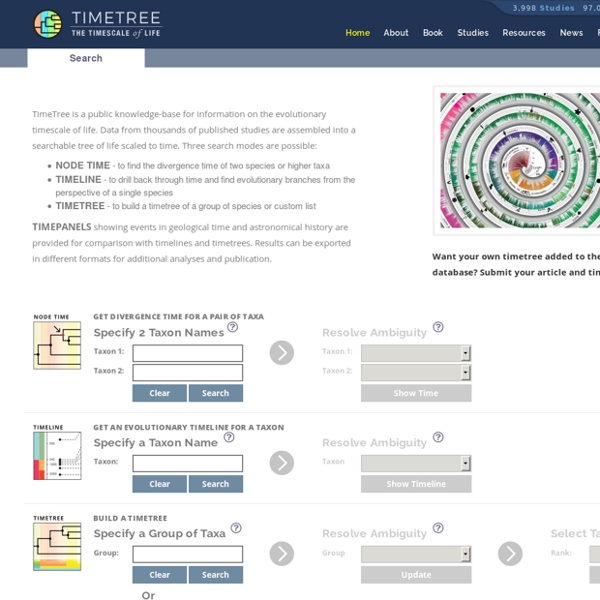 Caught in the act Most animals, plants and other organisms possess a broad range of traits, or features. For instance, within a species, some individuals might be bigger. Some might be faster or better camouflaged. Others might have genes that allow them to resist disease, better digest some foods or even learn new tasks more quickly. Many traits help an organism survive and reproduce. These traits often can be inherited. Soils are the foundation for vegetation Healthy soils are crucial for ensuring the continued growth of natural and managed vegetation, providing feed, fibre, fuel, medicinal products and other ecosystem services such as climate regulation and oxygen production. Soils and vegetation have a reciprocal relationship. Fertile soil encourages plant growth by providing plants with nutrients, acting as a water holding tank, and serving as the substrate to which plants anchor their roots. In return, vegetation, tree cover and forests prevent soil degradation and desertification by stabilizing the soil, maintaining water and nutrient cycling, and reducing water and wind erosion.

Creative Routines “We all have the same 24 hours that Beyoncé has” and its various iterations took the web by storm in late 2013 as the megastar became the figurehead of not only having it all, but being able to somehow do it all too. How do creatives – composers, painters, writers, scientists, philosophers – find the time to produce their opus? Mason Currey investigated the rigid Daily Rituals that hundreds of creatives practiced in order to carve out time, every day, to work their craft. Some kept to the same disciplined regimen for decades while others locked in patterns only while working on specific works. Creative Routines Poster

Fluid Simulator Check out my blog! E-mail: kotsoft@gmail.com Fluid ENSI/SENSI: Evolution/Nat.of Sci.Home Page 14 January 2016 Announcing the 2016 Evolution Film Festival and Video Contest! Scientists and science educators of all stripes — students, postdocs, faculty, and full- or part-time science communicators — are invited to enter the Sixth Annual Evolution Video Competition, sponsored by the Duke Initiative for Science & Society, the Howard Hughes Medical Institute (HHMI), the Society for the Study of Evolution (SSE) and the BEACON Center for the Study of Evolution in Action. Researchers draft the first comprehensive tree of life It's very poetic to talk about a tree of life, where every species can trace its roots, but actually illustrating this tree is no mean feat when Earth has been home to at least 2.3 million known species. However, scientists have finally given it a shot. They've published the first draft of a comprehensive tree of life that shows every major evolutionary branch, ranging from the very first organisms to complex beings like humans.

Evolution in Paradise We are pleased to bring you three exciting lessons inspired by the birds-of-paradise! These lessons explore the topics of science process, natural and sexual selection, behavior and heritability through hands-on activities and lively discussions… all with the help of the Birds-of Paradise Project videos. This free download is perfect for middle and high school classrooms. Read more about this exciting resource or simply click the button to download. Origin of Species Revisions The Preservation of Favoured Traces Charles Darwin first published On the Origin of Species in 1859, and continued revising it for several years. As a result, his final work reads as a composite, containing more than a decade’s worth of shifting approaches to his theory of evolution. In fact, it wasn’t until his fifth edition that he introduced the concept of “survival of the fittest,” a phrase that actually came from philosopher Herbert Spencer. By color-coding each word of Darwin’s final text by the edition in which it first appeared, our latest book and poster of his work trace his thoughts and revisions, demonstrating how scientific theories undergo adaptation before their widespread acceptance.

A Pentecostal, Evangelical Naturalist?! The following is cross-posted from my new Emergent Village Voice blog, here. I’m often described in the mainstream media as an ‘evangelical minister’ or ‘Pentecostal preacher’, even though I speak far more often in moderate and liberal churches (and in secular settings) than I do in evangelical, Pentecostal, and Emerging Church venues. Not surprisingly, I’ve been asked on a number of occasions, by both religious liberals and conservatives, “In what sense do you consider yourself a Pentecostal evangelical, and how does that mesh with your being an outspoken religious naturalist?” For 33 years I’ve proudly called myself a Pentecostal, though my political and theological views are by no means right-wing, and for the past two decades I’ve tended to say “evolutionary Pentecostal” or “Pentecostal naturalist” for clarification. My experience in Pentecostal and evangelical contexts has been almost entirely positive—indeed, salvific—and continues to nourish my life and work.