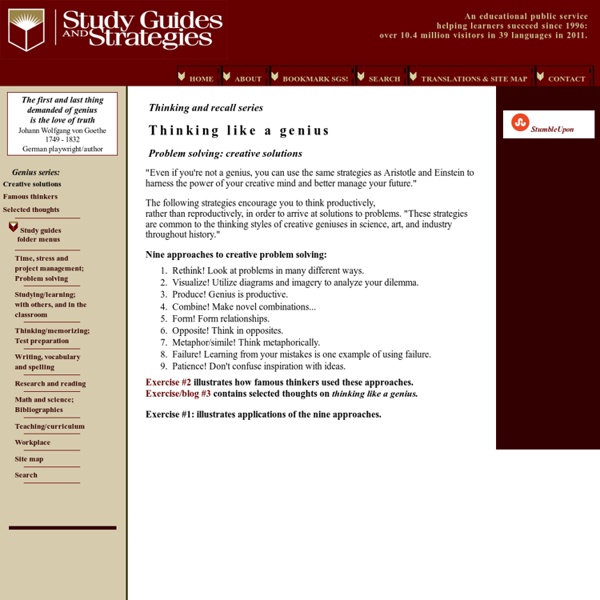 Thinking and recall series Problem solving: creative solutions "Even if you're not a genius, you can use the same strategies as Aristotle and Einstein to harness the power of your creative mind and better manage your future." The following strategies encourage you to think productively, rather than reproductively, in order to arrive at solutions to problems. "These strategies are common to the thinking styles of creative geniuses in science, art, and industry throughout history." Nine approaches to creative problem solving: Rethink! Exercise #2 illustrates how famous thinkers used these approaches. Exercise #1: illustrates applications of the nine approaches. Text of exercise:Nine approaches to creative problem solving: Rethink! Thinking and recall series

When Does Real Learning Happen? – Tanmay Vora Learning, the real learning, happens… When you are intentional about learning When you are driven by an intrinsic need to advance and not only by external triggers and rewards. When you ask more questions to get to the WHY of things (and then to what and how) When you carry an open frame of mind that is receptive When you look for process and patterns even in discrete situations And when you use your understanding to connect the dots and look at a larger picture When you enjoy the process of learning without getting too anxious about the results and goals. Insights, Resources and Visual Notes on Leadership, Learning and Change!

Surprising Sayings We Owe to William Shakespeare As a self-proclaimed loser word nerd, my absolute favorite class in college was Shakespeare. Regardless if the dude even existed or not, I feel intimidated writing about him using my own pathetically limited vocabulary, as I am that enthralled and marveled by his English language skillz (sorry, Will). That's why I was so stoked to see the newest Tumblr hit sweeping the Internet world: "Things We Say Today Which We Owe to Shakespeare."

The Nature Of Genius Genius by L. James Hammond [link to www.ljhammond.com] Radical thinking Are you looking for new ideas? Has your path reached a dead-end?Are your options limited, or just invisible? 7 Not So Obvious Habits To Maximize Your Productivity I was a big fan of productivity, and, in some respects, I still am. I’ve been a very early adopter of GTD, and, for years, I did my weekly reviews with the discipline of a zen monk. But, eventually, I hit a roadblock. GTD is about getting things “done”, but in life we have much more to experience than “doing”. We feel. We dream.

idioms/sayings This is a list of notable idioms in the English language. An idiom is a common word or phrase with a culturally understood meaning that differs from what its composite words' denotations would suggest. For example, an English speaker would understand the phrase "kick the bucket" to mean "to die" – and also to actually kick a bucket. Furthermore, they would understand when each meaning is being used in context. An idiom is not to be confused with other figures of speech such as a metaphor, which invokes an image by use of implicit comparisons (e.g., "the man of steel" ); a simile, which invokes an image by use of explicit comparisons (e.g., "faster than a speeding bullet"); and hyperbole, which exaggerates an image beyond truthfulness (e.g., like "missed by a mile" ). Idioms are also not to be confused with proverbs, which are simple sayings that express a truth based on common sense or practical experience.

Unlocking the Mysteries of The Artistic Mind Consider the flightless fluffs of brown otherwise known as herring gull chicks. Since they're entirely dependent on their mothers for food, they're born with a powerful instinct. Whenever they see a bird beak, they frantically peck at it, begging for their favorite food: a regurgitated meal. But this reflex can be manipulated. Expose the chicks to a fake beak—say, a wooden stick with a red dot that looks like the one on the end of an adult herring gull's beak—and they peck vigorously at that, too. Should the chicks see a wood stick with three red dots, they peck even faster.

Teaching critical thinking Benjamin Bloom (1956) created this taxonomy or classification system for categorizing "competencies" in educational settings, as defined by skills demonstrated by learner type or intelligence. This breakdown provides a useful, incremental framework of complexity in demonstrating mastery of a subject or topic. The verbs include the skills that demonstrate each: The Dalai Lama’s 18 Rules For Living May 6, 2011 | 42 Comments » | Topics: Life, List At the start of the new millennium the Dalai Lama apparently issued eighteen rules for living. Since word travels slowly in the digital age these have only just reached me. Here they are. Take into account that great love and great achievements involve great risk. When you lose, don’t lose the lesson.