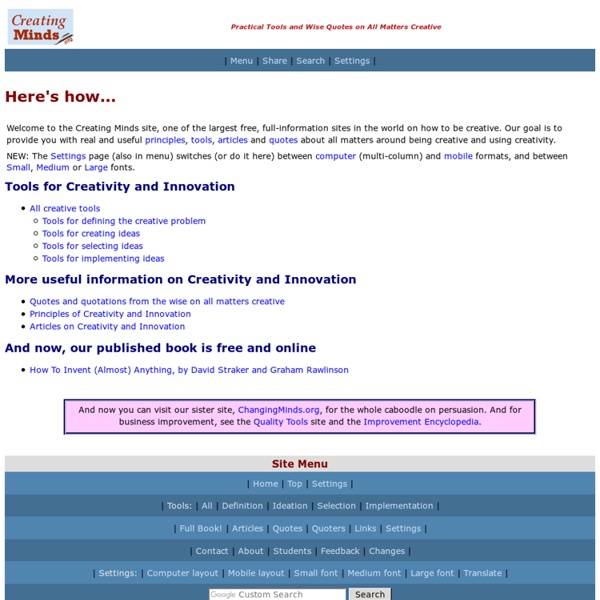 Paul Tozour's Blog - Decision Modeling and Optimization in Game Design, Part 8: Graph Search world is set up. Each map is a complex, interlocking set of rooms, with many parts of the map sealed off by requiring access to different suits, weapons, and power-ups. As the player gains access to new technologies such as "morph ball mode," "spider ball mode," and different suits and weapons, different parts of the map structure gradually unlock, forcing a large amount of re-traversal for the player to visit each new unlocked area. Pearltrees visualization tools add power to search and discovery Nearly four years ago, I spent a week at a multimedia bootcamp at UC Berkeley put on by the Knight Digital Media Center. It was a wonderful experience, not only because of the practical skills I picked up but also because my team was assigned to interview Jeff Heer, then a graduate student studying data visualization. Our finished multimedia package was rough around the edges, but had some great visuals and detail on Heer's quest to help people understand the power of social relationships on the distribution of information.

quotes and quotations from the wise on all matters creative Change happens, that is for sure, and not just in our modern, 21st century era. It seems that the stress of the new affects most people in every age. So the trick is not to resist it, but to go with it. 4 Powerful Game Development Tools September 20th, 2012 When making a game, you want to : Work efficiently and quicklyEasily organize and keep track of your ideasSee your game in action as soon as possibleEasily test if the final product matches to your Game Design In this article, I present 4 powerful game development tools that you can use to achieve the 4 goals stated above.

pearltrees, socializing and curating content on the web Content of any type is not useful unless you can find it, organize it and interact with it. In the enterprise companies have tried many different schemes to try and get business content collected in a central repository, organized, tagged, version controlled, and searchable. This has often taken the route of "content management" systems. Content management systems to varying degrees, do an adequate job of getting some content into a controlled system environment. Category:Creativity Techniques This A to Z of Creativity and Innovation Techniques, provides an introduction to a range of tools and techniques for both idea generation (Creativity) and converting those ideas into reality (Innovation). Like most tools these techniques all have their good and bad points. I like to think of these creativity and innovation techniques as tools in a toolbox in much the same way as my toolbox at home for DIY. It has a saw, spanner, hammer, knife and all sorts of other things in it, they are all very useful, but you have to pick the right tool (creativity / Innovation technique) for each job. This site will try and provide a little guidance along with each tool to let you know whether it's best used for cutting paper or putting in nails.

Features - A Producer's 10 Lessons Learned the Hard Way [Experienced Sony Computer Entertainment Europe producer David Manuel shares the secrets he's learned from years of seeing developers fail to learn from the mistakes they've made on projects in the past, and offers suggestions on the key learnings to integrate into your production process.] Last year, in Brisbane, Australia, where I used to live, there were the worst floods for over 30 years. And yet over the last few centuries there have been several such floods that have hit the city. After each flood, there has been a commission to look at ways to mitigate flooding in the future. And yet most of the recommendations are ignored and building continued on the flood plains.

The 10 Most Important Secrets of Powerful Presenters I am one of those people who loves giving speeches and presentations. From what I have heard, I’m in a minority. Many people dislike giving speeches, but I’ve always had a hard time understanding that. My delight in giving talks is probably tied up with my love of theatre, my desire to be the center of attention (although I am actually an introvert), and my need for approval (and hence applause). People often tell me that I’m a great presenter, or that they loved my talk, or that my talk was the best one at the conference etc etc. so my love for speaking seems to work. But in all honesty, I’m never quite satisfied with the talks I give.