CRACKED: 7 Animals That Are Evolving Right Before Our Eyes 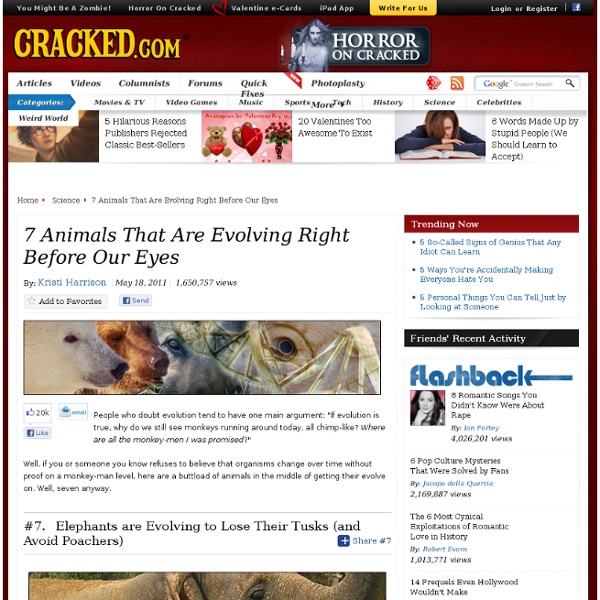 People who doubt evolution tend to have one main argument: "If evolution is true, why do we still see monkeys running around today, all chimp-like? Where are all the monkey-men I was promised?" Well, if you or someone you know refuses to believe that organisms change over time without proof on a monkey-man level, here are a buttload of animals in the middle of getting their evolve on. Elephants are Evolving to Lose Their Tusks (and Avoid Poachers) Here's a joke: What did the elephant say to the poacher? Getty"Stop! Sorry about that. GettyAnd ever since animal rights got involved, unemployment has shot up 300 percent. So elephants have decided to take matters into their own hands ... or trunks or weirdly rounded three-toed feet or whatever. By 2005, it was estimated that the tuskless population had risen to between 5 and 10 percent. GettyJust like your debilitating lisp after reading that out loud Which is incredible, because it's not like tusks are the elephant version of wisdom teeth. Related:  Evolution

Biologists' discovery may force revision of biology textbooks: Novel chromatin particle halfway between DNA and a nucleosome Basic biology textbooks may need a bit of revising now that biologists at UC San Diego have discovered a never-before-noticed component of our basic genetic material. According to the textbooks, chromatin, the natural state of DNA in the cell, is made up of nucleosomes. And nucleosomes are the basic repeating unit of chromatin. When viewed by a high powered microscope, nucleosomes look like beads on a string. But in the Aug. 19 issue of the journal Molecular Cell, UC San Diego biologists report their discovery of a novel chromatin particle halfway between DNA and a nucleosome. While it looks like a nucleosome, they say, it is in fact a distinct particle of its own. "This novel particle was found as a precursor to a nucleosome," said James Kadonaga, a professor of biology at UC San Diego who headed the research team and calls the particle a "pre-nucleosome." These pre-nucleosomes, the researchers say, are converted into nucleosomes by a motor protein that uses the energy molecule ATP.

5 Reasons You Should Be Excited About Mars Today Perhaps the most popular cosmic story of the past decade was that Pluto was no longer a planet. Everyone shared it, and everyone knew about it. However, on a list of the most important scientific discoveries of the past decade, "Pluto is no longer a planet" ranks just under "everything else" and just above nothing. This evening, however, at about 10:30 PST, something pretty incredible will likely occur, and it has nothing to do with the Olympics. #5. Curiosity has been flying toward Mars for almost a year now. The hard part for Curiosity is landing, though. The above video describes the entire complicated process of Curiosity actually landing on the surface of Mars. mars.jpl.nasa.govBum bum buuuuuuuuum! And because it takes so long for a signal to reach Earth from Mars, we won't even know if it worked for 14 minutes. GettyYes, I meant literally. Now, I don't want to belittle the accomplishments of our Olympic athletes. So let us cheer for a robot today. #4. nasa.govRemember me? #3.

Grasshoppers frightened by spiders affect whole ecosystem Hebrew University, Yale researchers show how grasshoppers 'stressed' by spiders affect the productivity of our soil. How do grasshoppers who are being frightened by spiders affect our ecosystem? In no small measure, say researchers at the Hebrew University of Jerusalem and at Yale University in the US. A grasshopper who is in fear of an attacker, such as a spider, will enter a situation of stress and will consume a greater quantity of carbohydrate-rich plants -- similar to humans under stress who might eat more sweets. This type of reaction will, in turn, cause chemical changes in the grasshopper and in its excretions, affecting the ecosystem it inhabits. How does this happen? When the scared grasshopper dies, its carcass, now containing less nitrogen as a result of its diet change, will have an effect on the microbes in the ground, which are responsible for breaking down animals and plants. Research on this biological-ecological phenomenon was carried out by Dr.

X Things that only look trippy under a microscope (ph) Whoa. So deep down, every pina colada is like staring at peacock feathers after dropping, like, all the acid. We're surprised we've never pissed out Joseph's Amazing Technicolor Dreamcoat after overindulging on these. You might think there's some computerized color enhancement at play here, but that's actually a photograph taken by BevShots, which achieved the effect by allowing the drink to dry on a microscope slide, shining some natural light onto it and taking an extreme close-up with a plain old 35 mm camera. Let's look at a few more. Via Bevshots.comFaith and Begorra! What, not artsy enough for you? Via Daily Mail And while that looks like some kind of experimental artwork from the '70s, a margarita ... Via Telegraph ... is channeling Georgia O'Keeffe. We're honestly surprised by how beautiful all of these are. Via Daily MailIt's the only drink that judges you while you sip.

10 Animals You Won't Believe Are Closely Related Thanks to the know-it-all from second grade, we're all aware that dolphins and whales are mammals, not fish. But it's probably been a while since you've pondered just how incredibly, mind-blowingly weird it is that you and whales were the same animal more recently than whales and sharks. Or to put it in chart form, you and whales split up somewhere in the big tangle of bio diversity up top labeled "Age of Mammals" while whales and fish haven't been the same animals since way the hell down ... ... here where you see the word Selacchi. Courtesy of Getty Images." Turns out it's the same reason birds and bats both ended up flying around on wings: convergent evolution, the smarmy term for when completely unrelated species develop similar traits. Image By Glen Fergus What it looks like: You don't need your wife standing next to you screaming, "MOUSE! What it actually is: A tiny little mutant koala Image By Quartl Image By Cody PopeThe worst part? Image By Jagvar Via Wikipedia

Newly Discovered Legless Amphibians Are Horrifying | Caecilian Family Discovered in India | Amphibians & Vertebrates Newly discovered legless amphibians live out their lives in underground burrows, tending their slimy pink young, which emerge from their eggs as miniature adults. If they sound like something out of a monster movie, they look it too: These creatures, part of a group of animals called caecilians, could pass for enormous earthworms. But they're actually vertebrates with backbones, more like salamanders or frogs. The discovery of new vertebrates is rare, especially outside of tropical rain forests, but the new caecilians come mostly from human-inhabited areas in northeastern India. To discover the new family, researchers led by the University of Delhi's S.D. Biju and his colleagues, who report their findings Tuesday (Feb. 21) in the journal Proceedings of the Royal Society B, dubbed the new family Chikilidae. Females of this family build nests for their young underground, laying eggs and coiling around them for the two to three months it takes the embryos to hatch.

5 Scientific Reasons You're Better Off Being Unattractive There is a day in everyone's childhood when they first learn what "natural selection" is, and then there is another day a few years after that when they see it in action, as all of the pretty girls gather around the virile star quarterback and spit on the chubby kids when they walk by. It's easy to spend the rest of your life thinking that your bad luck with the ladies is just evolution trying to filter your weird face and frail physique out of the gene pool. But that's not entirely true; a lot of what keeps the bouncers from letting you into the best clubs also gives you some important advantages. #5. Let's face it: People don't usually consider "short" to be a synonym for "sexy" -- there's a reason Tom Cruise has made a career of hiding the fact that he's only 5'7". hoopistani.blogspot.comManute Bol: Dead. "Hold on, smart guy," you may be thinking, "If this is true, then why do scientists say that we're getting taller on average, as well as living longer?" How are we so sure? #4. #3.

"Evolution is Fact" First plants caused ice ages, new research reveals New research reveals how the arrival of the first plants 470 million years ago triggered a series of ice ages. Led by the Universities of Exeter and Oxford, the study is published in Nature Geoscience. The team set out to identify the effects that the first land plants had on the climate during the Ordovician Period, which ended 444 million years ago. Among the first plants to grow on land were the ancestors of mosses that grow today. The research suggests that the first plants caused the weathering of calcium and magnesium ions from silicate rocks, such as granite, in a process that removed carbon dioxide from the atmosphere, forming new carbonate rocks in the ocean. In addition, by weathering the nutrients phosphorus and iron from rocks, the first plants increased the quantities of both these nutrients going into the oceans, fuelling productivity there and causing organic carbon burial. The team used the modern moss, Physcomitrella patens for their study.