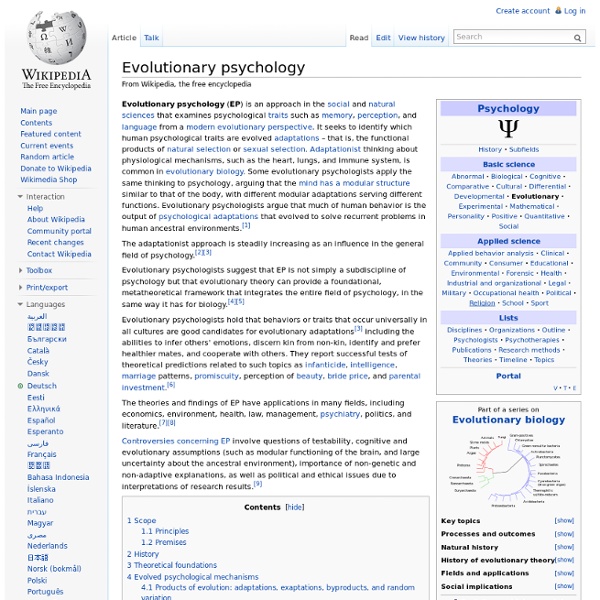 Evolutionary psychology (EP) is an approach in the social and natural sciences that examines psychological traits such as memory, perception, and language from a modern evolutionary perspective. It seeks to identify which human psychological traits are evolved adaptations – that is, the functional products of natural selection or sexual selection. Adaptationist thinking about physiological mechanisms, such as the heart, lungs, and immune system, is common in evolutionary biology. Some evolutionary psychologists apply the same thinking to psychology, arguing that the mind has a modular structure similar to that of the body, with different modular adaptations serving different functions. The adaptationist approach is steadily increasing as an influence in the general field of psychology.[2][3] The theories and findings of EP have applications in many fields, including economics, environment, health, law, management, psychiatry, politics, and literature.[8][9] Scope[edit] Principles[edit]

Pygmalion effect A corollary of the Pygmalion effect is the golem effect, in which low expectations lead to a decrease in performance.[1] The Pygmalion effect and the golem effect are forms of self-fulfilling prophecy. People will take the belief they have of themselves (negative in this case) and attribute traits of the belief with themselves and their work. This will lead them to perform closer to these expectations that they set for themselves. Studies of the Pygmalion effect are difficult to conduct. Rosenthal–Jacobson study[edit] The purpose of the experiment was to support the hypothesis that reality can be influenced by the expectations of others. All students in a single California elementary school were given a disguised IQ test at the beginning of the study. In this experiment, Rosenthal predicted that elementary school teachers may subconsciously behave in ways that facilitate and encourage the students' success. A major limitation of this experiment was its inability to be replicated well.

Faking insanity: Forensic psychologists detect signs of malingering Illustration by Mark Alan Stamaty. When someone commits a horrific, inexplicable crime, we naturally wonder whether he’s mentally ill: Who but a crazy person could do such a thing? But when a killer acts crazy after his arrest, we also might wonder whether he’s preparing for his trial. That’s the speculation around Colorado shooter James Holmes, whose psychiatric treatment and bizarre behavior in court and prison make people wonder whether he’s truly insane or building a case for an insanity defense. It leads to the question: Can a criminal get away with faking insanity? Experts have been debating that question since the creation of the insanity defense in the mid-19th century. Today, less than 1 percent of felony defendants raise an insanity defense, and a tiny fraction of those succeed. The first step is to do a thorough review of the suspect’s history. At some point the examiner leads the discussion to the crime, which sets another trip-wire for deceivers.

Your DNA loves horror movies In The Exorcist, a little girl is possessed by a demon. Although the film takes place in Western culture, even a naked rainforest Indian would be scared by the scenes with the creepy, possessed girl with the yellow cat eyes. Our DNA contains a mechanism that makes us fear rottenness and predators, says Danish researcher. The little girl sits in bed looking like a dissolved corpse. ”Your mother's in here with us, Karras. Suddenly she opens her mouth and a thick squirt of green slime hits the priest’s face. As you may have guessed by now, this is a famous scene from the classic horror movie The Exorcist. It may seem a bit odd that something this horrible and disgusting can achieve the popularity that it has. “They had to train their reactions to stressful situations, and the desire to do so became stored in their DNA – which we still carry today. Evolution taught us to fear zombies He thinks it’s obvious that our fascination with horror is genetic in some way or other. Mathias Clasen

Cavity Waves: Displaced-Water "Pineapple" Wins Fluid Dynamics Competition: Scientific American Gallery When a rock, an Olympic diver or any other object hits the water, an air cavity forms behind it. Fluid dynamicists study the shapes of these cavities and how they change and close over time. When a disk with 20 petals was pulled through a tank of water, it created the cavity shown in this striking set of images. The disk moved at a constant speed of one meter per second. The air cavity pinched off just 200 milliseconds after the disk entered the water, a little before picture (e) in the diagram. In order to study cavities created this way, researchers record video at 10,000 frames per second and analyze it frame by frame. Oscar Enriquez of the Physics of Fluids group at the University of Twente in the Netherlands studied the pineapple-shaped cavity for his master's thesis project. The American Physical Society sponsors the competition at the annual fluid dynamics meeting every November. What is the secret of the group's success? —Evelyn Lamb

Movie Review - Chilling Realities, Beggaring Belief In 'Compliance' hide captionFast-food employee Becky (Dreama Walker) finds herself the victim of a cruel "prank call" scam in Compliance. Magnolia Pictures Compliance Director: Craig Zobel Genre: Drama Running Time: 90 minutes Rated R for language and sexual content/nudity With: Ann Dowd, Dreama Walker, Pat Healy The words "inspired by true events" are the first things to appear on screen in Compliance, Craig Zobel's queasy thriller of discomfort. The facts of the situation as I thought I understood them seemed harrowing enough: As it plays out in the movie, Sandra (Ann Dowd), the manager of an Ohio "Chickwich" fast-food joint, receives a call from a man (Pat Healy) falsely claiming to be a police detective; he accuses a cashier, Becky (Dreama Walker), of stealing money from a customer. That not only Sandra but multiple employees of the store went along with this hoax is jarring enough. hide captionAnn Dowd plays Sandra, manager of an Ohio "Chickwich" franchise.

'Compliance,' A Low Budget Indie, Might Be The Most Disturbing Movie Ever Made NEW YORK -- Halfway through a special screening of "Compliance," the deeply unsettling new film from writer/director Craig Zobel, a woman stood up, yelled out, "Give me a f*cking break," and walked out of the theater. As the film progressed, other women joined her. At least eight by one count, although in the question-and-answer session following the film, someone suggested that actually 10 had left during the screening. "Compliance," shown on Tuesday night at a special screening and panel put together by Psychology Today, is not a Holocaust drama or a gory war film or a Lars Von Trier genital mutilation-fest. It is a psychological thriller grounded in an almost documentary level of reality and will probably hold up as one of the most well-paced, brilliantly acted films of the year. It was also, without a doubt, the most uncomfortable film experience of my life. The film is based on one such event, which occurred at a McDonald's in Mount Washington, Ky., in 2004. Loading Slideshow

ngenital analgesia: The agony of feeling no pain 16 July 2012Last updated at 20:11 ET Steven (right) with his brother Chris in 1983 Steven Pete and his brother were born with the rare genetic disorder congenital analgesia. They grew up - in Washington state, US - with a sense of touch but, as he explains in his own words, without ever feeling pain. It first became apparent to my parents that something was wrong when I was four or five months old. I began chewing on my tongue while teething. At first they put a cigarette lighter underneath my foot and waited for my skin to blister. By which point, I had chewed off about a quarter of my tongue through teething. Continue reading the main story What is congenital analgesia? We grew up on a farm. So during my early childhood I was absent from school a lot due to injury and illness. There was one time, at the roller-skating rink. When I was five or six years old, I was taken away from my home by child protective services. Steven Pete in hospital, aged five I had to go to work the next day.

Lightning & Disease: A Primitive Thought System Overturned For most of human history, life has been a struggle – a struggle against predators, against disease, against natural disasters, and against our fellow human beings as we find ourselves all thrown together on a single planet, vying for limited resources. In the words of the philosopher Thomas Hobbes, life for the many has been “nasty, brutish, and short.” Foremost among our ongoing challenges, however, and rising above all the others, is the struggle against our own ignorance. Like newborn infants, naked and helpless, humans have been thrust into this world without the benefit of any instruction book to show us the way. To the ancients, one of the most terrifying and inexplicable forces that they would encounter on a regular basis came in the form of blinding shafts of energy hurling down from the sky above, killing and setting fires indiscriminately – a phenomenon we now call lightning. The near-universality of this sentiment is striking.