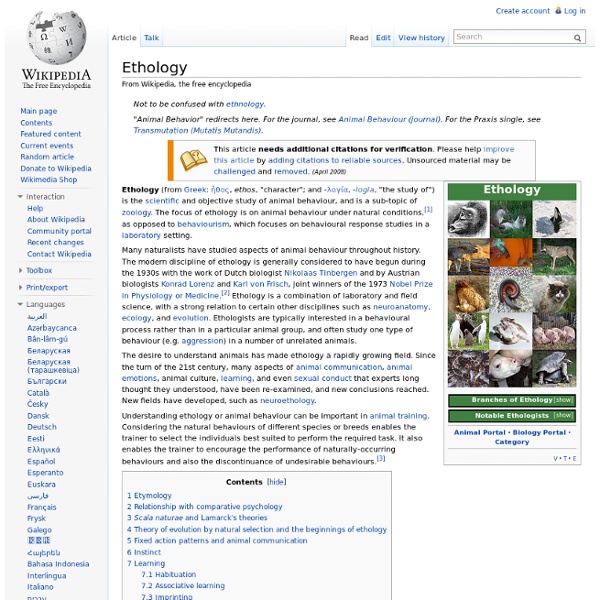 Ethology (from Greek: ἦθος, ethos, "character"; and -λογία, -logia, "the study of") is the scientific and objective study of animal behaviour, and is a sub-topic of zoology. The focus of ethology is on animal behaviour under natural conditions,[1] as opposed to behaviourism, which focuses on behavioural response studies in a laboratory setting. Many naturalists have studied aspects of animal behaviour throughout history. The desire to understand animals has made ethology a rapidly growing field. Understanding ethology or animal behaviour can be important in animal training. Etymology[edit] The term ethology derives from the Greek word èthos (ήθος), meaning character. Relationship with comparative psychology[edit] Scala naturae and Lamarck's theories[edit] See also: Great Chain of Being Until the 19th century, the most common theory among scientists was still the concept of scala naturae, proposed by Aristotle. Theory of evolution by natural selection and the beginnings of ethology[edit] Related:  Societal evolution

Literae Humaniores Literae Humaniores is the name given to an undergraduate course focused on Classics (Ancient Rome, Ancient Greece, Latin, ancient Greek and philosophy) at the University of Oxford and some other universities. The Latin name means literally "more humane literature", and was in contrast to the other main field of study when the university began, i.e. res divinae, aka theology. Lit. Hum. is concerned with human learning, and Lit. Div. with learning that came from God. In its early days, it encompassed mathematics and natural sciences as well. Lit. The University of Oxford's classics course, also known as "Greats", is divided into two parts, lasting five terms and seven terms respectively, the whole lasting four years in total, which is one year more than most arts degrees at Oxford and other English universities. The course of studies leads to a Bachelor of Arts (B.A.) degree. Mods[edit] The Mods course runs for the first five terms of the course. Greats[edit] In 2004 the full Lit.

Isaiah Berlin Sir Isaiah Berlin OM CBE FBA (6 June 1909 – 5 November 1997) was a Russian-British social and political theorist, philosopher and historian of ideas.[1] He was an essayist, conversationalist, raconteur, and lecturer.[1] In its obituary of the scholar, the Independent stated that "Isaiah Berlin was often described, especially in his old age, by means of superlatives: the world's greatest talker, the century's most inspired reader, one of the finest minds of our time [...] there is no doubt that he showed in more than one direction the unexpectedly large possibilities open to us at the top end of the range of human potential".[2] In 1932, at the age of 23, Berlin was elected to a prize fellowship at All Souls College, Oxford. He translated works by Ivan Turgenev from Russian into English and, during the war, worked for the British Diplomatic Service. From 1957 to 1967 he was Chichele Professor of Social and Political Theory at the University of Oxford. Life[edit] Thought[edit] Gerald C.

Two Concepts of Liberty "Positive liberty... is a valid universal goal. I do not know why I should have been held to doubt this, or, for that matter, the further proposition, that democratic self-government is a fundamental human need, something valuable in itself, whether or not it clashes with the claims of negative liberty or of any other goal... What I am mainly concerned to establish is that, whatever may be the common ground between them, and whatever is liable to graver distortion, negative and positive liberty are not the same thing." Isaiah Berlin, Five Essays on Liberty: An Introduction[1] "Two Concepts of Liberty" was the inaugural lecture delivered by the liberal philosopher Isaiah Berlin before the University of Oxford on 31 October 1958. It was subsequently published as a 57-page pamphlet by Oxford at the Clarendon Press. "As for Otanes, he wished neither to rule nor to be ruled—the exact opposite of Aristotle's notion of true civic liberty. ... Summary[edit] Positive liberty[edit] See also[edit]

Romanticism Defining Romanticism[edit] Basic characteristics[edit] Defining the nature of Romanticism may be approached from the starting point of the primary importance of the free expression of the feelings of the artist. The importance the Romantics placed on untrammelled feeling is summed up in the remark of the German painter Caspar David Friedrich that "the artist's feeling is his law".[7] To William Wordsworth poetry should be "the spontaneous overflow of powerful feelings".[8] In order to truly express these feelings, the content of the art must come from the imagination of the artist, with as little interference as possible from "artificial" rules dictating what a work should consist of. Not essential to Romanticism, but so widespread as to be normative, was a strong belief and interest in the importance of nature. However this is particularly in the effect of nature upon the artist when he is surrounded by it, preferably alone. The term[edit] The period[edit] Romantic literature[edit]

Ancien Régime This article is about the administrative, judicial, and ecclesiastic structures of the Kingdom of France in the pre-revolutionary period. For a general history of France in this period, see Early modern France. For the political history of France in this period, see Kingdom of France. Much of the medieval political centralization of France had been lost in the Hundred Years' War, and the Valois Dynasty's attempts at re-establishing control over the scattered political centres of the country were hindered by the Wars of Religion. The need for centralization in this period was directly linked to the question of royal finances and the ability to wage war. One key to this centralization was the replacing of personal "clientele" systems organized around the king and other nobles by institutional systems around the state.[1] The creation of the Intendants—representatives of royal power in the provinces—did much to undermine local control by regional nobles. Terminology[edit] France in 1477.

Johann Friedrich Struensee Count Johann Friedrich Struensee (5 August 1737 – 28 April 1772) was a German doctor. He became royal physician to the mentally ill King Christian VII of Denmark and a minister in the Danish government. He rose in power to a position of "de facto" regent of the country, where he tried to carry out widespread reforms. His affair with Queen Caroline Matilda ("Caroline Mathilde") caused scandal, especially after the birth of a daughter, Princess Louise Augusta, and was the catalyst for the intrigues and power play that caused his downfall and dramatic death. Upbringing and early career[edit] Johann Friedrich entered the University of Halle on 5 August 1752 at the age of fifteen where he studied Medicine, and graduated as a Doctor in Medicine ("Dr. His parents moved to Rendsburg in 1760 where Adam Struensee became first superintendent (comparable to bishop) for the duchy, and subsequently superintendent-general of Schleswig-Holstein. Portrait of Struensee, 1770 Rise to power[edit] H.

Enevold Brandt Count Enevold Brandt (1738 - 28 April 1772) was a Danish courtier. Notes[edit] References[edit] "Brandt, Enevold, Count". Value pluralism Value-pluralism is a theory in metaethics, rather than a theory of normative ethics, or a set of values in itself. Oxford philosopher and historian of ideas Isaiah Berlin is credited with being the first to popularize a substantial work describing the theory of objective value-pluralism, bringing it to the attention of academia (cf. the Isaiah Berlin Virtual Library). The related idea that fundamental values can and, in some cases, do conflict with each other is prominent in the thought of Max Weber, captured in his notion of "polytheism". Context[edit] Value-pluralism is an alternative to both moral relativism and moral absolutism (which Berlin called monism).[1] An example of value-pluralism is the idea that the moral life of a nun is incompatible with that of a mother, yet there is no purely rational measure of which is preferable. Value-pluralism differs from value-relativism in that pluralism accepts limits to differences, such as when vital human needs are violated.[2]

Bernard Williams English moral philosopher Sir Bernard Arthur Owen Williams, FBA (21 September 1929 – 10 June 2003) was an English moral philosopher. His publications include Problems of the Self (1973), Ethics and the Limits of Philosophy (1985), Shame and Necessity (1993), and Truth and Truthfulness (2002). He was knighted in 1999. As Knightbridge Professor of Philosophy at the University of Cambridge and Deutsch Professor of Philosophy at the University of California, Berkeley, Williams became known for his efforts to reorient the study of moral philosophy to psychology, history, and in particular to the Greeks.[1][2] Described by Colin McGinn as an "analytical philosopher with the soul of a general humanist," he was sceptical about attempts to create a foundation for moral philosophy. Williams was a strong supporter of women in academia; according to Nussbaum, he was "as close to being a feminist as a powerful man of his generation could be Life[edit] Early life and education[edit] Opera[edit] Books