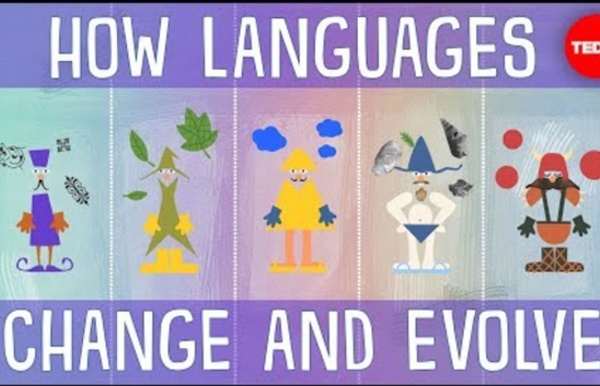 History of English The figure below shows the timeline of the history of the English language. The earliest known residents of the British Isles were the Celts, who spoke Celtic languages—a separate branch of the Indo-European language family tree. Over the centuries the British Isles were invaded and conquered by various peoples, who brought their languages and customs with them as they settled in their new lives. Language Timeline The English language is a vast flea market of words, handed down, borrowed or created over more than 2000 years. And it is still expanding, changing and trading. Our language is not purely English at all - it is a ragbag of diverse words that have come to our island from all around the world. Words enter the language in all sorts of ways: with invaders, migrants, tradesmen; in stories, artworks, technologies and scientific concepts; with those who hold power, and those who try to overthrow the powerful. View the chart below to get an overview of some of the many chapters in the history of the English language.

Etymology: Languages that have contributed to English vocabulary over time. In Borrowed Words: A History of Loanwords in English, I examine how words borrowed from different languages have influenced English throughout its history. The above feature summarizes some of the main data from the book, focusing on the 14 sources that have given the most words to English, as reflected by the new and revised entries in the Oxford English Dictionary. Using the date buttons at the top of the graphic, you can compare the impact that different languages have made on English over time. In the "per period" view, you can see the proportions of words coming into English from each source in 50-year slices from 1150 up to the present day. Compare, for instance, how the input from German has grown and then declined again from 1800 to the present day. (The earliest period, pre-1150, is much longer than 50 years, because more precise dating of words from this early stage in the history of English is very problematic.)

Do you speak Uglish? How English has evolved in Uganda Please don’t dirten my shirt with your muddy hands. Stop cowardising and go and see that girl. Don’t just beep her again, bench her. Typos? No, we’re speaking Uglish (pronounced you-glish), a Ugandan form of English influenced by Luganda and other local dialects, which has produced hundreds of words with their own unique meanings. 25 maps that explain the English language English is the language of Shakespeare and the language of Chaucer. It’s spoken in dozens of countries around the world, from the United States to a tiny island named Tristan da Cunha. It reflects the influences of centuries of international exchange, including conquest and colonization, from the Vikings through the 21st century.

New York City's French Dual-Language Programs Are Mostly Pointless A somewhat surprising piece in The New York Times this week reported that the French dual-language program in New York's public school system "is booming," the third-largest such program in the city, after Spanish and Chinese. That commitment is a beautiful thing—for children of Francophone immigrants. But for we natives, the idea that kids need to pick up French is now antique. Make no mistake: For immigrant kids from anywhere, bilingual education is invaluable. But the idea that American-born children need to learn French has become more reflex than action, like classical music played at the wedding of people who live to modern pop. The Evolution of English The Evolution of English George Boeree The English language begins with the Anglo-Saxons. The Romans, who had controlled England for centuries, had withdrawn their troops and most of their colonists by the early 400s. Attacks from the Irish, the Picts from Scotland, the native Britons, and Anglo-Saxons from across the North Sea, plus the deteriorating situation in the rest of the Empire, made the retreat a strategic necessity. As the Romans withdrew, the Britons re-established themselves in the western parts of England, and the Anglo-Saxons invaded and began to settle the eastern parts in the middle 400s. The Britons are the ancestors of the modern day Welsh, as well as the people of Britanny across the English channel.

List of English words of French origin The percentage of modern English words derived from each language group are as follows:French: ~29% Latin (including words used only in scientific / medical / legal contexts): ~29% Germanic: ~26% Others: ~17% A great number of words of French origin have entered the English language to the extent that many Latin words have come to the English language. According to different sources, 45% of all English words have a French origin.[1] This fact suggests that 80,000 words should appear in this list; this list, however, only includes words imported directly from French, such as both joy and joyous, and does not include derivatives formed in English of words borrowed from French, including joyful, joyfulness, partisanship, and parenthood. Although French is mainly from Latin (which accounts for about 60% of English vocabulary either directly or via a Romance language), it also includes words from Gaulish and Germanic languages (especially Old Frankish). Daily use[edit]

The History of English - How New Words Are Created The drift of word meanings over time often arises, often but not always due to catachresis (the misuse, either deliberate or accidental, of words). By some estimates, over half of all words adopted into English from Latin have changed their meaning in some way over time, often drastically. For example, smart originally meant sharp, cutting or painful; handsome merely meant easily-handled (and was generally derogatory); bully originally meant darling or sweetheart; sad meant full, satiated or satisfied; and insult meant to boast, brag or triumph in an insolent way. A more modern example is the changing meaning of gay from merry to homosexual (and, in some circles in more recent years, to stupid or bad). Some words have changed their meanings many times. Some words have become much more specific than their original meanings.