The Nature of Consciousness: How the Internet Could Learn to Feel - Steve Paulson 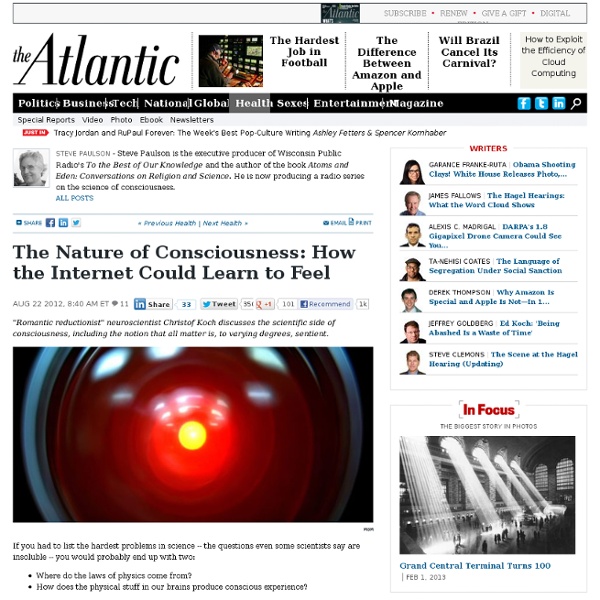 "Romantic reductionist" neuroscientist Christof Koch discusses the scientific side of consciousness, including the notion that all matter is, to varying degrees, sentient. If you had to list the hardest problems in science -- the questions even some scientists say are insoluble -- you would probably end up with two: Where do the laws of physics come from? How does the physical stuff in our brains produce conscious experience? Even though philosophers have obsessed over the "mind-body problem" for centuries, the mystery of consciousness wasn't considered a proper scientific question until two or three decades ago. Then, a couple of things happened. By the 1980s, Crick had jumped from molecular biology to neuroscience and moved from England to California. Koch remains on the front lines of neurobiology. Why have you devoted so much of your life searching for the neural roots of consciousness? Koch: Consciousness is the central factor of our lives. You actually see a world. Koch: Correct.

A Brief Guide to Embodied Cognition: Why You Are Not Your Brain Embodied cognition, the idea that the mind is not only connected to the body but that the body influences the mind, is one of the more counter-intuitive ideas in cognitive science. In sharp contrast is dualism, a theory of mind famously put forth by Rene Descartes in the 17th century when he claimed that “there is a great difference between mind and body, inasmuch as body is by nature always divisible, and the mind is entirely indivisible... the mind or soul of man is entirely different from the body.” In the proceeding centuries, the notion of the disembodied mind flourished. From it, western thought developed two basic ideas: reason is disembodied because the mind is disembodied and reason is transcendent and universal. However, as George Lakoff and Rafeal Núñez explain: Cognitive science calls this entire philosophical worldview into serious question on empirical grounds...

Consciousness Representation of consciousness from the seventeenth century At one time consciousness was viewed with skepticism by many scientists, but in recent years it has become a significant topic of research in psychology, neuropsychology and neuroscience. The primary focus is on understanding what it means biologically and psychologically for information to be present in consciousness—that is, on determining the neural and psychological correlates of consciousness. The majority of experimental studies assess consciousness by asking human subjects for a verbal report of their experiences (e.g., "tell me if you notice anything when I do this"). Table of contents (With last update date) Cover Foreword (August 13, 2009) Part 1. Quantum theory and consciousness Preface to part 1 (April 12, 2000)

How to Cultivate Collective Intelligence The first time I heard the word "swarming" in a business context, it made me chuckle. I had an instant visual of bees dressed in suits and carrying briefcases, furiously buzzing over, under, and around a conference table. They weren’t accomplishing anything—just making a lot of noise and looking for something to sting. Then it occurred to me that all worker bees are female. Each bee in my mental image was now wearing a suit with a skirt, and red high heels on all six feet. By this point I was ready to give up on the idea of swarming in business altogether.

Wicked Problems: Problems Worth Solving - My Epiphany I became interested in the power of design in social contexts during a project at my former employer, frog design. Project Masiluleke (or Project M) was organized by Pop!Tech, frog, and MTN, an African mobile phone operator. Project M was designed to help stop the spread of AIDS in KwaZulu-Natal, a South African province with about 10 million people, including an estimated four million who are HIV-positive and 400,000 who will develop AIDS each year.Dugger, Celia. "South Africa Is Seen to Lag in H.I.V.

Integral theory consciousness Ken Wilber Journal of Consciousness Studies, 4 (1), February 1997, pp. 71-92 Copyright, 1997, Imprint Academic Abstract: An extensive data search among various types of developmental and evolutionary sequences yielded a `four quadrant' model of consciousness and its development (the four quadrants being intentional, behavioural, cultural, and social). Each of these dimensions was found to unfold in a sequence of at least a dozen major stages or levels. Combining the four quadrants with the dozen or so major levels in each quadrant yields an integral theory of consciousness that is quite comprehensive in its nature and scope. This model is used to indicate how a general synthesis and integration of twelve of the most influential schools of consciousness studies can be effected, and to highlight some of the most significant areas of future research.

Higher consciousness Higher consciousness is the consciousness of a higher Self, transcendental reality, or God. It is "the part of the human being that is capable of transcending animal instincts". The concept developed in German Idealism, and is a central notion in contemporary popular spirituality. Philosophy[edit] Wicked Problems Wicked Problems A wicked problem is one for which each attempt to create a solution changes the understanding of the problem. Wicked problems cannot be solved in a traditional linear fashion, because the problem definition evolves as new possible solutions are considered and/or implemented. The term was originally coined by Horst Rittel. Wicked problems always occur in a social context -- the wickedness of the problem reflects the diversity among the stakeholders in the problem.

Philosophy of mind A phrenological mapping[1] of the brain – phrenology was among the first attempts to correlate mental functions with specific parts of the brain Philosophy of mind is a branch of philosophy that studies the nature of the mind, mental events, mental functions, mental properties, consciousness, and their relationship to the physical body, particularly the brain. The mind–body problem, i.e. the relationship of the mind to the body, is commonly seen as one key issue in philosophy of mind, although there are other issues concerning the nature of the mind that do not involve its relation to the physical body, such as how consciousness is possible and the nature of particular mental states.[2][3][4] Mind–body problem[edit]

Wicked Problems If you work in an organisation that deals with social, commercial or financial planning - or any type of public policy planning - then you've got wicked problems. You may not call them by this name, but you know what they are. They are those complex, ever changing societal and organisational planning problems that you haven't been able to treat with much success, because they won't keep still. They're messy, devious, and they fight back when you try to deal with them.