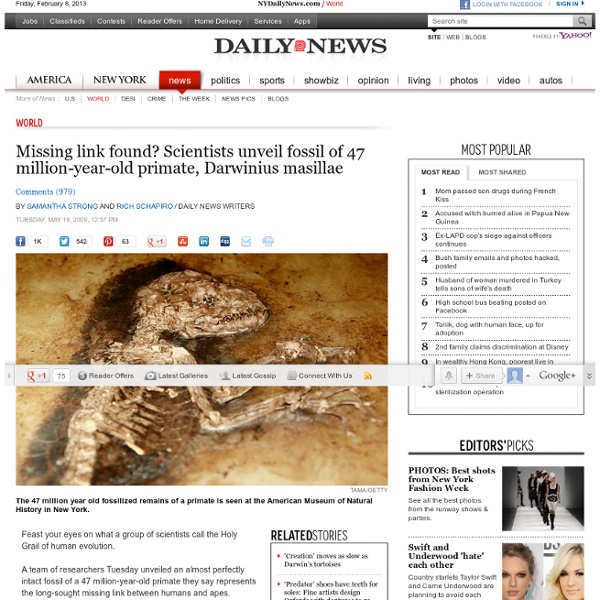 Tama/Getty The 47 million year old fossilized remains of a primate is seen at the American Museum of Natural History in New York. Feast your eyes on what a group of scientists call the Holy Grail of human evolution. A team of researchers Tuesday unveiled an almost perfectly intact fossil of a 47 million-year-old primate they say represents the long-sought missing link between humans and apes. Officially known as Darwinius masillae, the fossil of the lemur-like creature dubbed Ida shows it had opposable thumbs like humans and fingernails instead of claws. Scientists say the cat-sized animal's hind legs offer evidence of evolutionary changes that led to primates standing upright - a breakthrough that could finally confirm Charles Darwin's theory of evolution. "This specimen is like finding the Lost Ark for archeologists," lead scientist Jorn Hurum said at a ceremony at the American Museum of Natural History. "It is the scientific equivalent of the Holy Grail. rschapiro@nydailynews.com

Top 10 Myths About Evolution – with Downloadable PDF | Atheism Resource Email If you have been looking for a simple, easy to follow quick guide to evolution… we’ve got it. Our friends at the Skeptics Society gave us permission to reprint this. Below is the text. Original Text: 1 If Humans Came From Apes, Why Aren’t Apes Evolving Into Humans? Humans, apes, and monkeys are only distant evolutionary “cousins.” 2 There Are Too Many Gaps in the Fossil Record for Evolution to Be True In fact, there are lots of intermediate fossils. 3 If Evolution Happened Gradually Over Millions of Years Why Doesn’t the Fossil Record Show Gradual Change? Sudden changes in the fossil record are not missing evidence of gradualism; they are extant evidence of punctuation. 4 No One Has Ever Seen Evolution Happen Evolution is a historical science confirmed by the fact that so many independent lines of evidence converge to this single conclusion. 5 Science Claims That Evolution Happens by Random Chance Natural selection is not “random” nor does it operate by “chance.”

Scientist: Evolution debate will soon be history NEW YORK (AP) — Richard Leakey predicts skepticism over evolution will soon be history. Not that the avowed atheist has any doubts himself. Sometime in the next 15 to 30 years, the Kenyan-born paleoanthropologist expects scientific discoveries will have accelerated to the point that "even the skeptics can accept it." "If you get to the stage where you can persuade people on the evidence, that it's solid, that we are all African, that color is superficial, that stages of development of culture are all interactive," Leakey says, "then I think we have a chance of a world that will respond better to global challenges." Leakey, a professor at Stony Brook University on Long Island, recently spent several weeks in New York promoting the Turkana Basin Institute in Kenya. The institute, where Leakey spends most of his time, welcomes researchers and scientists from around the world dedicated to unearthing the origins of mankind in an area rich with fossils. View gallery

Birds got smart by becoming big babes - life - 28 May 2012 Out of the skulls of babes. Modern birds have skulls that look remarkably like those of juvenile dinosaurs, offering an unusual explanation for how birds came to have relatively large brains. As dinosaurs evolved into birds, something arrested their development. The juvenile heads they kept may be responsible for their relatively high intelligence, and their incredible evolutionary success. Birds are living dinosaurs, having evolved from feathered dinosaurs similar to the Velociraptor. They were the only dinosaurs to survive the mass extinction that took place 65 million years ago. Bhart-Anjan Bhullar of Harvard University and colleagues took photos and CT scans of skulls belonging to juvenile and adult dinosaurs, extinct and modern birds, and more distant relatives like crocodiles. They found that compared to their ancestors, birds' faces became flattened, and their brain cases relatively larger. Like bird like human Journal reference: Nature, DOI: 10.1038/nature11146 More from the web

physicscentral Aerographite Is the World's Lightest Material, Is a Total Airhead and Kind of Weird The last time we looked at ultra-lightweight materials, we were thoroughly impressed by a spongy, metallic micro-lattice that held a density of 0.9 milligrams per cubic centimeter (mg/cc). Now, a team of German scientists from the Technical University of Hamburg and University of Kiel has developed a new carbon-nanotube-based material called Aerographite that’s four times lighter at 0.2mg/cc. As you might have surmised from Aerographite’s name, it’s a material made of mostly air--99.99 percent, to be exact--along with carbon nanotubes. Despite Aerographite’s lightweight nature, it’s actually quite tough. Because Aerographite is electrically conductive and chemical-resistant, the scientists believe that the material could be used in ultra-lightweight batteries or supercapacitors. So...invisibility cloaks, anyone? [Advanced Materials and Technical University of Hamburg via Eureka] Like this?

Introduction to Evolutionary Biology Introduction to Evolutionary Biology Version 2 Copyright © 1996-1997 by Chris Colby[Last Update: January 7, 1996] volution is the cornerstone of modern biology. It unites all the fields of biology under one theoretical umbrella. It is not a difficult concept, but very few people -- the majority of biologists included -- have a satisfactory grasp of it. Misunderstandings about evolution are damaging to the study of evolution and biology as a whole. This is a brief introduction to evolutionary biology. What is Evolution? Evolution is a change in the gene pool of a population over time. The English moth, Biston betularia, is a frequently cited example of observed evolution. The increase in relative abundance of the dark type was due to natural selection. Populations evolve. Evolution can be divided into microevolution and macroevolution. The word evolution has a variety of meanings. Common Misconceptions about Evolution Evolution is not progress. Genetic Variation Natural Selection

Dispatches from the birth of the Universe: sometimes science gets lucky For the generations that grew up with TV before the age of cable, the box in our living room was a time machine, capable of taking us back to just a few hundred thousand years after the birth of the Universe. We just didn't realize it. Nor did the scientists that discovered this, at least at first. But luck seemed to play a large role in one of the biggest discoveries of our lifetime. That may not have been the intended message of the discussion called "Dispatches from the Birth of the Universe," hosted by the World Science Festival on Friday. The panel provided a good picture of our current state of knowledge on the birth of the Universe, and a glimpse at what we'll likely find out next. Lawrence Krauss, who moderated the panel, introduced it by turning on an old TV set on stage. But, even after the birth of television, nobody realized what it was. But the background they detected from Earth was smooth, while we know the Universe is lumpy, filled with complex structures. And Mather?

In The Beginning Was the Mudskipper? | The Loom In 1893, the Norwegian zoologist Fridtjof Nansen set off to find the North Pole. He would not use pack dogs to cross the Arctic Ice. Instead, he locked his fate into the ice itself. He sailed his ship The Fram directly into the congealing autumn Arctic, until it became locked in the frozen sea. For two and a half years they drifted with the pack. The Fram meanwhile continued to drift east. Its pilot was a young Swedish engineer named Salamon Andrée. When he got back to Sweden, Andrée discovered that Nansen had actually failed and had returned to Norway. For a week the crew huddled in cramped fog. But in 1897, no one knew where Andrée had gone. They weren’t the bones of Andrée and his crew. Other fossils of these fish had been found elsewhere in late Devonian rocks, but to those who studied that era, Greenland was a revelation. These expeditions were a bit less brutal than Andrée’s and Nansen’s trips. Ichthyostega’s tail was a similar mix of tetrapod and fish. The whole body:

Scientist creates lifelike cells out of metal Scientists trying to create artificial life generally work under the assumption that life must be carbon-based, but what if a living thing could be made from another element? One British researcher may have proven that theory, potentially rewriting the book of life. Lee Cronin of the University of Glasgow has created lifelike cells from metal — a feat few believed feasible. The discovery opens the door to the possibility that there may be life forms in the universe not based on carbon, reports New Scientist. Even more remarkable, Cronin has hinted that the metal-based cells may be replicating themselves and evolving. "I am 100 percent positive that we can get evolution to work outside organic biology," he said. The high-functioning "cells" that Cronin has built are constructed from large polyoxometalates derived from a range of metal atoms, like tungsten. The metallic bubbles are certainly cell-like, but are they actually alive? The early results have been encouraging.

Evolutionary origins of the nervous system - Neurophilosophy THE human brain is a true marvel of nature. This jelly-like 1.5kg mass inside our skulls, containing hundreds of billions of cells which between them form something like a quadrillion connections, is responsible for our every action, emotion and thought. How did this remarkable and extraordinarily complex structure evolve? This question poses a huge challenge to researchers; brain evolution surely involved thousands of discrete, incremental steps, which occurred in the mists of deep time across hundreds of millions of years, and which we are unlikely to ever fully understand. Nevertheless, a number of studies published in recent years have begun to shed some light on the evolutionary origins of the nervous system, and provide clues to some of the earliest stages in the evolution of the human brain. The simplest nervous systems lack a brain, and instead consist of diffuse networks of nerves. “Such a complex arrangement could not have been invented twice throughout evolution. Related: