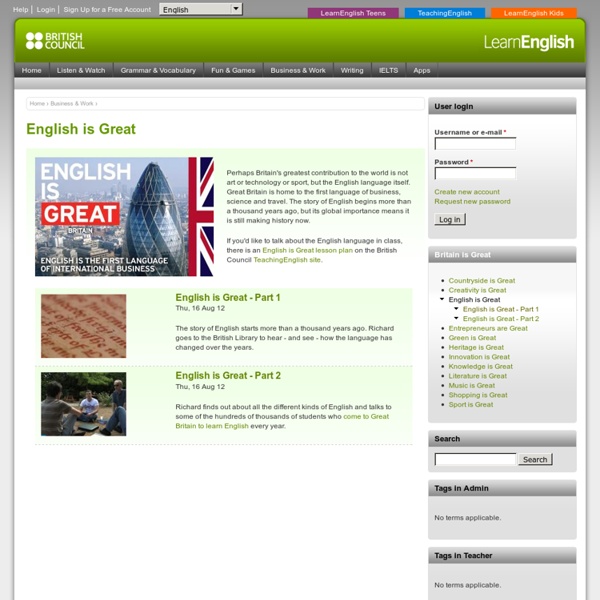 English Timeline This interactive timeline allows you to explore the evolution of English language and literature, from the 11th century to the present day. Scroll through decade by decade to investigate the richness and diversity of our poetry and prose, as well as the many social, cultural and political strands from which our language has been woven. The timeline includes a fascinating combination of texts: Anglo Saxon tales and medieval illuminations; iconic literary manuscripts and printed texts; as well as letters, newspapers, handbills, posters, charters, speeches and campaign leaflets. Launch the interactive Flash timeline above, or explore the collections within each of the centuries below. Beowulf, Anglo Saxon monsters & more...

The world’s languages, in 7 maps and charts These seven maps and charts, visualized by The Washington Post, will help you understand how diverse other parts of the world are in terms of languages. 1. Some continents have more languages than others Not all continents are equally diverse in the number of spoken languages. Whereas Asia leads the statistics with 2,301 languages, Africa follows closely with 2,138. There are about 1,300 languages in the Pacific, and 1,064 in South and North America. 2. Chinese has more native speakers than any other language, followed by Hindi and Urdu, which have the same linguistic origins in northern India. The numbers are fascinating because they reflect the fact that two-thirds of the world's population share only 12 native languages. His numbers are surprising, compared with the ones featured in the CIA's Factbook. The number for Portuguese is smaller than other sources suggest because not all Brazilians are native speakers. 3. 4. 5. 6. 7. Some language skills could be more rewarding than others.

Top 10 Family Days Out 8. Wrest Park, Bedfordshire Clearly one of Wrest Park's most appealing attributes is the sheer amount of space it affords families to run around, explore, discover and just simply have a bit of fun in. With over 90 acres of historic landscape surrounding the mansion, children could spend days here and never get bored! "Down every path there is another amazing building, statue or water feature to discover. My three boys love it here whatever the weather!" "Acres of space, acres of fun and imagination to be had with some good history thrown in for good measure!" Visit Wrest Park 9. This magnificent 12th century fortress has a long and colourful history - just one of the many attributes that makes this a top family destination. "Fab day out for all the family. "It's a castle, good and proper. "The best historic site for children because it is well preserved and they can explore the ramparts and get a real sense of life as it was." Visit Framlingham Castle 10. Visit Audley End

Word on the street | LearnEnglish | British Council | Oxford University Transcript Oxford should be about an hour's drive from London. It’s very popular with tourists and students. And Oxford University is one of the top ten universities in the world. I’m at the top of the Carfax Tower. Oxford University is made up of thirty eight different colleges. Many students get involved in activities outside their studies. Nick: How important are the extracurricular activities like the sporting clubs and societies? Student: I think it’s really important. Nick: Is it difficult to get the balance right between your university work and your sport? Student: Well, I tend to be busy all of the time. There are universities in most big towns and cities in Britain. Many students come from abroad to study in the UK. Waqas Adenwala is from Pakistan and lives in Rosebury Hall, the university halls of residence about 2 kilometres from the main campus. Nick: Hi, Waqas. Waqas: Hi Nick. Nick: Nice room. Waqas: Thank you. Nick: So why do you live in a Halls of Residence? Waqas: It’s great.

World’s Languages Dying Off Rapidly Of the estimated 7,000 languages spoken in the world today, linguists say, nearly half are in danger of extinction and are likely to disappear in this century. In fact, they are now falling out of use at a rate of about one every two weeks. Some endangered languages vanish in an instant, at the death of the sole surviving speaker. Others are lost gradually in bilingual cultures, as indigenous tongues are overwhelmed by the dominant language at school, in the marketplace and on television. New research, reported today, has identified the five regions of the world where languages are disappearing most rapidly. The study was based on field research and data analysis supported by the National Geographic Society and the Living Tongues Institute for Endangered Languages, an organization for the documentation, revitalization and maintenance of languages at risk. At a teleconference with reporters today, K. Dr. Another measure of the threatened decline of many relatively obscure languages, Dr.

U.S. History: Free streaming history videos and activities Since 2009, resources available on HaveFunWithHistory have been the focus of many classroom assignments, as well as a means of supplementing, and enhancing classroom curriculum. How to use these resources: Link to an individual HFwH video, or Subject to support your current curriculum, Create an assignment around a video or activity (ex: Boston Tea Party), or Use resources as part of a Webquest, or other online assignment. Each video or activity includes a brief description, links to related subjects, as well as suggestions for living-history field trips. Learning about our history is more than collecting names, facts and dates. The videos on this site deserve the same amount of scrutiny that any other history resource demands. So enjoy the videos, and Have Fun with History!

(2) 14 Wacky Things About Indian Culture Teacher's powerful slavery lesson for Black History Month goes viral A sixth-grade teacher took Black History Month to the next level with a door-size letter to her students about slavery. Math teacher Jovan Bradshaw of Magnolia Middle School in Moss Point, Miss., covered her classroom door with bright yellow paper and a message (which she attributed to poet and author the Rev. Nadine Drayton-Keen): “Dear Students, they didn’t steal slaves. The teacher’s Facebook photo went viral, with 14K reactions and 103K shares. “It all started with this little boy in my class,” Bradshaw told WLOX. Bradshaw, 40, also told WLOX, “So many of our African-American students don’t know where they come from. The teacher of nine years tells Yahoo Lifestyle that she planned to cover her door with a picture of a black woman with natural hair, until the conversation with her student. As a math teacher, Bradshaw tries to make history relevant.

If It Were My Home The lottery of birth is responsible for much of who we are. If you were not born in the country you were, what would your life be like? Would you be the same person? IfItWereMyHome.com is your gateway to understanding life outside your home. Use our country comparison tool to compare living conditions in your own country to those of another. You can also use our visualization tool to help understand the impact of a disaster. If you're not sure where to begin, try this week's featured country, Dominica

The World Factbook - Central Intelligence Agency People from nearly every country share information with CIA, and new individuals contact us daily. If you have information you think might interest CIA due to our foreign intelligence collection mission, there are many ways to reach us. If you know of an imminent threat to a location inside the U.S., immediately contact your local law enforcement or FBI Field Office. For threats outside the U.S., contact CIA or go to a U.S. Embassy or Consulate and ask for the information to be passed to a U.S. official. Please know, CIA does not engage in law enforcement. In addition to the options below, individuals contact CIA in a variety of creative ways. If you feel it is safe, consider providing these details with your submission: Your full name Biographic details, such as a photograph of yourself, and a copy of the biographic page of your passport How you got the information you want to share with CIA How to contact you, including your home address and phone number