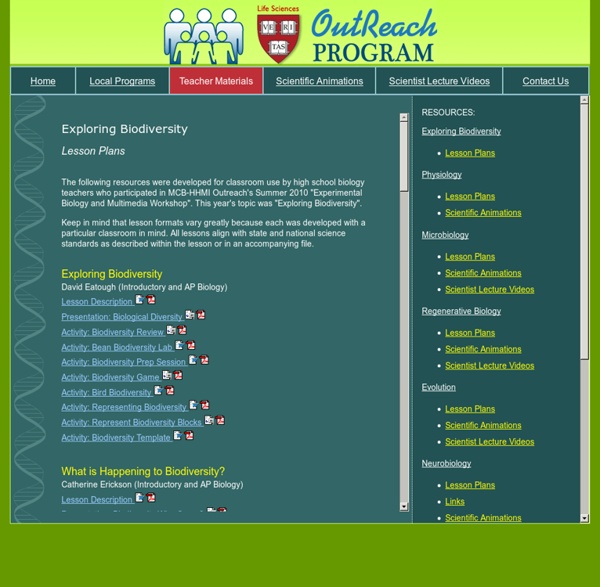 Developing Independent Learners – The 7 Monkeys! The 15 minute forum tonight was led by our two science NQTs – Faye Hedley (@f_hedley) and Becky Owen. They shared a strategy they have been using called ‘The 7 Monkeys’. The 7 Monkeys is a way of enabling students to learn a concept, process or idea independently with minimal teacher input.

Lesson: Nat. of Sci. mini-lesson: Checks Lab Before Doing this lab, consider doing the NEW High-Tech Version: The E-Mail Lab. (Details below under EXTENSIONS AND VARIATIONS. TEACHER PREPARATIONS: 1. Because this lesson provides an excellent opportunity to understand important elements of the Nature of Science , be sure to read our General Background Information, with our Rationale and our Approach, and tips for Presenting the lessons for maximum effect and Dispelling some of the popular myths about science. 2. In any of the discussions expected with the class, select a few key items (important concepts) that lend themselves to interpretation, and introduce class to the Think-Pair-Share (TPS) routine dealing with those items.

Digital Differentiation Technology is a tool that can be used to help teachers facilitate learning experiences that address the diverse learning needs of all students and help them develop 21st Century Skills. At it's most basic level, digital tools can be used to help students find, understand and use information. When combined with student-driven learning experiences fueled by Essential Questions offering flexible learning paths, it can be the ticket to success. Here is a closer look at three components of effectively using technology as a tool for digital differentiation. Note: The interactive graphics you see below have been updated.

Ten Takeaway Tips for Teaching Critical Thinking Suggestions from educators at KIPP King Collegiate High School on how to help develop and assess critical-thinking skills in your students. Ideally, teaching kids how to think critically becomes an integral part of your approach, no matter what subject you teach. But if you're just getting started, here are some concrete ways you can begin leveraging your students' critical-thinking skills in the classroom and beyond.

Teaching the Gifted and Talented: 33 Websites Where You Can Find Good Resources I wish the Internet was available to me as a kid in elementary school. In New York City, where I attended kindergarten through sixth grade, they called the gifted and talented class "SP". I remember being put into a class to learn French, but very little else. I figured out how ahead I was only when I entered junior high school in New Jersey. The French language I had studied for three years allowed me to coast through French class for the next four years. Without anymore "SP" or "G and T" classes, I unfortunately developed a lazy attitude and eventually quit taking French in eleventh grade.

More Beta Cells, More Insulin, Less Diabetes Caption: Betatrophin, a natural hormone produced in liver and fat cells, triggers the insulin-producing beta cells in the pancreas to replicateCredit: Douglas Melton and Peng Yi Type 2 diabetes (T2D) has arguably reached epidemic levels in this country; between 22 and 24 million people suffer from the disease. But now there’s an exciting new development: scientists at the Harvard Stem Cell Institute have discovered a hormone that might slow or stop the progression of diabetes [1].