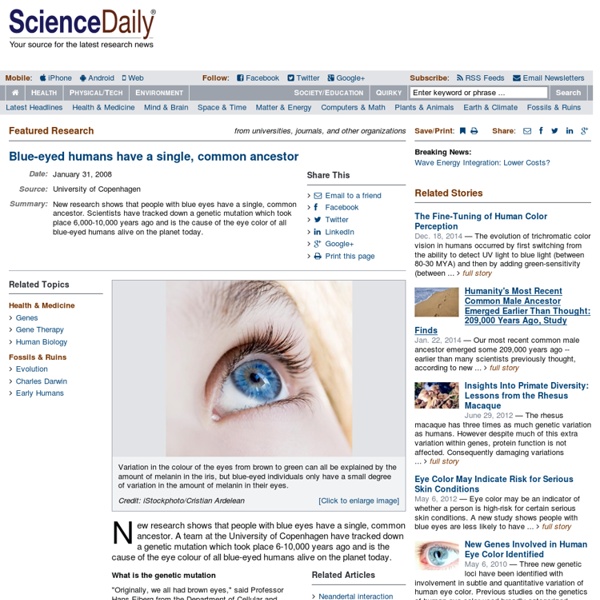 New research shows that people with blue eyes have a single, common ancestor. A team at the University of Copenhagen have tracked down a genetic mutation which took place 6-10,000 years ago and is the cause of the eye colour of all blue-eyed humans alive on the planet today. What is the genetic mutation "Originally, we all had brown eyes," said Professor Hans Eiberg from the Department of Cellular and Molecular Medicine. "But a genetic mutation affecting the OCA2 gene in our chromosomes resulted in the creation of a "switch," which literally "turned off" the ability to produce brown eyes." The OCA2 gene codes for the so-called P protein, which is involved in the production of melanin, the pigment that gives colour to our hair, eyes and skin. Limited genetic variation Variation in the colour of the eyes from brown to green can all be explained by the amount of melanin in the iris, but blue-eyed individuals only have a small degree of variation in the amount of melanin in their eyes. Related:  SORT: MISC PEARL: IN PROGRESS

First-ever high-resolution images of a molecule as it breaks and reforms chemical bonds When Felix Fischer of the U.S. Department of Energy's Lawrence Berkeley National Laboratory (Berkeley Lab) set out to develop nanostructures made of graphene using a new, controlled approach to chemical reactions, the first result was a surprise: spectacular images of individual carbon atoms and the bonds between them. "We weren't thinking about making beautiful images; the reactions themselves were the goal," says Fischer, a staff scientist in Berkeley Lab's Materials Sciences Division (MSD) and a professor of chemistry at the University of California, Berkeley. "But to really see what was happening at the single-atom level we had to use a uniquely sensitive atomic force microscope in Michael Crommie's laboratory." Crommie is an MSD scientist and a professor of physics at UC Berkeley. What the microscope showed the researchers, says Fischer, "was amazing." The researchers report their results in the June 7, 2013 edition of the journal Science , available in advance on Science Express .

Lost pyramids spotted by space scientists - Technology & science - Science Seventeen lost pyramids are believed to have been found in Egypt by a team of space archaeologists from Alabama, according to a report. Sarah Parcak and her team at a NASA-sponsored laboratory at the University of Alabama at Birmingham made the discoveries using a satellite survey, and also found more than 1,000 tombs and 3,000 ancient settlements in infrared images that show up buildings underground, BBC News reported. The BBC said that two of the suspected pyramids had been confirmed by initial excavations. "We were very intensely doing this research for over a year. I could see the data as it was emerging, but for me the 'aha' moment was when I could step back and look at everything that we'd found, and I couldn't believe we could locate so many sites all over Egypt," Parcak said. She said it was likely that more buildings would be found. "These are just the sites [close to] the surface. "It gives us a much bigger perspective on archaeological sites.

Vitamin B-6 Deficiency Sign: No Dream Recall On the way home from preschool the other day, five-year-old Frederick was recounting his dream for the night. As he described the dream, I thought “I must write about this on the site.” What I thought to myself as he told me the story was “Good news. His B-6 status is good.” Your regular doctor will not have this information but pioneer in mental health and food nutrients, Carl Pfieffer, describes in his book Nutrition and Mental Illness that in the presence of a B-6 deficiency you do not recall your dreams at night. 192 How many times have you said, “I don’t have dreams”? You likely do have dreams but you just don’t remember them. I did have a dream last night. Your doctor can test your B-6 level but some will start with a more general plasma homocysteine that is associated with poor folate, B-12, and/or B-6. B-6, by the way, is critical in converting your proteins such as tryptophan into key neurotransmitters such as serotonin. “Children were screaming and laughing. “Were they scared?”

Understanding the Fourier transform » #AltDevBlogADay Yes, I realize that after reading the title of this post, 99% of potential readers just kept scrolling. So to the few of you who clicked on it, welcome! Don’t worry, this won’t take long. A very long time ago, I was curious how to detect the strength of the bass and treble in music, in order to synchronize some graphical effects. What I found was the Discrete Fourier Transform (DFT), which looks like this: This formula, as anyone can see, makes no sense at all. Eventually, I was able to visualize how it works, which was a bit of a lightbulb for me. Disclaimer: my math skills are pitch-patch at best, and this is just intended to be an informal article, so please don’t expect a rigorous treatment. A quick bit of background – what does the Fourier transform do? The time domain representation (a series of evenly spaced samples over time)The frequency domain representation (the strength and phase of waves, at different frequencies, that can be used to reconstruct the signal)

Egypt Pyramids - Secret Information, Knowledge, and Wisdom The Great pyramid encrypted the dimensions of the earth and was aligned to certain stars and constellations at specific angels (angles) geometrically and numbers which were considered divine according to mathematic rarity, oddity, location, or center. Numbers can be used to form geometric shapes and symbols to tell a story orally or written. The great Pyramid and all wonders of the world including the Bible have a special message built in to them. The constellations tell the story of history and Jesus Christ to come and die on the cross. Notice is the picture to the right that if you draw a line north to south and east to west if forms a cross going right to the start of Pisces the fish. How many fish did Jesus catch? So peter took the advice of Jesus and tried again even though he had lost faith and hope, and was exhausted from working all night. His pride and EGO could have prevented him from trying one last time and here is the lesson which ties into everything in the great pyramid.

Bayes' Theorem An Intuitive Explanation of Bayes' Theorem Bayes' Theorem for the curious and bewildered; an excruciatingly gentle introduction. Your friends and colleagues are talking about something called "Bayes' Theorem" or "Bayes' Rule", or something called Bayesian reasoning. They sound really enthusiastic about it, too, so you google and find a webpage about Bayes' Theorem and... It's this equation. That's all. So you came here. Why does a mathematical concept generate this strange enthusiasm in its students? Soon you will know. While there are a few existing online explanations of Bayes' Theorem, my experience with trying to introduce people to Bayesian reasoning is that the existing online explanations are too abstract. Or so they claim. And let's begin. Here's a story problem about a situation that doctors often encounter: What do you think the answer is? Next, suppose I told you that most doctors get the same wrong answer on this problem - usually, only around 15% of doctors get it right. E. E.