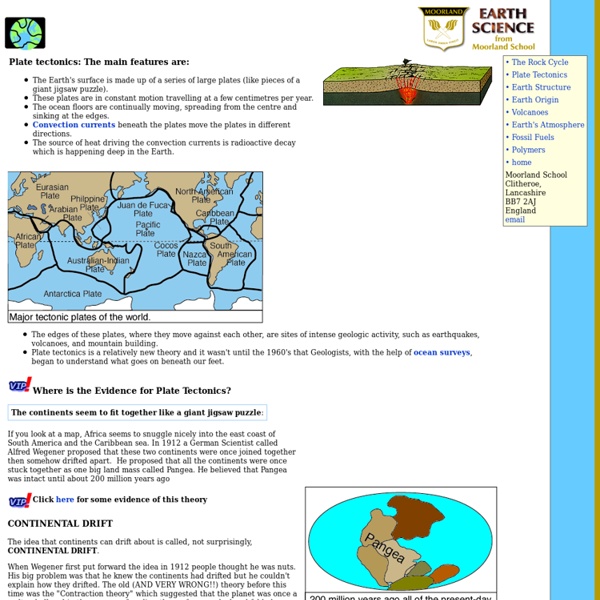 The edges of these plates, where they move against each other, are sites of intense geologic activity, such as earthquakes, volcanoes, and mountain building. Plate tectonics is a relatively new theory and it wasn't until the 1960's that Geologists, with the help of ocean surveys, began to understand what goes on beneath our feet. Where is the Evidence for Plate Tectonics? It is hard to imagine that these great big solid slabs of rock could wander around the globe. Scientists needed a clue as to how the continents drifted. Click here for the Scotland story Picture the following in your mind: You have a nine piece jigsaw (now there's a challenge). What do you think will happen to the puzzle? Now let's think back to our plates being created at the mid-ocean ridges, it seems to be a good idea but if this is the only type of plate movement then the world would get bigger and bigger. The floor of the Easter Pacific is moving towards South America at a rate of 9 centimetres per year.

Animated Plate Tectonics Quicktime versionAVI version Animated gifs Last 750 million years: [1.04 MB] [506 KB] [261 KB] Last 750 million years in reverse: [1.04 MB] [506 KB] From 750 mya to the beginning of the Paleozoic: [294 KB] [166 KB] From 750 mya to the beginning of the Mesozoic: [532 KB] [284 KB] [156 KB] From the beginning of the Mesozoic to Recent: [301 KB] [163 KB] [96 KB] All animations built from maps used with the permission of C.R. There are a number of excellent sites dealing with the modern theory of plate tectonics. The Paleomap project at the University of Texas at Arlington.Paleogeography Through Geologic Time by Ron Blakey at Northern Arizona University. Finally, it seems appropriate to mention the Alfred Wegener Institute, the German national research center for polar and marine research, carrying on Wegener's tradition of interdisciplinary earth science. Sources: S.