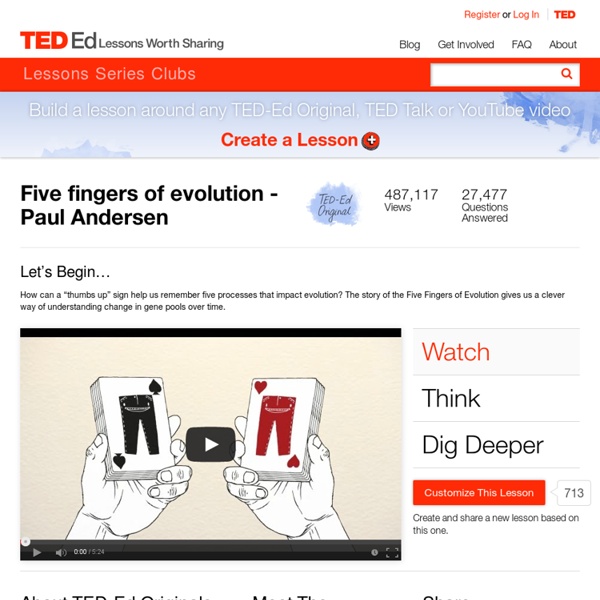 In his talk, Paul Andersen explains the five causes of microevolution. Research one example for each cause in the human population. Use the following population simulator to simulate microevolution: Run the simulation using the default settings.

Believe in Ohio STEM videos The Believe in Ohio program invites high school and college students, their instructors and the community to take a virtual field trip into the innovation economy of the future that is being built in Ohio through a series of six, free, regionalized, online courses. What this course is about and why is it important? Our nation is being challenged on an unprecedented level to maintain its historic prosperity. In the face of this challenge, over the last decade, the State of Ohio and its regions have been building Ohio’s innovation economy of the future. Today, the State of Ohio offers great promise for students who want to build a prosperous future for themselves by developing an entrepreneurial mindset, working hard, and applying what they are learning to develop the new products and services and jobs of the future.

Earth's mass extinction - Peter Ward This Island Earth is a 1955 American science fiction film directed by Joseph M. Newman. It is based on the novel of the same name byRaymond F. The Rare Earth hypothesis argues that complex extraterrestrial life requires an Earth-like planet with similar circumstance and that few if any such planets exist. The Life and Death of Planet Earth is a book by Peter Ward about how the new science of astrobiology charts the ultimate fate of our world. A runaway greenhouse effect is a process in which a net positive feedback between surface temperature and atmospheric opacity increases the strength of the greenhouse effect on a planet until its oceans boil away. The Permian Extinction is the Earth's most severe known extinction event, with up to 96% of all marine species and 70% of terrestrial vertebrate species becoming extinct. The three ages of dinosaurs were marked out by geologists to distinguish among various types of geologic strata laid down tens of millions of years ago.

How life came to land - Tierney Thys The Shape of Life series educator resources www.Shapeoflife.org Additional Shape of Life series resources (In particular, check out Bill Shear’s work TEDxSMU talk by Tierney Thys highlighting the 8 major body plans of animal evolution Beautiful imagery and rich information featuring planktonic animal life www.PlanktonChronicles.org The Tree of Life web project explores the connections and evolution of life. The World Register of Marine Species keeps a tally of all species described in the ocean. How many species inhabit Earth and how might we answer that question? Where did squid, jellyfish, and other sea creatures begin life? New videography techniques have opened up the oceans' microscopic ecosystem, revealing it to be both mesmerizingly beautiful and astoundingly complex.

Curiosity, discovery and gecko feet - Robert Full UC Berkeley biologist Robert Full is fascinated with cockroach legs that allow them to scuttle at full speed across loose mesh and gecko feet that have billions of nano-bristles to run straight up walls. He's using his research to design the perfect robotic "distributed foot," adding spines, hairs and other parts to metal legs and creating versatile scampering machines. He's helped create robots, such as Spinybot, which can walk up sheer glass like a gecko -- and he even helped Pixar create more realistic insect animations in the film A Bug's Life. Robert Full on animal movement Robert Full: Engineering and evolution Robert Full: Learning from the gecko's tail

Are we ready for neo-evolution? - Harvey Fineberg Theodosius Grygorovych Dobzhansky was a prominent geneticist and evolutionary biologist, and a central figure in the field of evolutionary biology for his work in shaping the unifying modern evolutionary synthesis. Antonio Damasio's research in neuroscience has shown that emotions play a central role in social cognition and decision-making. His work has had a major influence on current understanding of the neural systems, which underlie memory, language, consciousness. Listen to his TED talk about the quest to understand consciousness. The Big Bang theory is an effort to explain what happened at the very beginning of our universe. Evolution is the change in the inherited characteristics of biological populations over successive generations. The Human Genome Project (HGP) was one of the great feats of exploration in history — an international research effort to sequence and map all of the genes - together known as the genome - of members of our species, Homo sapiens.