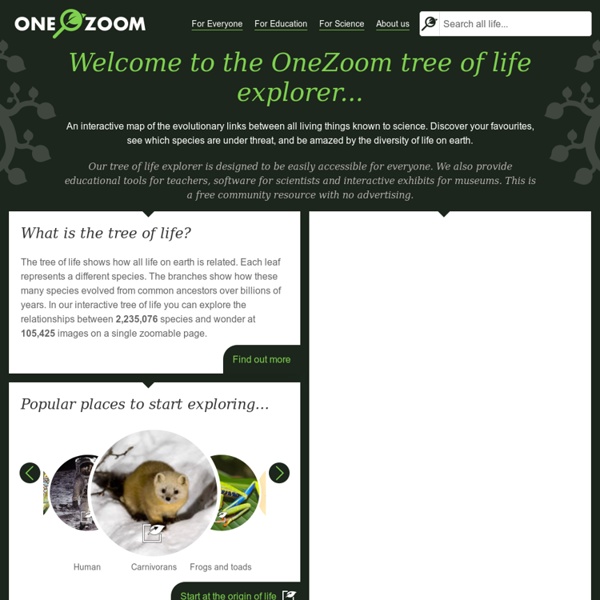 OneZoom Tree of Life Explorer OneZoom is committed to heightening awareness about the diversity of life on earth and its evolutionary history. Here you can explore the tree of life in a new way: it's like a map, everything is on one page, all you have to do is use your mouse wheel to zoom in and out. Choose your tree or video Watch video: Plants: 31128 species

This site publishes high-touch, time-intensive data visualizations (and has a business that sustains it) Over 7,000 artists played in the New York City area in 2013. Only 21 of those later made it, really made it, headlining at a venue with an over 3,000-person capacity — among them, bigger names like Chance the Rapper, X Ambassadors, Sam Smith, and Sylvan Esso. I learned this sort of random but fascinating tidbit from a data visualization titled “The Unlikely Odds of Making it Big,” from the site The Pudding. The Pudding is the home to high-touch, painstakingly crafted data visualizations — what the site calls “visual essays” — that are distinct in their obsessive complexity over points of cultural curiosity. Most pieces stand wholly apart from the U.S. news cycle; no anxiety-inducing interactives around budget, taxes, health care.

The Earthquake That Will Devastate Seattle When the 2011 earthquake and tsunami struck Tohoku, Japan, Chris Goldfinger was two hundred miles away, in the city of Kashiwa, at an international meeting on seismology. As the shaking started, everyone in the room began to laugh. Earthquakes are common in Japan—that one was the third of the week—and the participants were, after all, at a seismology conference. Data visualisation: how Alberto Cairo creates a functional art It's not enough for visualisations to string the correct numbers together, they should - in the words of William Morris - be beautiful and useful. And one of the leading experts in making data beautiful is Alberto Cairo - who teaches information graphics and visualisation at the University of Miami's School of Communication. His latest book, The Functional Art, is a comprehensive guide not only to how to do it; but how to get it right, too. And, if you're interested in data visualisation, you must not only read this but absorb each of the lessons he teaches so patiently. It's worth checking out, even if producing charts is not your day job. Cairo explains patiently why a bar chart is superior to a bubble chart, for example, or how to use colour.

How plants work - Science (4) - ABC Splash - Overview Plants are the only living things that can make their own food. They do this during the day while it's light, using a process called photosynthesis, which uses carbon dioxide and produces oxygen. During the day and night plants take in oxygen and release carbon dioxide through respiration. Public-Friendly Open Science Previous “A “Modern Scientist” Manifesto” In the 21st century science is growing more technical and complex, as we gaze further and further while standing on the shoulders of many generations of giants. The public has often a hard time understanding research and its relevance to society. One of the reasons for this is that scientists do not spend enough time communicating their findings outside their own scientific community. Obviously there are some exceptions, but the rule is that scientists write content for scientists. Academia is often perceived as an ivory tower, and when new findings are shared with the outside world, this is not done by scientists, but by the media or even the political class.

The Lives of 10 Famous Painters, Visualized as Minimalist Infographic Biographies By Maria Popova For their latest masterpiece, my friend Giorgia Lupi and her team at Accurat — who have previously given us such gems as a timeline of the future based on famous fiction, a visualization of global brain drain, and visual histories of the Nobel Prize and the 100 geniuses of language — have teamed up with illustrator Michela Buttignol to visualize the lives of ten famous painters, using the visual metaphors of painting and the specific stylistic preferences — shapes, colors, proportions — of each artist. Each visual biography depicts key biographical moments — births, deaths, love affairs, marriages, birth of children, travel — as well as notable and curious features like handedness (mostly righties, with the exception of Klee), astrological sign, and connections. For a closer look, click each image to view the full-size version: The visualizations are available as art prints on Society6.