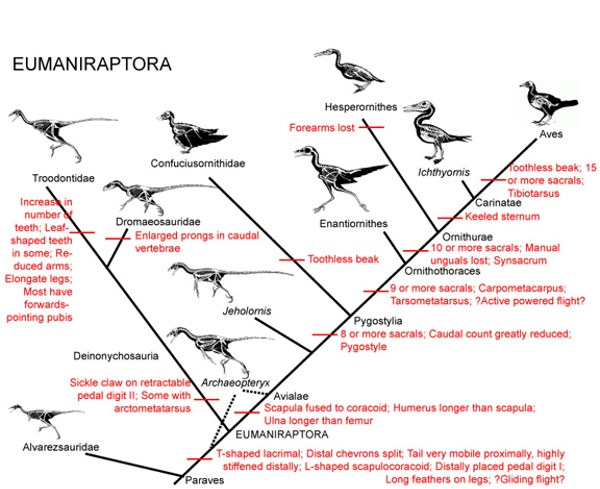 Dinosaur True Colors Revealed for First Time by Feather Study Pigments have been found in fossil dinosaurs for the first time, a new study says. The discovery may prove once and for all that dinosaurs' hairlike filaments—sometimes called dino fuzz—are related to bird feathers, paleontologists announced today. (Pictures: Dinosaur True Colors Revealed by Feather Find.) The finding may also open up a new world of prehistoric color, illuminating the role of color in dinosaur behavior and allowing the first accurately colored dinosaur re-creations, according to the study team, led by Fucheng Zhang of China's Institute for Vertebrate Paleontology. The team identified fossilized melanosomes—pigment-bearing organelles—in the feathers and filament-like "protofeathers" of fossil birds and dinosaurs from northeastern China. Found in the feathers of living birds, the nano-size packets of pigment—a hundred melanosomes can fit across a human hair—were first reported in fossil bird feathers in 2008. End of Dinosaur-Bird Debate? A New World of Dinosaur Color

Cretaceous Birds Survived Mass Extinction By Eating Seeds Variations in teeth shape – what’s called dental disparity – is a proxy for ecological stability. Decreases in variation would indicate ecosystem decline, but if differences between teeth were maintained over time, that would suggest a rich, stable ecosystem. To understand what bird-like dinosaurs were up to at the end-Cretaceous boundary, a team led by Derek Larson from the University of Toronto analyzed 3,104 maniraptoran teeth unearthed throughout western North America. These fossils represent four maniraptoran groups spanning 18 million years of the Cretaceous. Representative teeth from the four groups of bird-like dinosaurs, with enlarged images of tooth serrations. Tooth shape disparity showed no major decline leading up to the mass extinction event within any of the groups studied, but this prolonged period of ecological stability was followed by the sudden extinction of many bird-like dinosaurs. Photo Gallery

When Did Dino's Sprout Wings? Dinosaurs still walk—and fly—among us: We call them birds. Most paleontologists think birds descended from a group of winged dinosaurs, and thus dinos never went completely extinct. But where did the wings come from? New discoveries from Canada suggest that both wings and feathers arose earlier in dinosaur evolution than previously thought, possibly to attract members of the opposite sex or to protect hatching baby dinos. Although many details of the origins of birds and winged flight are fiercely debated, researchers generally agree that birds belong to a group of dinosaurs called maniraptorans, some of which had feathers and wings and could probably fly.Microraptor, discovered in China, is a leading example of such a dino flyer. But the restriction of these discoveries to such a limited geographical area has left a gap in the fossil record, leaving paleontologists to wonder whether wings and feathers might have evolved in dinosaur groups older than the maniraptorans.

CRACKED: 7 Animals That Are Evolving Right Before Our Eyes People who doubt evolution tend to have one main argument: "If evolution is true, why do we still see monkeys running around today, all chimp-like? Where are all the monkey-men I was promised?" Well, if you or someone you know refuses to believe that organisms change over time without proof on a monkey-man level, here are a buttload of animals in the middle of getting their evolve on. Elephants are Evolving to Lose Their Tusks (and Avoid Poachers) Here's a joke: What did the elephant say to the poacher? Getty"Stop! Sorry about that. GettyAnd ever since animal rights got involved, unemployment has shot up 300 percent. So elephants have decided to take matters into their own hands ... or trunks or weirdly rounded three-toed feet or whatever. By 2005, it was estimated that the tuskless population had risen to between 5 and 10 percent. GettyJust like your debilitating lisp after reading that out loud Which is incredible, because it's not like tusks are the elephant version of wisdom teeth.

How Dinosaurs Shrank and Became Birds From Quanta Magazine (find original story here). Modern birds descended from a group of two-legged dinosaurs known as theropods, whose members include the towering Tyrannosaurus rex and the smaller velociraptors. The theropods most closely related to avians generally weighed between 100 and 500 pounds — giants compared to most modern birds — and they had large snouts, big teeth, and not much between the ears. For decades, paleontologists’ only fossil link between birds and dinosaurs was archaeopteryx, a hybrid creature with feathered wings but with the teeth and long bony tail of a dinosaur. To explain this miraculous metamorphosis, scientists evoked a theory often referred to as “hopeful monsters.” But it has become increasingly clear that the story of how dinosaurs begat birds is much more subtle. A Phantom Leap In the 1990s, an influx of new dinosaur fossils from China revealed a feathery surprise. Yet once those avian features were in place, birds took off.

10 Animals You Won't Believe Are Closely Related Thanks to the know-it-all from second grade, we're all aware that dolphins and whales are mammals, not fish. But it's probably been a while since you've pondered just how incredibly, mind-blowingly weird it is that you and whales were the same animal more recently than whales and sharks. Or to put it in chart form, you and whales split up somewhere in the big tangle of bio diversity up top labeled "Age of Mammals" while whales and fish haven't been the same animals since way the hell down ... ... here where you see the word Selacchi. Courtesy of Getty Images." Turns out it's the same reason birds and bats both ended up flying around on wings: convergent evolution, the smarmy term for when completely unrelated species develop similar traits. Image By Glen Fergus What it looks like: You don't need your wife standing next to you screaming, "MOUSE! What it actually is: A tiny little mutant koala Image By Quartl Image By Cody PopeThe worst part? Image By Jagvar Via Wikipedia