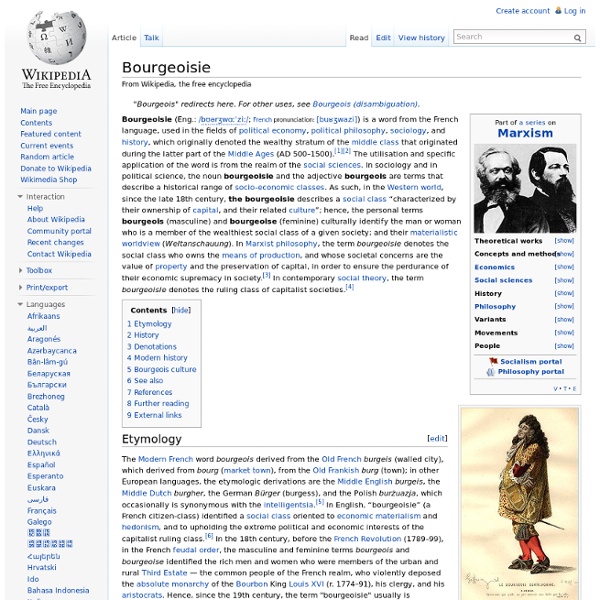 The prototypical bourgeois: Monsieur Jourdain, the protagonist of the play Le Bourgeois gentilhomme (1670), by Molière, is the best would-be nobleman that money can buy. In Marxist philosophy, the term bourgeoisie denotes the social class who owns the means of production and whose societal concerns are the value of property and the preservation of capital, in order to ensure the perpetuation of their economic supremacy in society.[3] Joseph Schumpeter instead saw the creation of new bourgeoisie as the driving force behind the capitalist engine, particularly entrepreneurs who took risks in order to bring innovation to industries and the economy through the process of creative destruction.[4] Etymology[edit] The 16th-century German banker Jakob Fugger and his principal accountant, M. History[edit] Denotations[edit] The Dictatorship of the Bourgeoisie[edit] Nomenclatura[edit] In France and French-speaking countries[edit] Related:  Societal evolution

Glossary of Terms: Bo Bonapartism First used in reference to the government established by Louis Bonaparte, who had been elected to the office of presidency in 1848. Three years following, on 2 December, 1851, he staged a coup d'etat against his government, setting up a military dictatorship in its place. Marx soon after wrote a popular pamphlet called the Eighteenth Brumaire of Louis Bonaparte "demonstrating how the class struggle in France created circumstances and relationships that made it possible for a grotesque mediocrity to play a hero's part." Bonapartism has been used to describe a government that forms when class rule is not secure and a military, police, and state bureaucracy intervenes to establish order. Further readings: Trotsky, The Rise of Hitler and Destruction of the German Left; and The Workers' State, Thermidor and Bonapartism. Bourgeoisie The class of people in bourgeois society who own the social means of production as their Private Property, i.e., as capital. Bourgeois Democracy V.I.

History of maps and cartography ES 551 -- James S. Aber What is a Map? A map is a graphic representation or scale model of spatial concepts. Old maps provide much information about what was known in times past, as well as the philosophy and cultural basis of the map, which were often much different from modern cartography. Early Maps Cartography is the art and science of making maps. Greek and Roman cartography reached a culmination with Claudius Ptolemaeus (Ptolemy, about A.D. 85-165). Ptolemy's map of the world. Medieval Maps During the Medieval period, European maps were dominated by religious views. Vesconte's world map (1321).Hereford mappamundi (1290). al-Idrisi's world map (12th century). Renaissance Maps The invention of printing made maps much more widely available beginning in the 15th century. Printing with engraved copper plates appeared in the 16th century and continued to be the standard until photographic techniques were developed. Heart-shaped projection by Sylvanus (1511). Mercator's world map (1569).

Paris Commune The Paris Commune (French: La Commune de Paris, IPA: [la kɔmyn də paʁi]) was a revolutionary and socialist government that briefly ruled Paris from 18 March until 28 May 1871.[3] The killing of two French army generals by soldiers of the Commune's National Guard and the refusal of the Commune to accept the authority of the French government led to its harsh suppression by the regular French Army in "La Semaine sanglante" ("The Bloody Week") beginning on 21 May 1871.[4] Debates over the policies and outcome of the Commune had significant influence on the ideas of Karl Marx and Vladimir Lenin.[5] Prelude to the Paris Commune[edit] On 2 September 1870, after his unexpected defeat at the Battle of Sedan in the Franco-Prussian War, Emperor Louis Napoleon III surrendered to the Prussian Chancellor, Otto von Bismarck. The population of Paris on the eve of Commune[edit] The radicalization of the Paris workers[edit] Radicals and revolutionaries[edit] The defenders of Paris[edit]

History of the Internet The history of the Internet begins with the development of electronic computers in the 1950s. Initial concepts of packet networking originated in several computer science laboratories in the United States, Great Britain, and France. The US Department of Defense awarded contracts as early as the 1960s for packet network systems, including the development of the ARPANET (which would become the first network to use the Internet Protocol.) The first message was sent over the ARPANET from computer science Professor Leonard Kleinrock's laboratory at University of California, Los Angeles (UCLA) to the second network node at Stanford Research Institute (SRI). Access to the ARPANET was expanded in 1981 when the National Science Foundation (NSF) funded the Computer Science Network (CSNET). Precursors The telegraph system is the first fully digital communication system. Three terminals and an ARPA A pioneer in the call for a global network, J. Packet switching Networks that led to the Internet

Economic Manuscripts: Capital Vol. I - Chapter Six Karl Marx. Capital Volume One Chapter Six: The Buying and Selling of Labour-Power The change of value that occurs in the case of money intended to be converted into capital, cannot take place in the money itself, since in its function of means of purchase and of payment, it does no more than realise the price of the commodity it buys or pays for; and, as hard cash, it is value petrified, never varying. [1] Just as little can it originate in the second act of circulation, the re-sale of the commodity, which does no more than transform the article from its bodily form back again into its money-form. The change must, therefore, take place in the commodity bought by the first act, M-C, but not in its value, for equivalents are exchanged, and the commodity is paid for at its full value. We are, therefore, forced to the conclusion that the change originates in the use-value, as such, of the commodity, i.e., in its consumption. The owner of labour-power is mortal. Footnotes 1. 2. 3. 4. 5.

Tamar of Georgia Tamar the Great (Georgian: თამარი) (c. 1160 – 18 January 1213), was the Queen Regnant of Georgia from 1184 to 1213, who presided over the apex of the Georgian Golden Age.[1] A member of the Bagrationi dynasty, her position as the first woman to rule Georgia in her own right was emphasized by the title mep'e ("king"), commonly afforded to Tamar in the medieval Georgian sources.[2] Tamar was proclaimed heir apparent and co-ruler by her reigning father George III in 1178, but she faced significant opposition from the aristocracy upon her ascension to full ruling powers after George's death. Tamar was successful in neutralizing this opposition and embarked on an energetic foreign policy aided by the decline of the hostile Seljuq Turks. Relying on a powerful military élite, Tamar was able to build on the successes of her predecessors to consolidate an empire which dominated the Caucasus until its collapse under the Mongol attacks within two decades after Tamar's death.[3]

Proletariat The proletariat (/ˌproʊlɪˈtɛəriːət/ from Latin proletarius) is a term used to describe the class of wage-earners (especially industrial workers) in a capitalist society whose only possession of significant material value is their labour-power (their ability to work);[1] a member of such a class is a proletarian. Usage in Roman law[edit] As defined in the Constitution of the Roman Republic, the proletarii constituted a social class of Roman citizens owning little or no property. Although included in one of the five support centuriae of the Comitia Centuriata, proletarii were largely deprived of their voting rights due to their low social status caused by their lack of "even the minimum property required for the lowest class"[4] and a class-based hierarchy of the Comitia Centuriata. Usage in Marxist theory[edit] A 1911 Industrial Worker publication advocating industrial unionism based on a critique of capitalism. See also[edit] Reference notes[edit] Further reading[edit] External links[edit]

Islamic Golden Age Causes[edit] With a new, easier writing system and the introduction of paper, information was democratized to the extent that, probably for the first time in history, it became possible to make a living from simply writing and selling books.[4] The use of paper spread from China into Muslim regions in the eighth century CE, arriving in Spain (and then the rest of Europe) in the 10th century CE. It was easier to manufacture than parchment, less likely to crack than papyrus, and could absorb ink, making it difficult to erase and ideal for keeping records. Eastern Christian scholars (including ibn Ishaq) were important in preserving ancient Greek texts.[8] During the 4th through the 7th centuries, scholarly work in the Syriac and Greek languages was either newly initiated, or carried on from the Hellenistic period. Philosophy[edit] Arabic philosophic literature was translated into Latin, and Ladino, contributing to the development of modern European philosophy. Science[edit] Physics[edit]

Class conflict Class conflict, frequently referred to as class warfare or class struggle, is the tension or antagonism which exists in society due to competing socioeconomic interests and desires between people of different classes. The view that the class struggle provides the lever for radical social change for the majority is central to the work of Karl Marx and the anarchist Mikhail Bakunin. However, the discovery of the existence of class struggle is not the product of their theories; their theories can instead be seen as a response to the existence of class struggles. Usage In the past the term Class conflict was a term used mostly by socialists, who define a class by its relationship to the means of production — such as factories, land and machinery. The anarchist Mikhail Bakunin argued that the class struggle of the working class, peasantry and poor had the potential to lead to a social revolution involving the overthrow of ruling elites, and the creation of libertarian socialism. Arab Spring

Dialectic Dialectic (also dialectics and the dialectical method) is a method of argument for resolving disagreement that has been central to European and Indian philosophy since antiquity. The word dialectic originated in ancient Greece, and was made popular by Plato in the Socratic dialogues. The dialectical method is discourse between two or more people holding different points of view about a subject, who wish to establish the truth of the matter guided by reasoned arguments.[1] The term dialectics is not synonymous with the term debate. The Sophists taught aretē (Greek: ἀρετή, quality, excellence) as the highest value, and the determinant of one's actions in life. Socrates favoured truth as the highest value, proposing that it could be discovered through reason and logic in discussion: ergo, dialectic. Principles It is also possible that the rejection of the participants' presuppositions is resisted, which then might generate a second-order controversy.[7] Western dialectical forms

Marxism–Leninism Marxism–Leninism is a political ideology combining Marxism (the scientific socialist concepts theorised by Karl Marx and Friedrich Engels) and Leninism (Vladimir Lenin's theoretical expansions of Marxism which include anti-imperialism, democratic centralism, and Vanguardist party-building principles).[1] Marxism–Leninism was the official ideology of the Communist Party of the Soviet Union and of the Communist International (1919–43), making it the guiding ideology of the world communist movement. As such, it is the most prominent ideology associated with communism. The ultimate goal of Marxism–Leninism is the development of socialism into the full realisation of communism, a classless social system with common ownership of the means of production and with full social equality of all members of society. The phrase "Marxism–Leninism" was introduced by Joseph Stalin in the 1930s to distinguish the new synthesis of Marxism with the theories of Lenin. Values Etymology Historical Current usage

Cuba Cuba, officially the Republic of Cuba ( i/ˈkjuːbə/; Spanish: República de Cuba, pronounced: [reˈpuβlika ðe ˈkuβa] ( )), is an island country in the Caribbean. The island of Cuba was inhabited by numerous Mesoamerican tribes prior to the landing of Italian explorer Christopher Columbus in 1492, who claimed it for the Kingdom of Spain. Cuba is the largest island in the Caribbean, and with over 11 million inhabitants, is the second-most populous after Hispaniola, albeit with a much lower population density than most nations in the region. Cuba ranks high in metrics of health and education, with a high Human Development Index of 0.780 as of 2013. Etymology[edit] History[edit] Prehistory[edit] Sketch of a Taíno woman, also known as the Arawak by the Spanish. Cuba was inhabited by American Indian people known as the Taíno, also called Arawak by the Spanish, and Guanajatabey and Ciboney people before the arrival of the Spanish. Spanish colonization and rule (1492-1898)[edit]