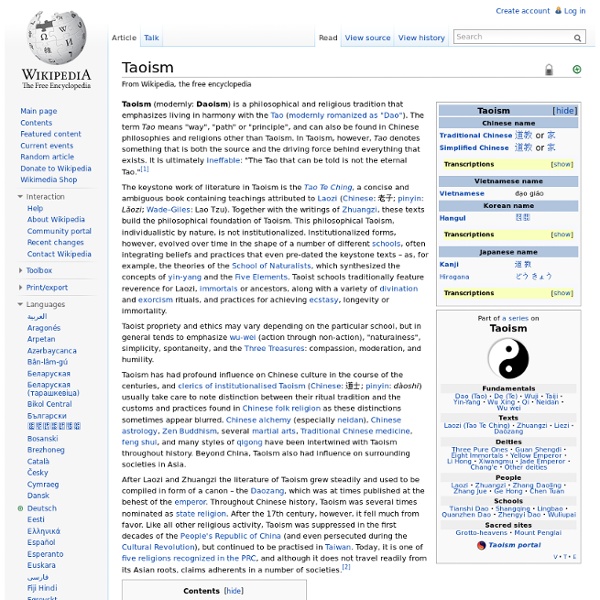 Taoist rite at the Qingyanggong (Bronze Ram Temple) in Chengdu, Sichuan. Taoism, or Daoism, is a philosophical, ethical, and religious tradition of Chinese origin that emphasizes living in harmony with the Tao (also romanized as Dao). The term Tao means "way", "path" or "principle", and can also be found in Chinese philosophies and religions other than Taoism. In Taoism, however, Tao denotes something that is both the source and the driving force behind everything that exists. It is ultimately ineffable: "The Tao that can be told is not the eternal Tao. While Taoism drew its cosmological notions from the tenets of the School of Yin Yang, the Tao Te Ching, a compact and ambiguous book containing teachings attributed to Laozi (Chinese: 老子; pinyin: Lǎozǐ; Wade–Giles: Lao Tzu), is widely considered its keystone work. After Laozi and Zhuangzi, the literature of Taoism grew steadily and was compiled in form of a canon—the Daozang—which was published at the behest of the emperor. Ethics[edit]

Taoism – Ancient Wisdom for a Modern World: Yin and Yang by Ted Kardash This is the second in a series of six articles on fundamental Taoist principles. Each commentary will focus on explaining and understanding a separate principle along with its application to daily living. Taoist teachings function as a guide to daily living. Their purpose is to assist us in experiencing our essential nature as inseparable from that of the cosmos, to be part of the flow of life. Gaining knowledge of the main principles of Taoist thought allows us to cultivate and strengthen our own process of self-exploration, growth, and transformation, and to connect us deeply to our inner nature and to the world around us.

Taoism Origins, Taoism History, Taoism Beliefs Taoism, also known as Daoism, is an indigenous Chinese religion often associated with the Daode jing (Tao Te Ching), a philosophical and political text purportedly written by Laozi (Lao Tzu) sometime in the 3rd or 4th centuries B.C.E. The Daode jing focuses on dao as a "way" or "path" — that is, the appropriate way to behave and to lead others — but the Daode jing also refers to Tao as something that existed "before Heaven and Earth," a primal and chaotic matrix from which all forms emerged. Taoism did not exist as an organized religion until the Way of the Celestial Masters sect was founded in 142 C.E. by Zhang Daoling, who based the sect on spiritual communications from the deified Laozi.

Flapper A flapper onboard ship (1929) Flappers were a "new breed" of young Western women in the 1920s who wore short skirts, bobbed their hair, listened to jazz, and flaunted their disdain for what was then considered acceptable behavior. Flappers were seen as brash for wearing excessive makeup, drinking, treating sex in a casual manner, smoking, driving automobiles, and otherwise flouting social and sexual norms.[1] Flappers had their origins in the liberal period of the Roaring Twenties, the social, political turbulence and increased transatlantic cultural exchange that followed the end of World War I, as well as the export of American jazz culture to Europe. Etymology[edit]

The Art of Getting Started This is my first blog for , and I've decided to begin at the beginning. Like many writers, I dread the start of a new piece of work, or, to put it more accurately, I dread the of the start. To begin anything is to open myself up to the possibility of failure and disappointment, two things nobody enjoys very much. Ideally, I would only ever embark on projects that were guaranteed to be perfect both in conception and execution, and were therefore also guaranteed to be anxiety-free, but as it is I am a real person doing real things in the real world, so my choice is to face the anxiety - the feeling I mentioned earlier - or never get anything done ever. Perfectionism is, apparently, functional for some people.

Online religious book publisher seeks growth By Ramona Turner Posted: 08/11/2009 01:30:08 AM PDT Click photo to enlarge SANTA CRUZ -- When John Bruno Hare first set foot on the UC Santa Cruz campus in 1972 to study linguistics and anthropology, he never thought he'd wind up owning a Web site about world religions. "It was always one of those side projects I never really had time for," said the former full-time software engineer who lives in Santa Cruz. What is Yin Yang? - Personal Tao A starting definition: The nature of change, balanced as two halves of a whole. Yin Yang is perhaps the most known and documented concept used within Taoism. Yin Yang is the concept of duality forming a whole. We encounter examples of Yin and Yang every day. As examples: night (Yin) and day (Yang), female (Yin) and male (Yang).

Taoist Texts Sacred-texts home Confucianism I Ching Buddhism Articles: Traditional Chinese Religion OCRT: Taoism Buy CD-ROM Buy books about Taoism These are principal texts of Taoism. Taoism, along with Confucianism and Buddhism was one of the principal religions of feudal China. Tao-te Ching translated by James Legge [1891] 66,099 bytesThe Tao te Ching is one of the most widely read sacred texts, due to its simplicity and depth. It appeal is universal, and has been found relevant by Christians, Hindus, Muslims, Buddhists, and even Quantum Physicists. Jazz Age The Jazz Age was a feature of the 1920s (ending with The Great Depression) when jazz music and dance became popular. This occurred particularly in the United States, but also in Britain, France and elsewhere. Jazz played a significant part in wider cultural changes during the period, and its influence on pop culture continued long afterwards. Jazz music originated mainly in New Orleans, and is/was a fusion of African and European music. The Jazz Age is often referred to in conjunction with the phenomenon referred to as the Roaring Twenties. The term "Jazz Age" was coined by F.

9 Daily Habits That Will Make You Happier Happiness is the only true measure of personal success. Making other people happy is the highest expression of success, but it's almost impossible to make others happy if you're not happy yourself. With that in mind, here are nine small changes that you can make to your daily routine that, if you're like most people, will immediately increase the amount of happiness in your life: 1. Start each day with expectation. Lao-tzu Biography Who Was Lao-tzu Almost everything we know about Lao-tzu comes from the Historical Records of Ssu-ma Ch'ien. Lao-tzu is also one of the basic characters of the Chuang-tzu's stories - unfortunately they are mostly fiction. According to Ch'ien, Lao-tzu was born in the state of Ch'u, and his birthplace was in the nowadays Ho-nan province. He was a curator at the Royal Library when he met Confucius to talk about rites. This conversation offers much insight into the huge differences between Taoists and Confucians.

CenterTao.org Traditional, Philosophical Ways The Tao Te Ching (the core Taoist scripture) invites you to contemplate your innermost sense of reality. It doesn’t tell you what to do or think, but rather stimulates you to think and reflect. A Taoist world view can feel pretty ephemeral at times.

Taoism / Tao: Discussion Metaphysics Philosophy of Taoism, Tao. Lao Tzu, Chuang Tzu Quotes Information Pictures Discussion on Metaphysics / Philosophy of Tao, Taoism One Thing, Tao, Exists & Connects the Many Things Lao Tzu, Tao te Ching Quotes, Chuang Tzu, Taoism, Tao Quotations There is a thing, formless yet complete. Before heaven and earth it existed. Mental breakdown Definition[edit] The terms "nervous breakdown" and "mental breakdown" have not been formally defined through a medical diagnostic system such as the DSM-IV or ICD-10, and are nearly absent from current scientific literature regarding mental illness.[1][2] Although "nervous breakdown" does not necessarily have a rigorous or static definition, surveys of laypersons suggest that the term refers to a specific acute time-limited reactive disorder, involving symptoms such as anxiety or depression, usually precipitated by external stressors.[1] Specific cases are sometimes described as a "breakdown" only after a person becomes unable to function in day-to-day life.[3] Controversy[edit]

10 Golden Lessons from Albert Einstein Every day I remind myself that my inner and outer life are based on the labors of other men, living and dead, and that I must exert myself in order to give in the same measure as I have received and am still receiving - Albert Einstein Albert Einstein was an amazing physicist. He figured out so many universal principles and equations that he was way ahead of his fellow scientists at any point of time.