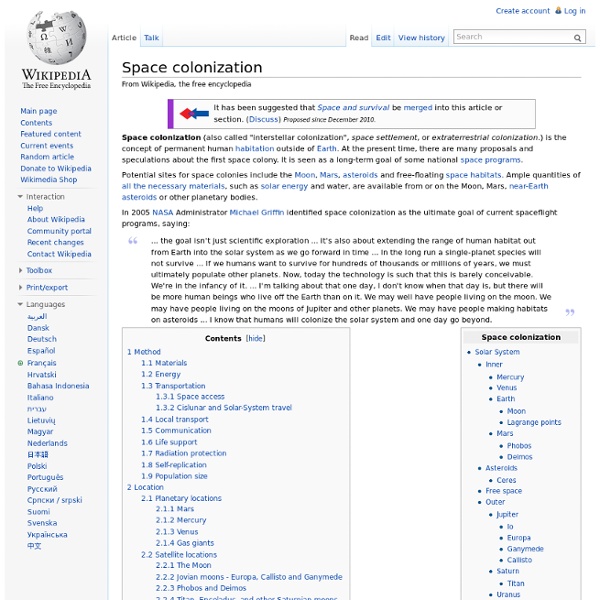 Space colonization (also called space settlement, or extraterrestrial colonization) is permanent human habitation that is not on Earth. Many arguments have been made for space colonization. The two most common ones are survival of human civilization and the biosphere from possible disasters (natural or man-made), and the huge resources in space for expansion of human society. However right now the challenges, both technological and economic, involved in building a space colony are as great as the potential payoff. There have been no space colonies built so far, nor are there any governments or large-scale private organizations with a timetable for building any. Reasons[edit] Survival of human civilization[edit] The primary argument that calls for space colonization as a first-order priority is as insurance of the survival of human civilization, by developing alternative locations off Earth where humankind could continue in the event of natural and man-made disasters. J. Goals[edit] Related:  astronomia & space • wikipedia 2

Space exploration Saturn V rocket, used for the American manned lunar landing missions The Moon as seen in a digitally processed image from data collected during a spacecraft flyby While the observation of objects in space, known as astronomy, predates reliable recorded history, it was the development of large and relatively efficient rockets during the early 20th century that allowed physical space exploration to become a reality. Common rationales for exploring space include advancing scientific research, uniting different nations, ensuring the future survival of humanity and developing military and strategic advantages against other countries. Space exploration has often been used as a proxy competition for geopolitical rivalries such as the Cold War. After the first 20 years of exploration, focus shifted from one-off flights to renewable hardware, such as the Space Shuttle program, and from competition to cooperation as with the International Space Station (ISS). First flights[edit]

Terraforming An artist's conception shows a terraformed Mars in four stages of development. Terraforming (literally, "Earth-shaping") of a planet, moon, or other body is the theoretical process of deliberately modifying its atmosphere, temperature, surface topography or ecology to be similar to the biosphere of Earth to make it habitable by Earth-like life. The term "terraforming" is sometimes used more generally as a synonym for planetary engineering, although some consider this more general usage an error.[citation needed] The concept of terraforming developed from both science fiction and actual science. The term was coined by Jack Williamson in a science-fiction story (Collision Orbit) published during 1942 in Astounding Science Fiction,[1] but the concept may pre-date this work. History of scholarly study[edit] In March 1979, NASA engineer and author James Oberg organized the First Terraforming Colloquium, a special session at the Lunar and Planetary Science Conference in Houston. Mars[edit]

Commercialization of space History[edit] The first commercial use of satellites may have been the Telstar 1 satellite, launched in 1962, which was the first privately sponsored space launch, funded by AT&T and Bell Telephone Laboratories. Telstar 1 was capable of relaying television signals across the Atlantic Ocean, and was the first satellite to transmit live television, telephone, fax, and other data signals.[2][3] Two years later, the Hughes Aircraft Company developed the Syncom 3 satellite, a geosynchronous communications satellite, leased to the Department of Defense. Between 1960 and 1966, NASA launched a series of early weather satellites known as Television Infrared Observation Satellites (TIROS). Beginning in 1997, Iridium Communications began launching a series of satellites known as the Iridium satellite constellation, which provided the first satellites for direct satellite telephone service.[14][15] Subscription satellite services[edit] Transponder leasing[edit] Ground equipment manufacturing[edit]

SETI Search Reveals No Alien Signals from Exoplanets Intelligent alien life is likely relatively rare throughout our Milky Way galaxy, with fewer than one in a million solar systems harboring civilizations advanced enough to send out radio signals, a new study reports. A research team that includes famed alien hunter Jill Tarter — the model for astronomer Ellie Arroway in Carl Sagan's famous book "Contact" — surveyed dozens of planet-hosting stars for radio signals from alien civilizations. They turned up nothing. "No signals of extraterrestrial origin were found," the researchers conclude in the study, which has been accepted for publication in The Astrophysical Journal. Searching for signs of intelligent life The team selected 86 stars using data from NASA's planet-hunting Kepler space telescope, and also observed 19 stars that serendipitously fell within range as they searched the primary targets. The researchers were working with the catalog of Kepler planetary candidates, which at the time included 1,235 possible exoplanets.

Space law Space law is an area of the law that encompasses national and international law governing activities in outer space. International lawyers have been unable to agree on a uniform definition of the term "outer space", although most lawyers agree that outer space generally begins at the lowest altitude above sea level at which objects can orbit the Earth, approximately 100 km (60 mi). The inception of the field of space law began with the launch of the world's first artificial satellite by the Soviet Union in October 1957. Named Sputnik 1, the satellite was launched as part of the International Geophysical Year. Since that time, space law has evolved and assumed more importance as mankind has increasingly come to use and rely on space-based resources. NASA STS-121 Launch Early developments[edit] International treaties[edit] Five international treaties have been negotiated and drafted in the COPUOS: International principles and declarations[edit] Consensus[edit] 1998 ISS agreement[edit]

Planetary habitability Understanding planetary habitability is partly an extrapolation of the Earth's conditions, as this is the only planet currently known to support life. Planetary habitability is the measure of a planet's or a natural satellite's potential to develop and sustain life. Life may develop directly on a planet or satellite or be transferred to it from another body, a theoretical process known as panspermia. As the existence of life beyond Earth is currently uncertain, planetary habitability is largely an extrapolation of conditions on Earth and the characteristics of the Sun and Solar System which appear favourable to life's flourishing—in particular those factors that have sustained complex, multicellular organisms and not just simpler, unicellular creatures. Research and theory in this regard is a component of planetary science and the emerging discipline of astrobiology. Suitable star systems[edit] Spectral class[edit] They live at least a few billion years, allowing life a chance to evolve.

Space Sciences Laboratory Coordinates: The Space Sciences Laboratory (SSL) is an Organized Research Unit of the University of California, Berkeley. It is located in the Berkeley Hills above the university campus. It has developed and continues to develop many projects in the space sciences. Current work[edit] SSL developed and maintains the SETI@home project which pioneered the application of distributed computing to the space sciences. It created the related projects Stardust@home and BOINC. It is home to the Space Physics Research Group, which does Plasma physics research. It has developed many satellite missions and serves as a ground station for those missions. It does science education outreach via the Center for Science Education (CSE). History[edit] The Laboratory began its operations in January 1960 with the appointment of its first director, Professor Samuel Silver. The space physics program directed by Professor Kinsey A. The NASA Facilities Grant precipitated the construction of SSL's original buildings.

Purple bacteria on Earth could survive alien light Public release date: 23-Jul-2013 [ Print | E-mail Share ] [ Close Window ] Contact: Annette Gallaghera.gallagher1@umiami.edu 305-284-1121University of Miami CORAL GABLES, FL (JULY 23, 2013) — Purple bacteria contain pigments that allow them to use sunlight as their source of energy, hence their color. Small as they are, these microbes can teach us a lot about life on Earth, because they have been around longer than most other organisms on the planet. Johnson, head of the inter-disciplinary research group in complexity in the College of Arts and Sciences at UM and his collaborators share their findings in a paper titled "Extreme alien light allows survival of terrestrial bacteria" published online in Nature's Scientific Reports. The results are also applicable in the scenario of our own sun developing extreme fluctuations and in a situation in which bacteria are subject to extreme artificial light sources in the laboratory. Light comes in packets of photons. [ Print | E-mail

Remote sensing Remote sensing is the acquisition of information about an object or phenomenon without making physical contact with the object and thus in contrast to in situ observation. In modern usage, the term generally refers to the use of aerial sensor technologies to detect and classify objects on Earth (both on the surface, and in the atmosphere and oceans) by means of propagated signals (e.g. electromagnetic radiation). It may be split into active remote sensing, when a signal is first emitted from aircraft or satellites)[1][2] or passive (e.g. sunlight) when information is merely recorded.[3] Overview[edit] Passive sensors detect natural radiation that is emitted or reflected by the object or surrounding areas. Reflected sunlight is the most common source of radiation measured by passive sensors. Illustration of Remote Sensing Remote sensing makes it possible to collect data on dangerous or inaccessible areas. Data acquisition techniques[edit] Applications of remote sensing data[edit]

Terraforming of Mars Artist's conception of the process of terraforming Mars. The terraforming of Mars is the hypothetical process by which Martian climate, surface, and known properties would be deliberately changed with the goal of making large areas of the environment more hospitable to human habitation, thus making human colonization much safer and more sustainable. The concept relies on the assumption that the environment of a planet can be altered through artificial means. In addition, the feasibility of creating a planetary biosphere on Mars is undetermined. There are several proposed methods, some of which present prohibitive economic and natural resource costs, and others that may be currently technologically achievable.[1] Motivation and ethics[edit] Future population growth and demand for resources may necessitate human colonization of objects other than Earth, such as Mars, the Moon, and nearby planets. In many respects, Mars is the most Earth-like of all the other planets in the Solar System.

Theoretical astronomy Based on strict dictionary definitions, "astronomy" refers to "the study of objects and matter outside the Earth's atmosphere and of their physical and chemical properties"[1] In some cases, as in the introduction of the introductory textbook The Physical Universe by Frank Shu, "astronomy" may be used to describe the qualitative study of the subject.[2] Astronomy focuses on celestial objects, space, and the physical universe as a whole. Observations of the Sun, Moon, stars, and planets have formed the basis of timekeeping and navigation. Astronomy is a branch of science, but unlike other sciences, which have Earth-based laboratories in which controlled experiments are performed, astronomy has its labs located in the heavens far beyond the reach, let alone control, of the terrestrial observer.[3] "So how can one be sure that what one sees out there is subject to the same rules and disciplines of science that govern the local laboratory experiments of physics and chemistry?" [edit]

Hunt for alien spacecraft begins, as planet-spotting scientist Geoff Marcy gets funding Artist rendering of alien spaceship Photo: Ray Edgar In the field of planet hunting, Geoff Marcy is a star. After all, the astronomer at the University of California at Berkeley found nearly three-quarters of the first 100 planets discovered outside our solar system. He's not kidding - and now he has the funding to do it. If intelligent life is common in the galaxy, "where is everybody?" Last fall, the Templeton Foundation, a philanthropic organisation dedicated to investigating what it calls the "big questions" - which, unsurprisingly, include "Are we alone?" What astronomer Geoff Marcy doesn't hope to find: A Death Star Photo: Wookieepedia As far as Marcy, an official NASA researcher for the Kepler mission, is concerned, that question has a clear answer: "The universe is simply too large for there not to be another intelligent civilisation out there. Advertisement "It's a heartbreaker," he says. Successful so far Kepler has been wildly successful in its four years. The concept is simple.