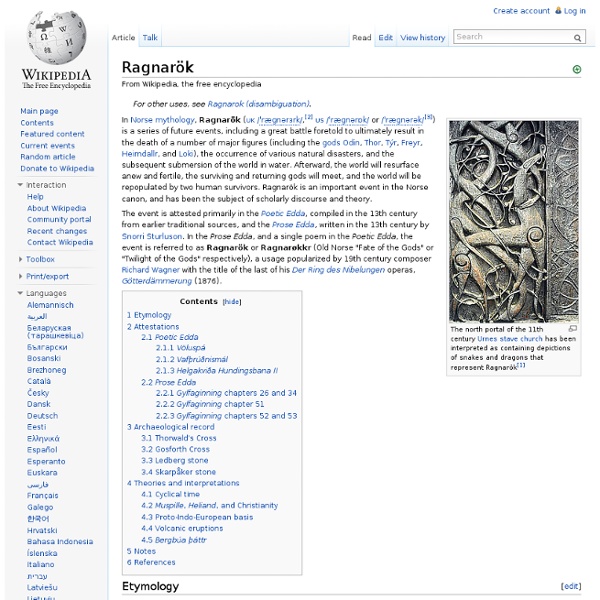 The north portal of the 11th century Urnes stave church has been interpreted as containing depictions of snakes and dragons that represent Ragnarök In Norse mythology, Ragnarök is a series of future events, including a great battle foretold to ultimately result in the death of a number of major figures (including the gods Odin, Thor, Týr, Freyr, Heimdallr, and Loki), the occurrence of various natural disasters, and the subsequent submersion of the world in water. Afterward, the world will resurface anew and fertile, the surviving and returning gods will meet, and the world will be repopulated by two human survivors. Ragnarök is an important event in the Norse canon, and has been the subject of scholarly discourse and theory. The event is attested primarily in the Poetic Edda, compiled in the 13th century from earlier traditional sources, and the Prose Edda, written in the 13th century by Snorri Sturluson. Mythology[edit] The Old Norse word "ragnarok" is a compound of two words.

Valhalla In Norse mythology, Valhalla (from Old Norse Valhöll "hall of the slain"[1]) is a majestic, enormous hall located in Asgard, ruled over by the god Odin. Chosen by Odin, half of those who die in combat travel to Valhalla upon death, led by valkyries, while the other half go to the goddess Freyja's field Fólkvangr. In Valhalla, the dead join the masses of those who have died in combat known as Einherjar, as well as various legendary Germanic heroes and kings, as they prepare to aid Odin during the events of Ragnarök. Before the hall stands the golden tree Glasir, and the hall's ceiling is thatched with golden shields. Valhalla is attested in the Poetic Edda, compiled in the 13th century from earlier traditional sources, the Prose Edda, written in the 13th century by Snorri Sturluson, Heimskringla, also written in the 13th century by Snorri Sturluson, and in stanzas of an anonymous 10th century poem commemorating the death of Eric Bloodaxe known as Eiríksmál as compiled in Fagrskinna.

Nemesis (mythology) In Greek mythology, Nemesis (Greek, Νέμεσις), also called Rhamnousia/Rhamnusia ("the goddess of Rhamnous") at her sanctuary at Rhamnous, north of Marathon, was the spirit of divine retribution against those who succumb to hubris (arrogance before the deities). Another name was Adrasteia, meaning "the inescapable. The name Nemesis is related to the Greek word νέμειν [némein], meaning "to give what is due".[2] Nemesis, Roman marble from Egypt, second century AD (Louvre) Nemesis has been described as the daughter of Oceanus or Zeus, but according to Hesiod she was a child of Erebus and Nyx. The word Nemesis originally meant the distributor of fortune, neither good nor bad, simply in due proportion to each according to what was deserved. In the Greek tragedies Nemesis appears chiefly as the avenger of crime and the punisher of hubris, and as such is akin to Atë and the Erinyes. A festival called Nemeseia (by some identified with the Genesia) was held at Athens.

Meditation How to meditate, and what this does for you. Meditation is a basic practice for self-realization. Basically, you sit straight and concentrate on a particular point in your body (usually the belly, or the breath). When you notice that your have drifted away from this point of concentration, you gently return to it. What it does for you This practice in a gradual way helps in lots of aspects of your life. How to meditate - the details Most people meditate for 15 - 30 minutes at a time, once or twice per day. It is best to focus on a point in the belly. You can focus on the upper part of the belly, on the movements of the breath. There is no need to focus on your meditation point to the exclusion of everything else. It is important to sit straight and relaxed, with a solid sense of stability. Depending on your sitting position, you can have your hands in your lap, or on your knees. You can either keep your eyes closed, or look at the floor 1.5 meter (5 feet) in front of you.

the Myths It is a universal truth that the myths of all cultures are the attempts of people to explain the world in which they live. So too, are the myths of ancient Egypt. Within the great epic myths are explained many smaller mysteries of life along the Nile. While enjoying the major epics, be sure to notice the explanations of the Egyptian universe within them. the Story of Re The story of the creation, Re's revenge of mankind and how Isis tricked Re into telling her his secret name. Isis and Osiris How Seth murdered Osiris and how Horus avenged his father. the Seven Year Famine The story of how Khnemu saved Egypt from the ravages of a seven year long famine. the Princess of Bekhten How the god of the moon, Khonsu saved the life of a princess during the 19th Dynasty. the Prince and the Sphinx The story of how a prince became king when he promised to do the famous Great Sphinx of Giza a favor (1405 BC)... the Doomed Prince The unfinished fable of a prince who is doomed to die. the Peasant and the Workman

The Solar Plexus Chakra – Manipura | Aware Awakening Quick Facts: Location: The solar plexus.Color: Yellow.Element: Fire.Planet: Mars.Sense: Sight.Glands: Pancreas.Mantra: RAM.Note: E. Body Parts: Liver, digestive system, stomach, spleen, gall bladder, autonomic nervous system, muscles and lower back. Scents: Bergamot, Grapefruit, Rosemary, Lemongrass. Traits: Personal power, self confidence, self esteem, willpower, courage, responsibility, spontanity. Crystals: Amber, Tiger’s Eye, Citrine, Pyrite. Affirmation: I accept myself completely, my personal power is growing stronger everyday, I can do whatever I choose to do. The Solar Plexus Chakra: The Solar Plexus Chakra (What is a chakra?) When in balance, you will be more responsible and reliable, your confidence and self esteem will be greater so you will also be able to meet challenges easier. When overcharged, you will feel a need to always be right or have the last word. With insufficient energy, you will have a weak willpower and become an easier target for manipulation. Namaste, ~ Alahi ~

Jörmungandr Sources[edit] The major sources for myths about Jörmungandr are the Prose Edda, the skaldic poem Húsdrápa, and the Eddic poems Hymiskviða and Völuspá. Less important sources include kennings in other skaldic poems. For example in Þórsdrápa, faðir lögseims, "father of the sea-thread", is used as a kenning for Loki. There are also image stones from ancient times depicting the story of Thor fishing for Jörmungandr. Stories[edit] There are three preserved myths detailing Thor's encounters with Jörmungandr: Lifting the cat[edit] Thor goes fishing for the Midgard Serpent in this picture from an 18th-century Icelandic manuscript. In one, Thor encounters the serpent in the form of a colossal cat, disguised by the magic of the giant king Útgarða-Loki, who challenges the god to lift the cat as a test of strength. Thor's fishing trip[edit] Another encounter comes when Thor goes fishing with the giant Hymir. The final battle[edit] See also[edit] Notes[edit] References[edit]

Oedipus In the most well-known version of the myth, Oedipus was born to King Laius and Queen Jocasta. Laius wished to thwart a prophecy, so left him to die on a mountainside. However, the baby was found by shepherds and raised by King Polybus and Queen Merope as their own. Oedipus learned from the oracle at Delphi of the prophecy that he would end up killing his father and marrying his mother but, unaware of his true parentage, believed he was fated to murder Polybus and marry Merope, so left for Thebes. Years later, to end a plague on Thebes, Oedipus searched to find who had killed Laius, and discovered that he himself was responsible. The legend of Oedipus has been retold in many versions, and was used by Sigmund Freud to name and give mythic precedent to the Oedipus complex. Basics of the myth[edit] After many years, Oedipus was told by a drunk that he was a "bastard", meaning at that time that he was not of the same blood to them. Events after the revelation depend on the source. Notes[edit]

Top 10 Strangest Things In Space Space Let’s be honest: space is an absolutely crazy place. Most science fiction writers throw in a planet with two stars that looks vaguely like Southern California, and call it a day. But the cosmos is a lot stranger than we give it credit for: Everyone knows that shooting stars are just meteors entering the atmosphere, right? When a binary star system is gobbled down by the supermassive black hole (that’s the scientific term, by the way) at the center of a galaxy, one of the two partners is consumed, while the other is ejected at high speed. Gliese 581 c wants to kill you. This planet orbits a red dwarf star, many times smaller than our Sun, with a luminosity of only 1.3% of our sun. The tidal locking of the planet alone results in some pretty odd features. Living on Gliese 581 c would have its challenges, though. As if one or two giant, fiery balls of gas weren’t enough, here we have the Castor System. Space Raspberries and Rum A Planet of Burning Ice Do you remember Gliese?

Valkyries, Wish-Maidens, and Swan-Maids Dear Viking Answer Lady: I am a high school coach for girls' sports. The school mascot is "the Vikings" and features a grim visaged male warrior. I'd like to have our women's sports teams be called "the Valkyries" but it occurs to me that I should find out more about the Valkyries before I do so. I'd appreciate any information you can give me on the topic. Also, if you have access to any images of Valkyries, that would be helpful as well in designing team jerseys and logos. (signed) Coaching Our Warrior Women Gentle Reader: The Valkyrie is, in the oldest strata of belief, a corpse goddess, represented by the carrion-eating raven. The Valkyrie is related to the Celtic warrior-goddess, the Morrigan, who likewise may assume the form of the raven. Erat namque eis uexillum miri portenti, quod licet credam posse esse incredibile lectori, tamen, quia uerum est, ueræ inseram lectioni. Weaving is an integral function of both the valkyrie and the Norn. Terms describing valkyries include: Sources