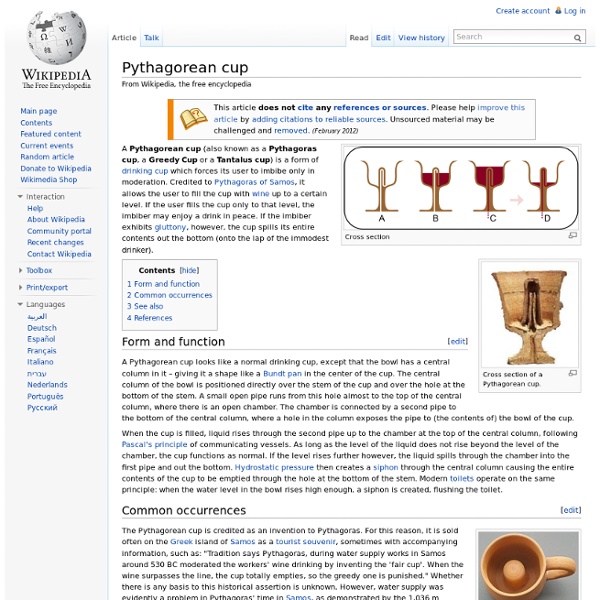 Cross section Cross section of a Pythagorean cup. A Pythagorean cup (also known as a Pythagoras cup, a Greedy Cup or a Tantalus cup) is a form of drinking cup that forces its user to imbibe only in moderation. Credited to Pythagoras of Samos, it allows the user to fill the cup with wine up to a certain level. If he fills the cup only to that level, the imbiber may enjoy a drink in peace. If he exhibits gluttony, however, the cup spills its entire contents out of the bottom (onto the lap of the immodest drinker).[1] Form and function[edit] A Pythagorean cup looks like a normal drinking cup, except that the bowl has a central column in it – giving it a shape like a Bundt pan in the center of the cup. When the cup is filled, liquid rises through the second pipe up to the chamber at the top of the central column, following Pascal's principle of communicating vessels. Common occurrences[edit] A Pythagorean cup sold in Crete A Pythagorean cup sold in Samos See also[edit] References[edit]

10 More Mysterious Conspiracy Theories Mysteries To date we have around seven conspiracy theory lists or lists containing entries related to such. This new list is a welcome addition as it has been some time since our last one and they are always extremely fascinating topics to read about. The world is full of conspiracy theories – many of which contain elements of mystery. This will definitely not be the last list of this type. Theories surrounding the Ararat Anomaly arose from a single black and white photograph taken in 1949 by a USAF recon plane performing routine intelligence gathering of the Ararat massif, which was in an area of military interest at the time.

Heron's fountain Heron's fountain is a hydraulic machine invented by the 1st century AD inventor, mathematician, and physicist Heron, also known as Hero of Alexandria. Heron studied the pressure of air and steam, described the first steam engine, and built toys that would spurt water, one of them known as Heron's fountain. Various versions of Heron's fountain are used today in physics classes as a demonstration of principles of hydraulics and pneumatics. Construction[edit] 93 Random Facts about Rome With nearly 3,000 years of rich history, Rome is often called the “Eternal City.” Though Rome dates back to possibly 625 B.C., the oldest continuously populated city in the world is widely to be considered Byblos in present-day Lebanon dating back to 5000 B.C.j Some linguistic possibilities for the origin of the word “Rome” include the Etruscan word rhome meaning “strength” or “river.” It may also be related to the root rum meaning “teat,” referring to the wolf that suckled the twins Romulus and Remus. Another theory is that Roma was the daughter of Aeneas, a mythical founder of Rome.j Because there were apparently few women in early Rome, Romulus (c. 771-717 B.C.) kidnapped neighboring Sabine women. -- Posted March 7, 2009

Elysium Elysium or the Elysian Fields (Ancient Greek: Ἠλύσιον πεδίον, Ēlýsion pedíon) is a conception of the afterlife that developed over time and was maintained by certain Greek religious and philosophical sects and cults. Initially separate from the realm of Hades, admission was reserved for mortals related to the gods and other heroes. Later, it expanded to include those chosen by the gods, the righteous, and the heroic, where they would remain after death, to live a blessed and happy life, and indulging in whatever employment they had enjoyed in life.[1][2][3][4][5][6] The ruler of Elysium varies from author to author: Pindar and Hesiod name Cronus as the ruler,[9] while the poet Homer in the Odyssey describes fair-haired Rhadamanthus dwelling there.[6][7][10][11]

Watch the Program Musical Minds PBS Airdate: June 30, 2009 NARRATOR: Some people have it, and others just don't... OLIVER SACKS (Author, Neurologist): This has been argued for two and a half centuries and will probably continue to be argued. NARRATOR: ...music on the brain. Kill Your Darlings There is nothing like the moment when you suddenly come upon the answer to a design problem. Whether it is a particular interaction or the perfect design element, it is a moment of pure elation. However, in that moment, there is a always a risk of an emotional attachment being formed. Essentially, we have the potential to surrender our ability to see beyond the “perfect solution” we have just created. Arthur Quiller-Couch, a British journalist, critic, and novelist once said,"Murder your darlings." While this quote was aimed at aspiring writers, I believe that it is equally relevant to designers.

Gladiators, 50 AD Gladiators, 50 AD The spectacle of gladiatorial combat was initiated by wealthy Romans over 250 years before the birth of Christ as a part of the ceremonies held to honor their deceased relatives. Later, these games became separate events sponsored by Rome's leading citizens in order to enhance their prestige. With the decline of the republic and the rise of the empire, gladiator games were appropriated by the emperor. The primary purpose of these life-or-death duels was to entertain the multitude of spectators that jammed the arena. free university lectures - computer science, mathematics, physics, chemistry Whether your goal is to earn a promotion, graduate at the top of your class, or just accelerate your life, lectures can help get you there. Our archives of lectures cover a huge range of topics and have all been handpicked and carefully designed by experienced instructors throughout the world who are dedicated to helping you take the next step toward meeting your career goals. Lifelong learns can turn their free time turn into self-improvement time. The online lectures on this list are more than lecture notes or a slideshow on a topic -- they were designed for audiences like you, with carefully sequenced themes and topics taught by veteran educators, and often with additional resources for your own independent study. The lectures are available to anybody, completely free of charge. Lecture courses are a valid and vital learning tool, and may be one of the best methods of learning available.

Life's Biggest Challenges In my over thirty years in clinical practice, I have run into many challenging problems and issues. These challenges included severe treatment-resistant depression, debilitating obsessive compulsive disorder, and extreme cases of borderline personality disorder among many others. In the vast majority of cases, most clients eventually manage to get much better. But the most vexing issue I have ever dealt with did not involve a diagnosis at all–in the usual sense.