Elementary-level Resources. List of rulers of China. Ancient China. Central Themes for a Unit on China. These recurrent "central themes" may be referred to repeatedly in the study of Chinese history, suggesting distinctive patterns to students, until a portrait of cultural difference is accumulated. 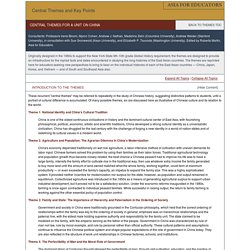 Confucius - Philosopher. Confucius was an influential Chinese philosopher, teacher and political figure known for his popular aphorisms and for his models of social interaction. 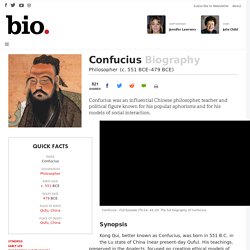 Synopsis Kong Qui, better known as Confucius, was born in 551 B.C. in the Lu state of China (near present-day Qufu). His teachings, preserved in the Analects, focused on creating ethical models of family and public interaction, and setting educational standards. He died in 479 B.C. Confucianism later became the official imperial philosophy of China, and was extremely influential during the Han, Tang and Song dynasties. Early Life Confucius, also known as Kong Qui or K’ung Fu-tzu, was born probably in 551 B.C. Philosophy and Teachings. 1000-1450 CE: China's Golden Age: The Song, the Mongols, and the Ming Voyages. This period of Chinese history, from roughly 600-1600 C.E., is a period of stunning development in China. 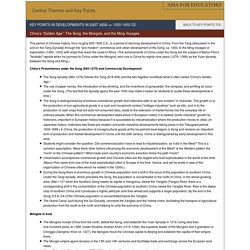 From the Tang (discussed in the unit on the Tang Dynasty) through the "pre-modern" commercial and urban development of the Song, ca. 1000, to the Ming voyages of exploration (1405- 1433) with ships that reach the coast of Africa. (The achievements of China under the Song are the subject of Marco Polo's "fantastic" reports when he journeys to China under the Mongols, who rule in China for eighty-nine years (1279- 1368) as the Yuan dynasty, between the Song and Ming.)

China's Preeminence under the Song (960-1279) and Commercial Development. 1450-1750: China: The Ming and the Qing. 1750-1919: China and the West: Imperialism, Opium, and Self-Strengthening (1800-1921) Ancient China for Kids and Teachers Index - Ancient China for Kids. What's in a Name? Chinese Rivers, Cities and Provinces. Mengzi.pdf. ‎www.ancientchina.co.uk/staff/resources/background/bg7/bg7pdf.pdf. 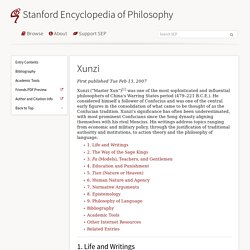 Life and Writings There is little to go on in constructing an account of Xunzi's life. The Xunzi itself includes few hints, and it is hard to reconcile later (Han dynasty) sources with one another. There is accordingly a great deal of scholarly disagreement about how to fill in the details of Xunzi's biography. What is relatively certain is that Xunzi was born in the northern state of Zhao towards the end of the 4th century B.C.E., that he flourished in the middle of the 3rd century, and that he died at an old age sometime after 238. Surviving sources mention two official posts held by Xunzi. 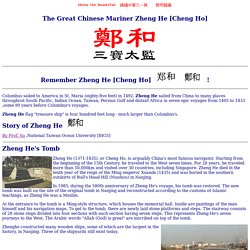 Starting from the beginning of the 15th Century, he traveled to the West seven times. For 28 years, he traveled more than 50,000km and visited over 30 countries, including Singapore. Chinese Inventions: Can You Name Them? From • Silk • Tea • Porcelain • Paper • Printing • Gunpowder • Compass • Alchemy [Chemistry] • Civil Service • Grain Storage • Other [plant life, political theory] Discussion Questions Related Link: Timeline of Chinese Inventions The Chinese knew how to produce silk at least by 1300 B.C., but not until the second century B.C. did it begin to be exported to Europe, and not until about 550 A.D., when monks who had traveled to China brought back silkworm eggs, did the West learn the Chinese secret of silk-making. 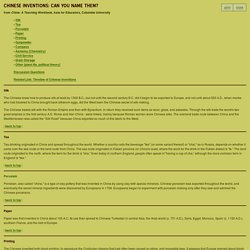 The Chinese traded silk with the Roman Empire and then with Byzantium. In return they received such items as wool, glass, and asbestos. Through the silk trade the world's two great empires in the first century A.D. . | back to top | Tea drinking originated in China and spread throughout the world. Porcelain, also called "china," is a type of clay pottery that was invented in China by using clay with special minerals.

Paper was first invented in China about 105 A.C. Henry A. Timeline of Chinese History and Dynasties. Chinese History - Common Core. From at least 1766BCE to the twentieth century of the Common Era, China was ruled by dynasties. 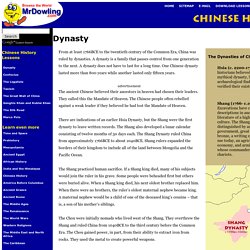 A dynasty is a family that passes control from one generation to the next. A dynasty does not have to last for a long time. One Chinese dynasty lasted more than 800 years while another lasted only fifteen years. advertisement The ancient Chinese believed their ancestors in heaven had chosen their leaders. There are indications of an earlier Hsia Dynasty, but the Shang were the first dynasty to leave written records. The Shang practiced human sacrifice. The Chou were initially nomads who lived west of the Shang. The Chou developed a feudal system in China. The Chou rulers taxed their subjects, but they used the wealth they collected to build huge walls to defend their cities from nomadic warriors.

Advertisement. China. The Peculiar History of Foot Binding in China. Wikimedia Commons For around ten centuries, successive generations of Chinese women endured a practice when, as children, their feet were systematically broken and shaped in such a way that they resembled hooves. 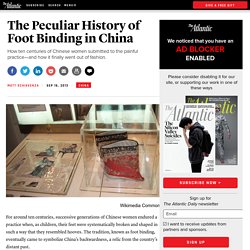 The tradition, known as foot binding, eventually came to symbolize China's backwardness, a relic from the country's distant past. But despite the efforts of reformists, foot binding persisted well into the 20th century. In the January 1923 issue of The Atlantic, Pearl Buck (whose book The Good Earth is one of the most influential ever written about China) described meeting a young woman who had recently decided to unbind her feet in accordance with the latest fashion: Yesterday she came in a delicate blue satin of a more fashionable cut than I had ever seen; her feet were unbound and in little clumping, square, black-leather foreign shoes.

What exactly are bound feet, and why did they become such an enduring part of the Chinese world? At what age did girls get their feet bound? Home. Introduction Endangered System of Women's Writing from Hunan, China Recent Research Findings from Jiangyong Prefecture , China Matriarchal Society of Moso , China Singing of Kangrige Anti-Japanese Song Some Nushu Collection Worldwide Researchers in Socio- linguistics & Chinese Literature Introdution to New Book“女文字研究 The Report on Present Situation of Nushu 女書and Its International Symposium Held in China Report on Symposium on Nushu. 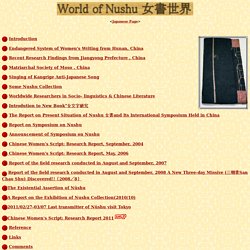 China's secret 'women only' language. A decade ago Chinese-American author Lisa See was researching an article on footbinding when she found a reference to Nushu, the world's only "women's writing". 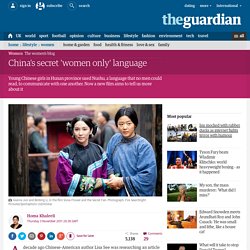 Though the origins were murky, the script revealed a culture of women's relationships and sparked the idea for her novel, Snow Flower and the Secret Fan, the film of which, co-produced by Rupert Murdoch's wife Wendi Deng, is released tomorrow. After having their feet bound at around the age of seven, girls in Jiangyong County in Hunan province would live indoors – first in the "women's chamber" of their own homes, and later in the homes of their husband's family.

To ease their isolation and offer support in their pain, girls from the same village were brought together as "sworn sisters" until their weddings. Women used Nushu – a script unique to the area – to write to their laotongs after they "married out" into different villages. Chinese Dynasties - Chinese & World Chronology.