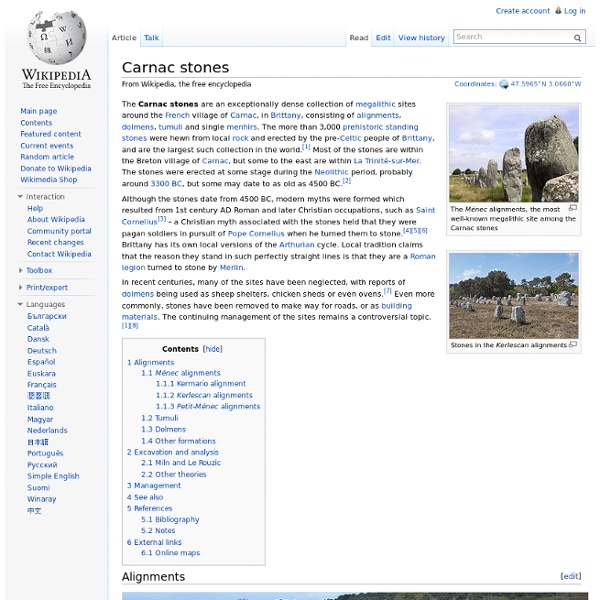 The Ménec alignments, the most well-known megalithic site among the Carnac stones Stones in the Kerlescan alignments Although the stones date from 4500 BC, modern myths were formed which resulted from 1st century AD Roman and later Christian occupations, such as Saint Cornelius[3] – a Christian myth associated with the stones held that they were pagan soldiers in pursuit of Pope Cornelius when he turned them to stone.[4][5][6] Brittany has its own local versions of the Arthurian cycle. Local tradition claims that the reason they stand in such perfectly straight lines is that they are a Roman legion turned to stone by Merlin. In recent centuries, many of the sites have been neglected, with reports of dolmens being used as sheep shelters, chicken sheds or even ovens.[7] Even more commonly, stones have been removed to make way for roads, or as building materials. Alignments[edit] Model of the Ménec alignment Ménec alignments[edit] Stones in the Ménec alignment Kermario alignment[edit] Moustoir Related:  Lugares geográficos

Göbekli Tepe Neolithic archaeological site in Turkey First noted in a survey in 1963, the importance of the site was recognised by Schmidt, who directed excavations there from 1995 until his death in 2014. Since then, work has continued under the auspices of Istanbul University, Şanlıurfa Museum, and the German Archaeological Institute, under the overall direction of Turkish prehistorian Necmi Karul. It was designated a UNESCO World Heritage Site in 2018, recognising its outstanding universal value as "one of the first manifestations of human-made monumental architecture".[5] As of 2021[update], less than 5% of the site has been excavated.[6] Background Göbekli Tepe was built and occupied during the Pre-Pottery Neolithic (PPN)—the earliest division of the Neolithic period in Southwest Asia—which is dated to between 9600 and 7000 BCE. Known PPN sites in the Urfa region. PPN villages consisted of clusters of stone or mud brick houses, and sometimes substantial monumental or 'communal' buildings. fill Art

Coral Castle Coral Castle is an oolite limestone structure created by the Latvian-American eccentric Edward Leedskalnin (1887–1951). It is located in unincorporated territory of Miami-Dade County, Florida, between the cities of Homestead and Leisure City. The structure comprises numerous megalithic stones, mostly limestone formed from coral, each weighing several tons.[2] It is currently a privately operated tourist attraction. Coral Castle is noted for legends surrounding its creation that claim it was built single-handedly by Leedskalnin using reverse magnetism or supernatural abilities to move and carve numerous stones weighing many tons.[3][4] History[edit] Coral Castle's own promotional material says Edward Leedskalnin was suddenly rejected by his 16-year-old fiancée Agnes Skuvst in Latvia, just one day before the wedding. Edward spent more than 28 years building Coral Castle, refusing to allow anyone to view him while he worked. The Castle[edit] A view from within Leedskalnin's Coral Castle.

Nan Madol Ruined city in Federated States of Micronesesia Nan Madol is an archaeological site adjacent to the eastern shore of the island of Pohnpei, now part of the Madolenihmw district of Pohnpei state in the Federated States of Micronesia in the western Pacific Ocean. Nan Madol was the capital of the Saudeleur Dynasty until about 1628.[3][note 1] The city, constructed in a lagoon, consists of a series of small artificial islands linked by a network of canals.[3] The site core with its stone walls encloses an area approximately 1.5 km long by 0.5 km wide and it contains nearly 100 artificial islets—stone and coral fill platforms—bordered by tidal canals. History[edit] Nan Madol was the ceremonial and political seat of the Saudeleur Dynasty, which united Pohnpei's estimated 25,000 people until about 1628.[3] Set apart between the main island of Pohnpei and Temwen Island, it was a scene of human activity as early as the first or second century AD. Purpose and features[edit] Food and water[edit]

Baalbek City in Baalbek-Hermel, Lebanon Baalbek (/ˈbɑːlbɛk/),[1] properly Baʿalbek (Arabic: بعلبك‎, romanized: Ba’labakk, Syriac-Aramaic: ܒܥܠܒܟ) and also known as Balbec, Baalbec or Baalbeck,[5] is a city located east of the Litani River in Lebanon's Beqaa Valley, about 85 km (53 mi) northeast of Beirut. It is the capital of Baalbek-Hermel Governorate.[6] In Greek and Roman times Baalbek was also known as Heliopolis. In 1998 Baalbek had a population of 82,608, mostly Shia Muslims, followed by Sunni Muslims and Christians.[7] It is home to the Baalbek temple complex which includes two of the largest and grandest Roman temple ruins: the Temple of Bacchus and the Temple of Jupiter. Name[edit] An installation displaying "I ♥ Baalbeck" The etymology of Baalbek has been debated indecisively since the 18th century. History[edit] Prehistory[edit] Antiquity[edit] A proposed reconstruction of the temple complex at Baalbek under the Romans Roman Heliopolis and its surroundings in the 2nd and 3rd centuries.

Giants' grave Aerial view of the Giant's grave of Sa Domu 'e S'Orcu in Siddi. Giants' tomb (Italian: Tomba dei giganti, Sardinian: Tumba de zigantes / gigantis) is the name given by local people and archaeologists to a type of Sardinian megalithic gallery grave built during the Bronze Age by the Nuragic civilization. They were collective tombs and can be found throughout Sardinia, with 800 being discovered there.[1] A stone cairn lies over the burial chambers, with some examples having a cup-shaped entrance similar to the court cairn tombs of Ireland. Types[edit] There are two general types of giants' tomb. In the more primitive slab-type giants tombs, the central slab is unmodified aside from the entrance that is cut through it at the base, or else there is a crude dolmen-like arrangement of 3 uncut rocks to form the entrance (Osono, Sortali, Lolghi, Pescaredda). The sepulchres have a characteristic rectangular plan with an apse. Geographical distribution of the Giant tombs in Sardinia See also[edit]

Nuku Hiva Nuku Hiva (sometimes spelled "Nukahiva") is the largest of the Marquesas Islands in French Polynesia, and is therefore an overseas country of France in the Pacific Ocean. It was formerly also known as Île Marchand and Madison Island. Herman Melville wrote his book Typee based on his experiences in the Taipivai valley in the eastern part of Nuku Hiva. Robert Louis Stevenson's first landfall on his voyage on the Casco was at Hatihe'u, on the north side of the island, in 1888. Geography[edit] Coast[edit] Inland[edit] The central part of the island is a high plateau called To'ovi'i, covered primarily by a tall-grass prairie, on which experiments in cattle raising are taking place for the first time — 15 years ago all the cattle were feral and hunted with rifles. On the western edge of To'ovi'i rises Tekao, the island's highest peak, which reaches an elevation of 1224 m (4,016 ft). Administration[edit] Demographics[edit] The population in 2007 was 2,660. Life[edit] Transportation[edit] History[edit]

Oxkintok Map of NW Yucatán, showing major ecological zones and the location of Oxkintok Tzat Tun Tzat or "ancient labyrinth". There is no evidence of warfare, or famine to cause the abandonment of Oxkintok. Nor is there evidence for occupation after it had been abandoned around 1500 CE. This date of abandonment has been interpreted by the disappearance of pottery production at the site. Research at this site is ongoing along with the interpretation of previously collected data. Geography and climate[edit] The site of Oxkintok is located on the northwestern tip of the Yucatán Peninsula, and is situated uncharacteristically (for the region) near two other sites. The Yucatán is an extensive, limestone rich plains region that is dominated by karst topography and geology. Etymology History of research[edit] The site of Oxkintok was first described in the 16th century by Brother Antonio de Ciudad Real, who noted the proximity of the site to the Puuc mountain range and the large ruined structures. Satunsat

Gunung Padang Megalithic Site Gunung Padang is a megalithic site located in Karyamukti village, Cianjur regency, West Java Province of Indonesia, 30 km southwest of the city of Cianjur or 6 kilometers from Lampegan station. It has been called the largest megalithic site in all of Southeastern Asia, and has produced controversial carbon dating results which, if confirmed, suggest that construction began as far back as 20,000 B.C.[1] A 2014 report suggest that the site might have been built sometime between the 2nd and 6th centuries AD.[2] History[edit] The existence of the site was mentioned in Rapporten van de Oudheidkundige Dienst (ROD, "Report of the Department of Antiquities") in 1914. Located at 885 metres above sea level, the site covers a hill in a series of terraces bordered by retaining walls of stone that are accessed by about 400 successive andesite steps rising about 95 metres. The villages closest to the site are Cimanggu, Ciwangun and Cipanggulakan. 2012 survey[edit] Criticism[edit] References[edit]