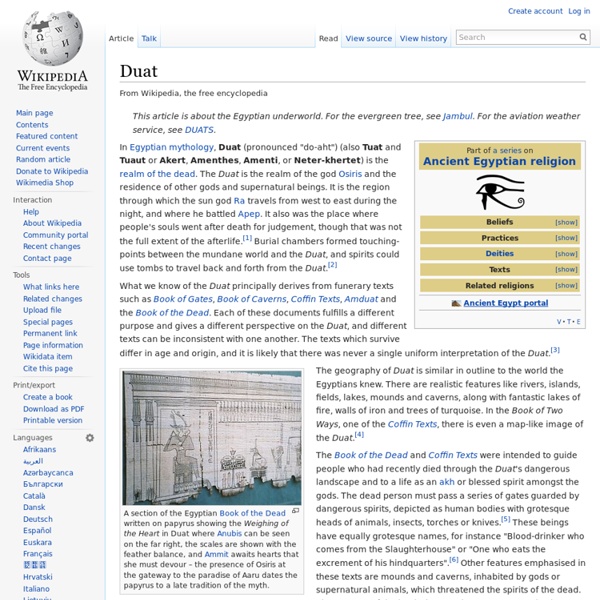 This article is about the Egyptian underworld. For the evergreen tree, see Jambul. For the aviation weather service, see DUATS. In Egyptian mythology, Duat (pronounced "do-aht") (also Tuat and Tuaut or Akert, Amenthes, Amenti, or Neter-khertet) is the realm of the dead. The Duat is the realm of the god Osiris and the residence of other gods and supernatural beings. It is the region through which the sun god Ra travels from west to east during the night, and where he battled Apep. What we know of the Duat principally derives from funerary texts such as Book of Gates, Book of Caverns, Coffin Texts, Amduat and the Book of the Dead. A section of the Egyptian Book of the Dead written on papyrus showing the Weighing of the Heart in Duat where Anubis can be seen on the far right, the scales are shown with the feather balance, and Ammit awaits hearts that she must devour – the presence of Osiris at the gateway to the paradise of Aaru dates the papyrus to a late tradition of the myth. References

Serapis Serapis (Σέραπις, Attic/Ionian Greek) or Sarapis (Σάραπις, Doric Greek) is a Graeco-Egyptian god. Cult of Serapis was introduced during the 3rd century BC on the orders of Ptolemy I of Egypt[1] as a means to unify the Greeks and Egyptians in his realm. The god was depicted as Greek in appearance, but with Egyptian trappings, and combined iconography from a great many cults, signifying both abundance and resurrection. A serapeum (Greek serapeion) was any temple or religious precinct devoted to Serapis. The cultus of Serapis was spread as a matter of deliberate policy by the Ptolemaic kings, who also built an immense Serapeum in Alexandria. Serapis continued to increase in popularity during the Roman period, often replacing Osiris as the consort of Isis in temples outside Egypt. About the god[edit] "Serapis" is the only form used in Latin,[4] but both Σάραπις, Sárapis and Σέραπις, Sérapis appear in Greek, as well as Σαραπo Sarapo in Bactrian. History[edit] With his (i.e. Gallery[edit]

60 Awesome Search Engines for Serious Writers June 20th, 2010 Finding the information you need as a writer shouldn’t be a chore. Luckily, there are plenty of search engines out there that are designed to help you at any stage of the process, from coming up with great ideas to finding a publisher to get your work into print. Professional Find other writers, publishers and ways to market your work through these searchable databases and search engines. Writing These helpful tools will help you along in the writing process. WriteSearch: This search engine focuses exclusively on sites devoted to reading and writing to deliver its results.The Burry Man Writers Center: Find a wealth of writing resources on this searchable site.Writing.com: This fully-featured site makes it possible to find information both fun and serious about the craft of writing.Purdue OWL: Need a little instruction on your writing? Research Try out these tools to get your writing research done in a snap. Reference Need to look up a quote or a fact? Niche Writers Books Blogging

The Egyptian Afterlife and The Feather of Truth (Article) Is it possible to have a heart that is lighter than a feather? To the ancient Egyptians it was not only possible but highly desirable. The after-life of the ancient Egyptians was known as the Field of Reeds and was a land very much like one's life on earth save that there was no sickness, no disappointment and, of course, no death. The Hall of Truth In The Egyptian Book of the Dead it is recorded that the soul would be lead before the god Osiris and recite the forty-two negative confessions beginning with the prayer, "I have not learnt the things which are not" meaning that the soul strove in life to devote itself to matters of lasting importance rather than the trivial matters of everyday life. The Judgement of Osiris The `heart' of the soul was handed over to Osiris who placed it on a great golden scale balanced against the white feather of Ma'at, the feather of truth, of harmony, on the other side. The Field Of Reeds and Egyptian Love of Life Contributor's Note:

Martin Take Down Recurve Bow - Product Reviews and Prices - Shopping Have hot Bow, will travel! Martin Jaguar Take - down Recurve Bow. This Bow is performance ready, lightweight and breaks down to travel in a pack or anywhere! A classical right-hand Recurve Bow with tremendous feel and accuracy. Amun "Amen Ra" redirects here. For the Belgian band, see Amenra. Amun (also Amon (/ˈɑːmən/), Amen; Ancient Greek: Ἄμμων Ámmōn, Ἅμμων Hámmōn) was a major Egyptian deity. He was attested since the Old Kingdom together with his spouse Amaunet. With the 11th dynasty (c. 21st century BC), he rose to the position of patron deity of Thebes by replacing Monthu.[1] After the rebellion of Thebes against the Hyksos and with the rule of Ahmose I, Amun acquired national importance, expressed in his fusion with the Sun god, Ra, as Amun-Ra. Early history Amun rose to the position of tutelary deity of Thebes after the end of the First Intermediate Period, under the 11th dynasty. Temple at Karnak The history of Amun as the patron god of Thebes begins in the 20th century BC, with the construction of the Precinct of Amun-Re at Karnak under Senusret I. Major construction work in the Precinct of Amun-Re took place during the 18th dynasty when Thebes became the capital of the unified Ancient Egypt. New Kingdom Decline

Osireion The Osireion at the rear of the temple of Seti I at Abydos, the underground entry to the Osireion is at the top of the picture, see image below The Osirion or Osireon is located at Abydos at the rear of the temple of Seti I. It is an integral part of Seti I's funeral complex and is built to resemble an 18th Dynasty Valley of the Kings tomb.[1] It was discovered by archaeologists Flinders Petrie and Margaret Murray who were excavating the site in 1902-3. The Osirion was originally built at a considerably lower level than the foundations of the temple of Seti, who ruled from 1294 - 1279 BC.[2] While there is disagreement as to its true age, despite the fact that it is situated at a lower depth than the structures nearby, that it features a very different architectural approach, and that it is frequently flooded with water which would have made carving it impossible had the water level been the same at the time of construction, Peter Brand says it "can be dated confidently to Seti's reign.

ka NOVA | The Afterlife in Ancient Egypt share Posted 01.03.06 NOVA Unlike most scholars of the ancient world, Salima Ikram knows her subjects on an intimate, face-to-face basis. In this interview, Ikram, an Egyptologist at the American University in Cairo, sheds light on why mummification was practiced in ancient Egypt, what the ancients thought the afterlife would be like, and why—of some 70 million mummies made—very few remain intact today. Like most ancient Egyptians, this wife of a pharaoh died young. The allure of mummies NOVA: Why do you think people are so fascinated by mummies? Salima Ikram: Part of it is, of course, all that horror movie business. What's the allure of mummies for Egyptologists? Well, I think one reason is very basic: here we are, studying Tuthmosis III, reading his words on temple walls, and you can actually look at him! There's also a lot that we can learn from mummies about ancient disease, medical practices, technology, health, diet, as well as religious beliefs. No. Did they bury pets in their tombs?