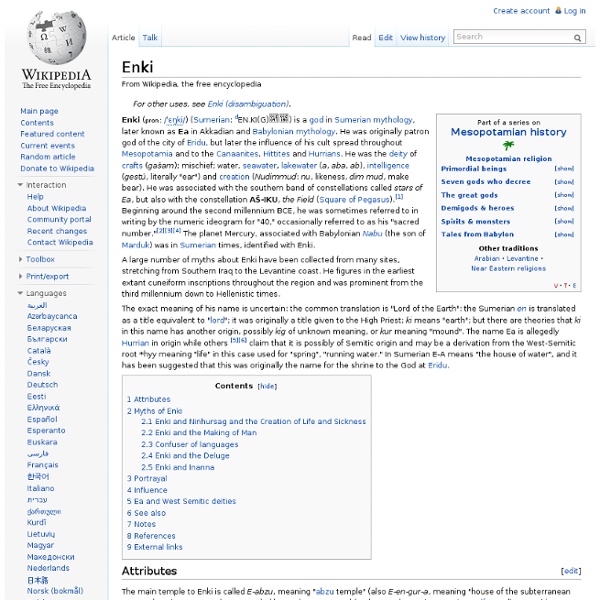 Anu - www.GatewaysToBabylon.com The name of the Mesopotamian Skyfather and Lord of Firmament, or the Great Above, is written with the sign that means heaven. It also stands for the determinative of divinity in Sumerian, Akkadian, and Hittite. In Babylon, He is called Anu. According to the Southern Creation Myth, or the Eridu Model, He (the Firmament) and Ki came into being out of Nammu, the Sea, the Primeval Mother of all for the Sumerians. Ki, the Earth, was his sister-beloved since the time of conception, when they lay in each other´s arms within Mother Nammu. Later, when Heaven and Earth were separated by Enlil, the young Air God, Ki´s and Anu´s firsborn, from the Heights Above where He found his sacred space, Anu came down to Ki (the Living Earth) to make life grow. Anu is therefore Lord of Creation, whose main symbol, the horned crown, is also the symbol of the king and the high priest, or Supreme Authority over all realms. The antiquity of An as a divine personality is subject to controversy.

Enlil Enlil with his wife, Ninlil Origins[edit] Enlil was known as the inventor of the mattock (a key agricultural pick, hoe, ax or digging tool of the Sumerians) and helped plants to grow.[5] Cosmological role[edit] Enlil, along with Anu/An, Enki and Ninhursag were gods of the Sumerians.[6] Cultural histories[edit] Enlil is associated with the ancient city of Nippur, sometimes referred to as the cult city of Enlil.[7] His temple was named Ekur, "House of the Mountain At a very early period prior to 3000 BC, Nippur had become the centre of a political district of considerable extent. His chief temple at Nippur was known as Ekur, signifying 'House of the mountain'. Grouped around the main sanctuary, there arose temples and chapels to the gods and goddesses who formed his court, so that Ekur became the name for an entire sacred precinct in the city of Nippur. See also[edit] References[edit] External links[edit]

Sumerian King List The Sumerian King List is an ancient manuscript originally recorded in the Sumerian language, listing kings of Sumer (ancient southern Iraq) from Sumerian and neighboring dynasties, their supposed reign lengths, and the locations of "official" kingship. Kingship was believed to have been handed down by the gods, and could be transferred from one city to another, reflecting perceived hegemony in the region.[1] Throughout its Bronze Age existence, the document evolved into a political tool. Its final and single attested version, dating to the Middle Bronze Age, aimed to legitimize Isin's claims to hegemony when Isin was vying for dominance with Larsa and other neighboring city-states in southern Mesopotamia.[1][2] Composition[edit] Sources[edit] The following extant ancient sources contain the Sumerian King List, or fragments: The first two sources (WB) are a part of the "Weld-Blundell collection", donated by Herbert Weld Blundell to the Ashmolean Museum. The list[edit] Dynasty of Awan[edit]

History of Sumer The history of Sumer, taken to include the prehistoric Ubaid and Uruk periods, spans the 5th to 3rd millennia BC, ending with the downfall of the Third Dynasty of Ur around 2004 BC, followed by a transitional period of Amorite states before the rise of Babylonia in the 18th century BC. The first settlement in southern Mesopotamia was Eridu. The Sumerians claimed that their civilization had been brought, fully formed, to the city of Eridu by their god Enki or by his advisor (or Abgallu from ab=water, gal=big, lu=man), Adapa U-an (the Oannes of Berossus). The Sumerian king list is an ancient text in the Sumerian language listing kings of Sumer, including a few foreign dynasties. Timeline[edit] Dates are approximate, consult particular article for details Uruk III = Jemdet Nasr period[2] Earliest city-states[edit] Permanent year-round urban settlement may have been prompted by intensive agricultural practices. Relative stratigraphy chronology Pre-dynastic period[edit] Early Dynastic period[edit]

Paranormal, UFOs, Cryptids and Unexplained Phenomena Arguments can be made that the evidence for ancient astronauts comes from supposed gaps in historical and archaeological records, and they also maintain that absent or incomplete explanations of historical or archaeological data point to the existence of ancient astronauts. The evidence is said to include archaeological artifacts that are beyond the presumed technical capabilities of the historical cultures with which they are associated. This also includes artwork and legends that are interpreted as depicting extraterrestrial contact or technologies. Notwithstanding these contentions, let us say that there is an axiom to the ancient astronaut theory. Then we need to ask, who were these beings? What did they represent to the inhabitants of earth? I would like to periodically chronicle my speculation of how the native people interpreted these unknown entities. Anu possesses vast powers of an unknown nature, which seem to surpass the powers of any other Mesopotamian god.