Legendary Times - Come Search with Us 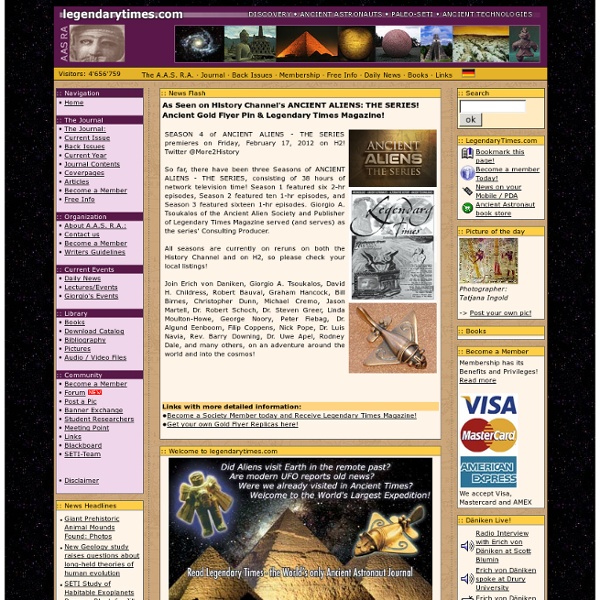 Giorgio A. Tsoukalos Giorgio on Facebook! Follow Giorgio on Twitter! Gold Flyer Pin as worn by Giorgio! Giorgio A. For over 14 years, Giorgio A. As the world's leading Ancient Astronaut expert, Giorgio has starred in and appeared on The History Channel, the Travel Channel, the National Geographic Channel, the Sci-Fi Channel, Coast to Coast AM, and many other international television and radio programs such as UFO HUNTERS and ANCIENT ALIENS reporting about the latest discoveries in the Ancient Astronaut field. In 2010, Tsoukalos starred in and was the Consulting Producer for The History Channel's wildly successful ANCIENT ALIENS: THE SERIES which was produced by Prometheus Entertainment. Tsoukalos has traveled the world extensively (54 countries ...and counting). The A.A.S. Giorgio A. Tsoukalos' scientific study of the Ancient Astronaut Theory includes the detailed analysis of ancient scriptures, ancient drawings, and mysterious archaeological monuments and artifacts. Giorgio A. Fax ++1 (760) 941-9150

The Official Website of Robert Bauval - Home Page UFO Evidence : David Jacobs, Ph.D. David M. Jacobs, Ph.D. is Associate Professor of History at Temple University specializing in twentieth century American history and culture. Dr. articles & documents Abductees Speak: Memoirs of Shadows - by Laura David M. From my earliest memory I knew beyond a doubt that my life was different than other children's lives. FAQ's about alien abductions David M. Dr. Interview with David Jacobs On "The Threat" UFO Journalist Sean Casteel Finding what he believes to be the answers was not a happy event for Jacobs. Q. Sean Casteel Temple University professor David Jacobs, Ph.D., the author of the highly regarded books "The UFO Controversy In America" and "Secret Life," has spent more than 30 years researching UFOs and alien abduction. Straight Talk About UFO Abductions: A Typical Abduction Event Abductions are complex series of events and procedures directed by the abductors to passive or controlled abductees. The Threat, by David Jacobs - Excerpts David M. websites & organizations books

Acoustic levitation Acoustic levitation (also: Acoustophoresis) is a method for suspending matter in a medium by using acoustic radiation pressure from intense sound waves in the medium. Acoustic levitation is possible because of the non-linear effects of intense sound waves.[1] Some methods can levitate objects without creating sound heard by the human ear such as the one demonstrated at Otsuka Lab,[2] while others produce some audible sound. There are many ways of creating this effect, from creating a wave underneath the object and reflecting it back to its source, to using an acrylic glass tank to create a large acoustic field. Acoustic levitation is usually used for containerless processing which has become more important of late due to the small size and resistance of microchips and other such things in industry. Containerless processing may also be used for applications requiring very-high-purity materials or chemical reactions too rigorous to happen in a container. See also[edit] References[edit]

The Mayan Database Return to top of page Welcome to MED The Mayan Epigraphic Database Project (MED) is an experiment in networked scholarship with the purpose of enhancing Classic Mayan epigraphic research. At present, MED consists of a relational database of glyphs ("gnumbers"), images, phonetic values ("pvalues"), and semantic values ("svalues") according to the consensus among various American Mayanists (MacLeod and Reents-Budet 1994). Server space for MED is provided by the Institute for Advanced Technology in the Humanities (IATH) at the University of Virginia, and the Multimedia Engineering Computation Atelier (MECA) at Princeton. What's New as of 12.14.2001 12.14.2001: The Guestbook has been removed. 03.15.99: The frames-based glyph catalog is running again. 10.05.98: The beta version of my new calendar conversion program can be accessed here. 04.29.98: The interactive glyph catalog will be down for a day or two, as I will be upgrading the server. 8.30.97: A note about Linda Schele. The Glyph Catalog

Extraterrestrial Contact - Scientific Study of the UFO Phenomenon How Acoustic Levitation Works" Unless you travel into the vacuum of space, sound is all around you every day. But most of the time, you probably don't think of it as a physical presence. You hear sounds; you don't touch them. The only exceptions may be loud nightclubs, cars with window-rattling speakers and ultrasound machines that pulverize kidney stones. The idea that something so intangible can lift objects can seem unbelievable, but it's a real phenomenon. To understand how acoustic levitation works, you first need to know a little about gravity, air and sound. Second, air is a fluid that behaves essentially the same way liquids do. Third, sound is a vibration that travels through a medium, like a gas, a liquid or a solid object. The sound wave travels as the moving molecules push and pull the molecules around them. Click the arrow to move on to the next slide. Acoustic levitation uses sound traveling through a fluid -- usually a gas -- to balance the force of gravity.

Mike Bara DIA Conspiracies Take Off - - News "Have you ever been through the Denver airport? It's strange. It's one of the busiest, but I'm telling you, it's weird. There's a firestorm of people talking about this thing." Especially on June 11, when George Noory devotes all four hours of Coast to Coast, his nationally syndicated talk-radio program dedicated to the "paranormal, extraterrestrial and other topics typically overlooked by more mainstream media outlets," to a discussion of Denver International Airport. More DIA Conspiracy Stories: - DIA Conspiracy Makes List of World's Weirdest - Best DIA Conspiracy Video Ever! Jim J. Skeptics read unnatural things into Leo Tanguma's "In Peace and Harmony With Nature." Artist Leo Tanguma doesn't understand how conspiracy theorists find hidden messages in his mural on environmentalism. The capstone in the Great Hall at DIA contains a time capsule — and lots of symbolism. Location Info Details To see videos produced by DIA conspiracy theorists, click here. Related Stories More About