Evidence for God from Science 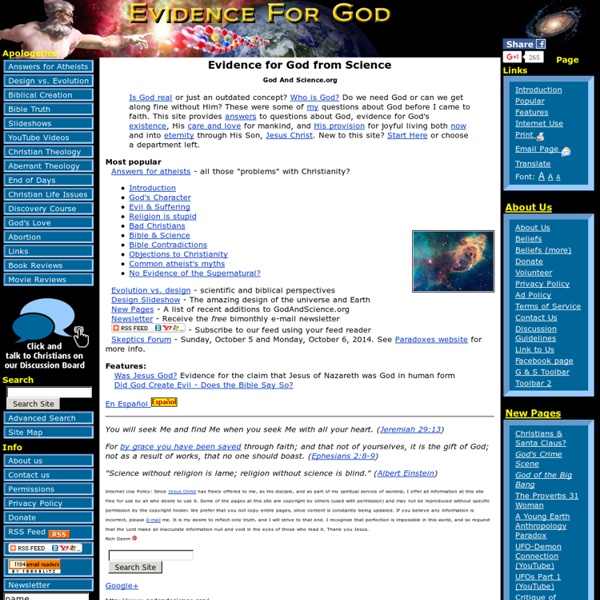 Is God real or just an outdated concept? Who is God? Do we need God or can we get along fine without Him? These were some of my questions about God before I came to faith. This site provides answers to questions about God, evidence for God's existence, His care and love for mankind, and His provision for joyful living both now and into eternity through His Son, Jesus Christ. New to this site?

This Year’s Finest Conjunction: Venus and Jupiter Two brightest planets Venus and Jupiter come as close as a third of a degree apart as seen from North America. It will be easy to spot them in the western sky as no other celestial body will outshine the beautiful tandem when the sun and the moon are down. “To the eye they’ll look like a double star,” said Kelly Beatty, a senior editor at Sky & Telescope magazine. “Anyone who hasn’t glanced at the evening sky for a while will be surprised by how dramatically tight the pairing is.” The closest conjunction will happen on June 30th and July 1st, 2015.

9 Key Components of the Shift to Higher Consciousness This article originally appeared in WakingTimes.com. Facing considerable political, economic, social and ecological crises, the human race is desperate for a transformation and a new direction. Business as usual ensures that we are doomed to run a course of half-conscious self-destruction, as man-made catastrophes multiply and stress mounts in every aspect of life. We must overthrow our ignorance, as it has become a fearful master, goading us into war, pollution, waste and exploitation. The social problems and entrenched patterns at the source of global issues are too vast and complex to be solved at the personal level, yet, paradoxically, the personal transformation of the individual offers a lonesome opportunity to avert the catastrophes we are engineering for ourselves. The shift.

How the Passover Reveals Jesus Christ Introduction The festival of the Passover has been celebrated by Jews for thousands of years. Passover symbolism Much of the symbolism of Jesus' last Passover week is lost to us because we are unaware of the customs of the time. For example, Jesus came into the city of Jerusalem five days before the lamb was killed in the temple as the Passover sacrifice for the sins of the people of Israel. Five days before the lamb was to be sacrificed, it was chosen. Arabic phrasebook The following phrasebook deals mostly with Modern Standard Arabic. See the Lebanese Arabic phrasebook, Jordanian Arabic phrasebook or the Egyptian Arabic phrasebook for Arabic dialects relating to those regions/countries. Arabic is the fourth most widely-spoken language in the world and is one of the six official languages of the United Nations. It is spoken in many popular destinations in North Africa and the Middle East.

About This page includes information about the aims and scope of BMC Bioinformatics, editorial policies, open access and article-processing charges, the peer review process and other information. For details of how to prepare and submit a manuscript through the online submission system, please see the instructions for authors. Scope The origins of abc Where does our alphabet come from? We see it every day on signs, billboards, packaging, in books and magazines; in fact, you are looking at it now — the Latin or Roman alphabet, the world’s most prolific, most widespread abc. Typography is a relatively recent invention, but to unearth the origins of alphabets, we will need to travel much farther back in time, to an era contemporaneous with the emergence of (agricultural) civilisation itself. Robert Bringhurst wrote that writing is the solid form of language, the precipitate.[1] But writing is also much more than that, and its origins, its evolution, and the way it is now woven into the fabric of civilisations makes it a truly wonderful story.

The Multidimensional Human There is evidence to suggest that other worlds or dimensions exist just beyond the range of our normal perception, but we remain unaware of them because our minds are not objectively conscious at these higher levels. Our normal level of consciousness is restricted in some way, preventing us from tuning in to these subtler realms. If you have young children you might have noticed them looking a things that don't appear to be there or talking to "imaginary friends". Very young children can actually see into these hidden worlds, but they lose the ability as they grow older. In altered states of consciousness the censorship of the physical mind ceases. First 3D Map of the Brain’s Connections We knew anatomy could be gorgeous, but this is beyond anything else we’ve ever seen, and it’s guaranteed to be something you haven’t seen, being the first 3D image of a brain’s connections. Van Wedeen, a Harvard radiology professor, is awestruck: “We’ve never really seen the brain – it’s been hiding in plain sight.” Conventional scanning has offered us a crude glimpse, but scientists such as Wedeen aim to produce the first ever three-dimensional map of all its neurons. They call this circuit diagram the “connectome”, and it could help us better understand everything from imagination and language to the miswirings that cause mental illness. But with 100 billion neurons hooked together by more connections than there are stars in the MilkyWay, the brain is a challenge that represents petabyte-level data.