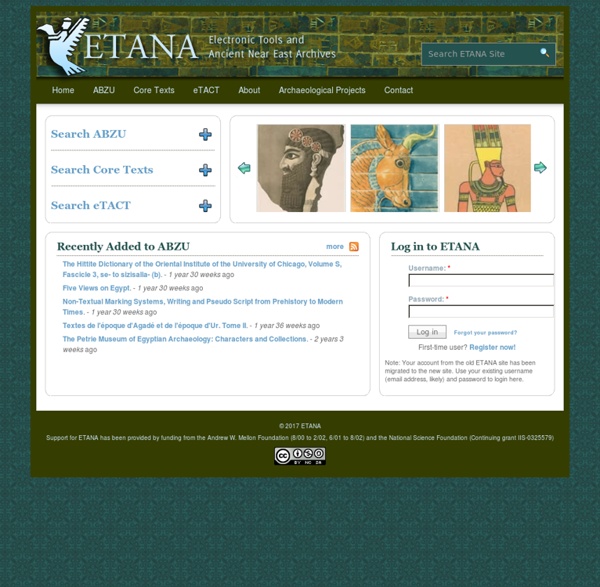 Codex Sinaiticus AWOL - The Ancient World Online Early Christian Writings: New Testament, Apocrypha, Gnostics, Church Fathers Machine assisted translation of cuneiform texts The CDLI is delighted to announce that the international research collaboration Machine Translation and Automated Analysis of Cuneiform Languages (MTAAC) has been funded through the Trans-Atlantic Platform Digging into Data Challenge by the American National Endowment for the Humanities, the German Research Foundation, and the Canadian Social Sciences and Humanities Research Council. Methods of computer assisted annotation of cuneiform texts are currently rule and dictionary based. To be reliable, these methods are dependent on human intervention. In the case of large corpora with non-homogeneous texts, the time required to verify each line appears to make this approach impracticable. Additionally, current methods are not context-aware, or are implemented in a fashion that is not specialized enough to enable unsupervised text analysis. The MTAAC project’s broad goal is to address the gap in the NLP of cuneiform languages. Principal investigator of the MTAAC research team is Heather D.

Codex Bezae Christian Works There are half-a-dozen ancient manuscripts which are the foundation of our understanding of the text of the New Testament writings. Among these stands the copy known since the sixteenth century as Codex Bezae Cantabrigiensis. Among this group, Codex Bezae occupies a unique place for several reasons. The manuscript is the work of a single scribe, one trained primarily to copy Latin texts. The manuscript is best dated to the end of the fourth or the beginning of the fifth century. It is probable that the Codex Bezae remained there, in the Monastery of St Irenaeus, until the sixteenth century. A printed transcription of the manuscript (using a font imitating the shape of the characters) was published by the University Press in 1793. Of the many distinctive readings of the manuscript, the following deserve special mention: It is the oldest manuscript to contain the story of the adulterous woman (John 7.53-8.11). Editions:

The Sumerian Tablets Contain Our Entire Biblical Stories, with These Amazing Differences and Some Other Facts You Really Need to Hear | Awakening? Start Here (Before It's News) An Exclusive You Have To See: The Last Frontier of Free Press Is Here! No More Censorship, Unlike YouTube and Others! One of the oldest civilizations on Earth, the 30,000 Sumerian tablets were found buried in the desert near Baghdad from an underground structure estimated to be over 6000 years old, by two Muslims digging a well around the same time that Israel became a nation again. All bible stories are found within these writings and one set of tablets which state the author is our Lord and these texts will be buried until the appropriate time when they will be revealed.