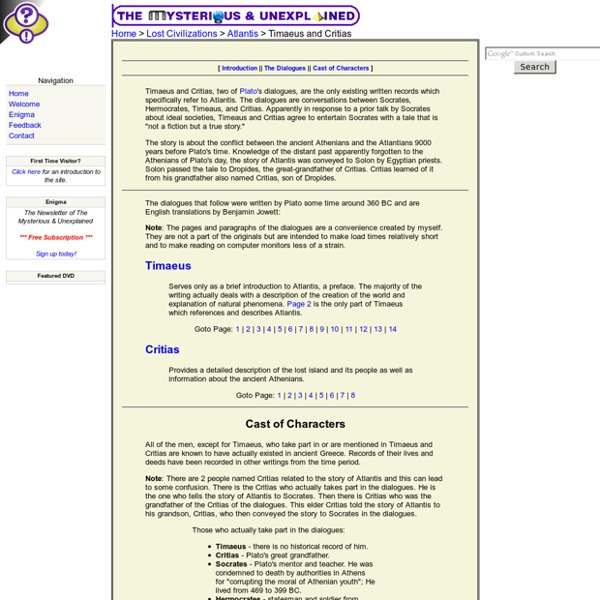 [ Introduction || The Dialogues || Cast of Characters ] Timaeus and Critias, two of Plato's dialogues, are the only existing written records which specifically refer to Atlantis. The dialogues are conversations between Socrates, Hermocrates, Timeaus, and Critias. Apparently in response to a prior talk by Socrates about ideal societies, Timeaus and Critias agree to entertain Socrates with a tale that is "not a fiction but a true story." The story is about the conflict between the ancient Athenians and the Atlantians 9000 years before Plato's time. The dialogues that follow were written by Plato some time around 360 BC and are English translations by Benjamin Jowett: Note: The pages and paragraphs of the dialogues are a convenience created by myself. Serves only as a brief introduction to Atlantis, a preface. Goto Page: 1 | 2 | 3 | 4 | 5 | 6 | 7 | 8 | 9 | 10 | 11 | 12 | 13 | 14 Critias Goto Page: 1 | 2 | 3 | 4 | 5 | 6 | 7 | 8 Those who actually take part in the dialogues:

Lemuria Lemuria Lemuria, or Mu, is a mythical continent that allegedly was located in the Pacific Ocean area or the Pacific Ring of Fire. Today we read about accelerating natural disasters in that area - earthquakes, tsunamis - dormant volcanoes becoming active - as the tectonic plates continue to shift. This takes us to creation myths - thousands of flood stories around the world - the destruction of a continent and civilization by water, and the creation of something new to replace it in the cycles of time by the consciousness hologram that creates the illusion that this is all real. Japan: The Yonaguni Ruins are believed by some researchers to connect with Lemuria The islands within the Ring of Fire have ancient monuments, petroglyphs, and caves that hold clues to one of many ancient civilizations that once existed there - the most famous Easter Island. Samoans speak of a place called Bolutu. The Ica Stones of Peru may depict maps of the lost continent of Lemuria. Rig Veda History of the Concept

Lemuria The last surviving LEMURS exist on Madagascar.This is why the ancient land tying India and Australia together, that sank incrementally over time, is referred to as LEMURIA. Myriads of ancient writings from the South Seas, and the ancient Tamil writings on palm tree bark still exist protected underground in the Vatican archives, having been pillaged from various cultures and transported to Rome by order of various popes. The Tamil bark writings in Southern India tell of the gigantic Southern part of India which used to connect to Australia cataclysmically sinking incrementally over a long period of time. Modified after a map in "Ancient World", North Mahalingam. International Society for Investigation of Ancient Civilization. 101 Mount Road, Guindy, Madras, India 50032 ALTERNATIVE THREE (in RealVideo) AIDS is Germ Warfare

Lemuria Unsolved Mysteries of Lemuria Lemuria was an ancient civilization which existed prior to and during the time of Atlantis. Physically, it is believed that Lemuria existed largely in the Southern Pacific, between North America and Asia/Australia. Lemuria is also sometimes referred to as Mu, or the Motherland (of Mu). At its peak of civilization, the Lemurian people were both highly evolved and very spiritual. We're going to tell you a little story. They were the ancient ancestors of the Native Americans. These crystals were taken deep within the Earth to be stored and preserved. These holy people received their signs and began going underground. Then the flood came. Now, we tell this story from the point of view of the Native Americans, but they were not the only people who went underground. The prophets also knew that when the new time came, after the flood, mankind would move away from the sacred teachings. As the memory is activated in each of you, it will not necessarily take the form of information. Liked it ?

Egyptian Archaeologist Admits Pyramids Contain Alien Technology |Latest UFO News| UFO 2011 Sightings|Alien Pictures|2011 Solar Flares|Disclosure Project|Web Bot UFO Aliens may have helped build Pyramids of Giza says, Cairo university archeologist Head of the Cairo University Archaeology Department, Dr Ala Shaheen in December 2010 had told an audience that there might be truth to the theory that aliens helped the ancient Egyptians build the oldest of pyramids, the Pyramids of Giza. On being further questioned by Mr Marek Novak, a delegate from Poland as to whether the pyramid might still contain alien technology or even a UFO with its structure, Dr Shaheen, was vague and replied “I can not confirm or deny this, but there is something inside the pyramid that is “not of this world”. Delegates to the conference on ancient Egyptian architecture were left shocked, however Dr Shaheen had refused to comment further or elaborate on his UFO and alien related statements. Actually ancient Egyptian writings very often talk of beings from the sky, the sky opening and bright lights coming down to teach them technology and give them wisdom.

Project Avalon - Klaus Dona: The Hidden History of the Human Race Click here for the PDF version of this interview (20 pages) Click here for the video presentation March 2010 **Ed note: Some transcripts contain words or phrases that are inaudible or difficult to hear and are, therefore, designated in square brackets.** BILL RYAN (BR): This is Bill Ryan here from Project Camelot and Project Avalon. Klaus is going to be doing an audio commentary on one of his extremely special, unusual, and fascinating slide shows about the artifacts and the various phenomena that he has been researching, discovering, investigating personally all over the world relating to what I think you could legitimately call The Hidden History of the Human Race. KLAUS DONA (KD): That's a very good summary, yes. BR: [laughs] So I'm going to step back here, and what follows now, just kick back and enjoy this slide presentation. What are we looking at here ? Ancient World Maps Ecuador Even the next one, [right, above] you can see how this statue is sitting. Bolivia Colombia Giants BR: Good!

Mythical Civilizations Atlantis Grand Canyon Cave City? Hi-Brazil Laramidia Lemuria, Mu Phantom Islands Ancient Aliens Subterranean Civilizations, Agartha, Hollow Earth Atlantean Sons Over time, with the advent of civilization and technology, the divisions between the Adamic and pre-Adamic races became increasingly more apparent. Whereas the Adamic race held on to the belief in the one God who had specially created them, the preAdamic race refuted the belief in the existence of God, instead focusing on the acquisition of wealth and power - worshipping the creature rather than the Creator. As these differences became more and more clear, the world came to be divided into two basic divisions: the Sons of the Law of One, those who held to the belief in the one God as the creator of the universe and of mankind, and the Sons of Belial, those who denied the existence of God and instead worshipped themselves. Cayce explained it thus: "In Atlantean land during those periods of early rise of sons of Belial as oppositions that became more and more materialized as the powers were applied for self-aggrandizement." of beings ruled over millions of slaves. of One. mankind. weapon. forces."

Peruvian connection The Peruvian connection Despite what mainstream isolationists will try and tell you, the Polynesians entered the Pacific islands through two gateways; from Peru to the Marquesas/Rapa nui and from Canada to Hawaii. Genetics indicate that the majority of Polynesians are derived from Canada and almost all Polynesians say their formative Island homeland is Hawai'i, this is certainly where they learned many of their navigational skills and also where their culture flowered, but many legends and cultural traits appear to come from elsewhere, giving them greater skills, knowledge and mana. The following extract is from Thor Heyerdahls book "Early man and the Ocean"; "Amongst the chiefly families of New Zealand, Easter Island and the Chatham islands there is a genetically different group who are : tall, pale skinned, bearded, long headed, with a semitic nose, narrow lips and occasionally reddish brown hair with a wavy texture. The Tin was extremely important as it was used for making Bronze. 1. 2.

Bentwaters1980 Forum - Hy Brasil Hy Brasil the ‘other’ Atlantis It is undisputed that the most famous ‘lost island’ is Atlantis. But there is another island which is just as mysterious called Hy-BrasilThe island is said to be located to the west of Ireland and is known as Hy-Brasil in Irish mythology.."Hy-Brasil was noted on maps as early as 1325, when Genoese cartographer Dalorto placed the island west of Ireland. Hy-Brasil is known by various names: Also called Bersil, Brazir, O'Brasil, O'Brassil, Breasil, Brasylle, Hy-Brazil, or Hi-Brasil. In his book "Ireland - A Journey Into Lost Time", P.A. According to legends of long ago, Hy-Brasil was a secret land once ruled by priests. The island is said to be cloaked in mist, except for one day each seven years, when it became visible but could still not easily be reached.Over the centuries a number of maps have charted the position of the island. There have been numerous expeditions in the past to search for this mythical land. The decoded message read: