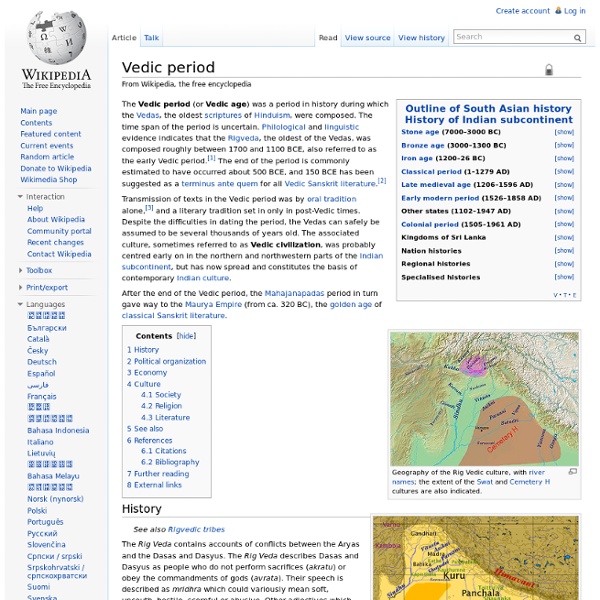 The Vedic period (or Vedic age) was a period in history during which the Vedas, the oldest scriptures of Hinduism, were composed. The time span of the period is uncertain. Philological and linguistic evidence indicates that the Rigveda, the oldest of the Vedas, was composed roughly between 1700 and 1100 BCE, also referred to as the early Vedic period.[1] The end of the period is commonly estimated to have occurred about 500 BCE, and 150 BCE has been suggested as a terminus ante quem for all Vedic Sanskrit literature. Transmission of texts in the Vedic period was by oral tradition alone,[3] and a literary tradition set in only in post-Vedic times. Despite the difficulties in dating the period, the Vedas can safely be assumed to be several thousands of years old. The associated culture, sometimes referred to as Vedic civilisation, was probably centred early on in the northwestern parts of the Indian subcontinent, and spread after 1200 BCE to the Ganges Plain. History Second urbainsation Related:  Shiva • Ancient People

Shakti - Power and Femininity in Indian Art Long ago, there reigned a mighty king named Ila. Once while hunting, he came upon a grove where Shiva was making love with Parvati, and surprise of surprises, Shiva had taken the form of a woman to please her. Everything in the woods, even the trees had become female, and as he approached even King Ila himself was transformed into a woman! Thus says the Shaktisangama Tantra: Woman is the creator of the universe, the universe is her form; woman is the foundation of the world, she is the true form of the body. In woman is the form of all things, of all that lives and moves in the world. No wonder even the most powerful of gods, like Shiva above, crave to enter the feminine form, hoping to acquire at least some of her glorious power. According to the Devi-Mahatmya: By you this universe is borne, By you this world is created, O Devi, by you it is protected. The earliest term applied to the divine feminine, which still retains its popular usage, is Shakti. 1). The Yoni 'Aho! Elgood, Heather.

Indra Origins[edit] Aspects of Indra as a deity are cognate to other Indo-European gods; they are either thunder gods such as Thor, Perun, and Zeus, or gods of intoxicating drinks such as Dionysus. The name of Indra (Indara) is also mentioned among the gods of the Mitanni, a Hurrian-speaking people who ruled northern Syria from ca.1500BC-1300BC.[5] Vedic Indra corresponds to Verethragna of the Zoroastrian Avesta as the noun verethragna- corresponds to Vedic vrtrahan-, which is predominantly an epithet of Indra. The word vrtra-/verethra- means "obstacle". In the Rigveda[edit] The Rigveda states, He under whose supreme control are horses, all chariots, the villages, and cattle; He who gave being to the Sun and Morning, who leads the waters, He, O men, is Indra. (2.12.7, trans. It further states, Indra, you lifted up the pariah who was oppressed, you glorified the blind and the lame. The Rig-Veda frequently refers to him as Śakra: the mighty-one. Status and function[edit] Characteristics[edit]

Babylonia Babylonia was an ancient Akkadian-speaking Semitic nation state and cultural region based in central-southern Mesopotamia (present-day Iraq). It emerged as an independent state c. 1894 BC, with the city of Babylon as its capital. It was often involved in rivalry with its fellow Akkadian state of Assyria in northern Mesopotamia. Babylonia became the major power in the region after Hammurabi (fl. c. 1792 - 1752 BC middle chronology, or c. 1696 – 1654 BC, short chronology) created an empire out of many of the territories of the former Akkadian Empire. The Babylonian state retained the written Semitic Akkadian language for official use (the language of its native populace), despite its Amorite founders and Kassite successors not being native Akkadians. The earliest mention of the city of Babylon can be found in a tablet from the reign of Sargon of Akkad (2334- 2279 BC), dating back to the 23rd century BC. Periods[edit] Old Pre-Babylonian period[edit] The Empire of Hammurabi Babylonian Decline

Maurya Empire The Maurya Empire was a geographically extensive Iron Age historical power in ancient India, ruled by the Maurya dynasty from 322–185 BCE. Originating from the kingdom of Magadha in the Indo-Gangetic Plain (modern Bihar, eastern Uttar Pradesh) in the eastern side of the Indian subcontinent, the empire had its capital city at Pataliputra (modern Patna).[1][2] The Empire was founded in 322 BCE by Chandragupta Maurya, who had overthrown the Nanda Dynasty and rapidly expanded his power westwards across central and western India, taking advantage of the disruptions of local powers in the wake of the withdrawal westward by Alexander's Hellenic armies. By 316 BCE the empire had fully occupied Northwestern India, defeating and conquering the satraps left by Alexander.[3] Chandragupta then defeated the invasion led by Seleucus I, a Macedonian general from Alexander's army, gaining additional territory west of the Indus River.[4] History[edit] Chandragupta Maurya and Chanakya[edit] Bindusara[edit]

Siva and Saivism Sects Mahabharata Manuscript illustration of the Battle of Kurukshetra The Mahabharata or Mahābhārata (Sanskrit: महाभारतम्, Mahābhāratam, pronounced [məɦaːˈbʱaːrət̪əm]) is one of the two major Sanskrit epics of ancient India, the other being the Ramayana.[1] Besides its epic narrative of the Kurukshetra War and the fates of the Kaurava and the Pandava princes, the Mahabharata contains philosophical and devotional material, such as a discussion of the four "goals of life" or purusharthas (12.161). Among the principal works and stories in the Mahabharata are the Bhagavad Gita, the story of Damayanti, an abbreviated version of the Ramayana, and the Rishyasringa, often considered as works in their own right. Traditionally, the authorship of the Mahabharata is attributed to Vyasa. The other notable version of Mahabarath is Andhra mahabharatam, a Telugu language manuscript written by Kavitrayam in between 11-14th century AD. Textual history and structure Accretion and redaction The snake sacrifice of Janamejaya B.

Akkadian language The mutual influence between Sumerian and Akkadian had led scholars to describe the languages as a sprachbund.[3] Akkadian proper names were first attested in Sumerian texts from ca. the late 29th century BC.[4] From the second half of the third millennium BC (ca. 2500 BC), texts fully written in Akkadian begin to appear. Hundreds of thousands of texts and text fragments have been excavated to date, covering a vast textual tradition of mythological narrative, legal texts, scientific works, correspondence, political and military events, and many other examples. By the second millennium BC, two variant forms of the language were in use in Assyria and Babylonia, known as Assyrian and Babylonian respectively. Akkadian had been for centuries the lingua franca in Mesopotamia and the Ancient Near East. Classification[edit] Within the Near Eastern Semitic languages, Akkadian forms an East Semitic subgroup (with Eblaite). History and writing[edit] Writing[edit] Development[edit] Decipherment[edit]

Indus Valley Civilization The major sites of the Indus Valley Civilization imposed over modern borders The Indus Valley Civilization (IVC) was a Bronze Age civilization (3300–1300 BCE; mature period 2600–1900 BCE) extending from what today is northeast Afghanistan to Pakistan and northwest India (see map). Along with Ancient Egypt and Mesopotamia, it was one of three early civilizations of the Old World, and the most widespread among them, covering an area of 1.25 million km2.[3] It flourished in the basins of the Indus River, one of the major rivers of Asia, and the now dried up Sarasvati River,[4][5] which once coursed through northwest India and eastern Pakistan together with its tributaries flowed along a channel, presently identified as that of the Ghaggar-Hakra River on the basis of various scientific studies.[7][8][9] The Harappan language is not directly attested and its affiliation is uncertain since the Indus script is still undeciphered. Discovery and history of excavation Chronology Geography Cities

Aspects of Lord Siva By Jayaram V The subject regarding the aspects of Shiva (Siva) can be approached from many perspectives. Here I have presented Shiva as the Supreme Brahman Himself, a claim validated by the Vedas themselves in numerous verses such as the ones found in the Svetasvatara Upanishad. Thus in presenting Shiva as the Cosmic Being, I have not broken any tradition. However, I have taken some liberties in associating his popular names to the well known aspects and manifestations of Brahman based upon their meaning and significance. In Saiva tradition, Lord Shiva is considered the highest, supreme Brahman Himself. The Unmanifested aspect - Nirguna Brahman Manifested aspect - Saguna Brahman Material aspect - Viraj Individual aspects - Amsas or Emanations Maheswara or Mahadeva As in case of Brahman, the unmanifested aspect of Shiva is beyond our knowledge. Isvara or Parama Shiva Viraj, Rudra or Shiva Amsas or Emanations Creation is an extension of the Supreme Brahman. Suggested Further Reading