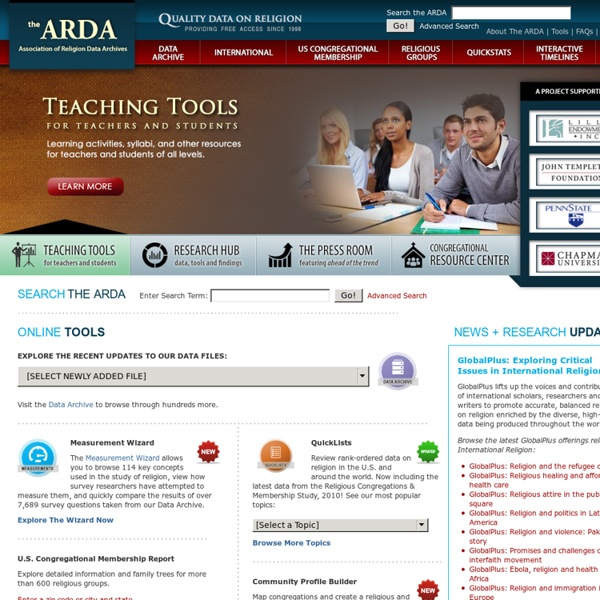 The Measurement Wizard allows you to browse 114 key concepts used in the study of religion, view how survey researchers have attempted to measure them, and quickly compare the results of over 7,689 survey questions taken from our Data Archive. Download learning modules to interactively explore religion topics. Find syllabi, assignments, and links for teaching religion in multiple disciplines. Review rank-ordered data on religion in the U.S. and around the world. **Now including the latest data from the Religious Congregations & Membership Study, 2010!**

Geographic Distribution of Religious Centers in the U.S. These maps were generated from the listings in the Pluralism Project's Directory of Religious Centers and reflect the distributions as of August 2006. Click on the thumbnail to view a printable, full-size map in a new window. Interfaith: 604 Centers Religious identification in the U.S. Religious practices and faith groups Menu A parallel report for Canada is located elsewhere The Macro Data Guide - Freedom House Institution Freedom House is a Washington-based non-governmental organisation established in 1941 to promote democracy around the globe. The organisation has since 1973 published the Comparative Survey of Freedom, which rates the level of democracy or freedom in all independent states and some disputed and dependent territories. Freedom House also conducts annual surveys on global media freedom, European and Eurasian nations in transition towards democracy, in-depth analyses of selected countries believed to be at a crossroad of their political development, as well as special reports focusing on particular fields or territories of interest. Datasets

Ogdoad In Egyptian mythology, the Ogdoad (Greek "ογδοάς", the eightfold) were eight deities worshipped in Hermopolis during what is called the Old Kingdom, the third through sixth dynasties, dated between 2686 to 2134 BC. In Egyptian mythology[edit] Together the four concepts represent the primal, fundamental state of the beginning. They are what always was. In the myth, however, their interaction ultimately proved to be unbalanced, resulting in the arising of a new entity. When the entity opened, it revealed Ra, the fiery sun, inside.

Has Religion Made Useful Contributions to Civilization? Has Religion Made Useful Contributions to Civilization? by Bertrand Russell My own view on religion is that of Lucretius. I regard it as a disease born of fear and as a source of untold misery to the human race. The strange star that has serious scientists talking about an alien megastructure A long exposure image showing an airplane passing in the sky during the Perseids meteor shower over the remains of a centuries old Christian basilica near the town of Pirdop, Bulgaria, early on Aug. 12. (Nikolay Doychinov/AFP/Getty Images) “It was kind of unbelievable that it was real data,” said Yale University astronomer Tabetha Boyajian. “We were scratching our heads.

Planet Tozer Creative Review commissioned photographer Jason Tozer to shoot these pictures on behalf of Sony using its new Alpha 350 digital camera. They are, in fact, all common-or-garden soap bubbles, shot in-camera. We'll be revealing more on how Tozer obtained these stunning images later in the week. The full series is shown below and to see them at a larger size simply click on each image. Alternatively you can check out the Flickr set we've created for the project at CR's photostream page. This Year’s Finest Conjunction: Venus and Jupiter Two brightest planets Venus and Jupiter come as close as a third of a degree apart as seen from North America. It will be easy to spot them in the western sky as no other celestial body will outshine the beautiful tandem when the sun and the moon are down. “To the eye they’ll look like a double star,” said Kelly Beatty, a senior editor at Sky & Telescope magazine. “Anyone who hasn’t glanced at the evening sky for a while will be surprised by how dramatically tight the pairing is.” The closest conjunction will happen on June 30th and July 1st, 2015.

Arabic phrasebook The following phrasebook deals mostly with Modern Standard Arabic. See the Lebanese Arabic phrasebook, Jordanian Arabic phrasebook or the Egyptian Arabic phrasebook for Arabic dialects relating to those regions/countries. Arabic is the fourth most widely-spoken language in the world and is one of the six official languages of the United Nations. It is spoken in many popular destinations in North Africa and the Middle East. The Multidimensional Human There is evidence to suggest that other worlds or dimensions exist just beyond the range of our normal perception, but we remain unaware of them because our minds are not objectively conscious at these higher levels. Our normal level of consciousness is restricted in some way, preventing us from tuning in to these subtler realms. If you have young children you might have noticed them looking a things that don't appear to be there or talking to "imaginary friends". Very young children can actually see into these hidden worlds, but they lose the ability as they grow older. In altered states of consciousness the censorship of the physical mind ceases.

Edgar Cayce on human origins People usually demand a beginning, so in the beginning there was a sea of spirit and it filled all of space. The spirit was static, content, and aware of itself. It was a giant resting on the bosom of its thought and contemplating what it is. Then the spirit moved into action.

LEMEGETON, Part 1: Goetia The 9th spirit in order is Paimon; a great king, & very Obedient to Lucifer, he appeareth in ye forme of a man, sitting one a dromedary, wh a Crowne most glorious on his head. Three [There] goeth before him a host of spirits like men with Trumpets and well sounding Cymballs, and all other sorts of musicall Instruments &c. he hath a great voice, and roareth at his first comming, and his speech [voice] is such as ye Magician cannot well understand, unless he compelleth him. [102r] The 10th spirit is Buer, a great president and appereth in

Maya Once considered an unsolvable enigma, recent advances in the decipherment of the Maya writing system has not only shed light on the mechanics of the script, but also on the socio-political, artistic, and historical aspects of Maya civilization. As a whole, the Maya people created the longest lasting civilization of the New World. It became distinguishable from other early farming cultures of Mesoamerica in the middle of the first millenium BCE, when the first great Maya cities were constructed. Their culture endured through changes, wars, and disasters until it was suppressed by the Spanish conquest in the 16th and 17th centuries. The last indepedent Maya kingdom of Tayasal, fell as late as 1697.