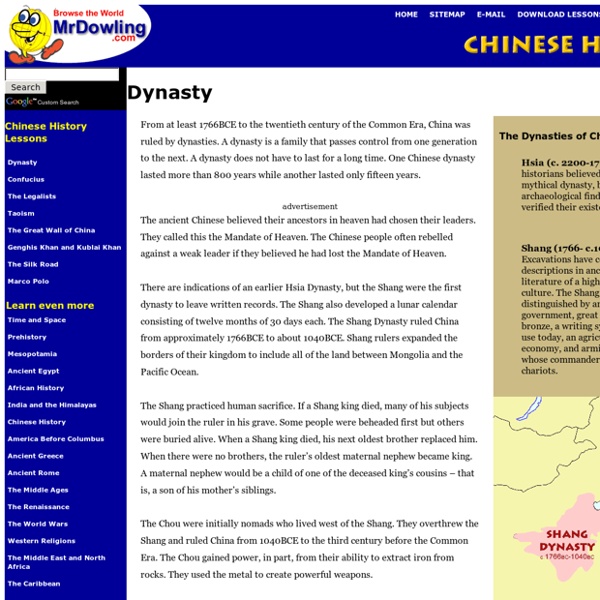 From at least 1766BCE to the twentieth century of the Common Era, China was ruled by dynasties. A dynasty is a family that passes control from one generation to the next. A dynasty does not have to last for a long time. One Chinese dynasty lasted more than 800 years while another lasted only fifteen years. advertisement The ancient Chinese believed their ancestors in heaven had chosen their leaders. There are indications of an earlier Hsia Dynasty, but the Shang were the first dynasty to leave written records. The Shang practiced human sacrifice. The Chou were initially nomads who lived west of the Shang. The Chou developed a feudal system in China. The Chou rulers taxed their subjects, but they used the wealth they collected to build huge walls to defend their cities from nomadic warriors. advertisement Chinese nobles gradually gained more power than the Chou rulers in a period of Chinese history that historians call the Age of Warring States. Listen as Mr. Related:  Ancient cultures

China History: Chronology, Dynasty Qin Han Tang Song Yuan Ming Qing China, one of the countries that can boast of an ancient civilization, has a long and mysterious history - almost 5,000 years of it! Like most other great civilizations of the world, China can trace her culture back to a blend of small original tribes which have expanded till they became the great country we have today. It is recorded that Yuanmou man is the oldest hominoid in China and the oldest dynasty is Xia Dynasty. From the long history of China, there emerge many eminent people that have contributed a lot to the development of the whole country and to the enrichment of her history. Chinese society has progressed through five major stages - Primitive Society, Slave Society, Feudal Society, Semi-feudal and Semi-colonial Society, and Socialist Society. Chinese History Chronology

Zhou Dynasty, Zhou Dynasty History, History of Ancient China, China's dynasties Era Information Time: 1027 B.C.-221B.C.Location of Capital:Hao, near the city of Xian, Shannxi ProvinceEmperors: Twelve kings for eleven dynasties Replaced by:Spring and Autumn Period According to Chinese accounts, Zhou was built by a chieftain of a tribe called Zhou. The chieftain overthrew Shang’s last ruler and build the Zhou dynasty. He settled down in Hao, a city near today’s Xi’an city in Shannxi province. Take a Xian Tours to experience the historical site. Zhou dynasty has lasted for a long time from 1027B.C. to 221B.C. The Zhou Dynasty originated from the Zhou clan whose existence stretches back into history. At that time, the Shang Dynasty was under the rule of King Zhou. After Zhou Wenwang died, his son Ji Fa (Zhou Wuwang) succeeded him. The achievements during the Zhou Dynasty in economy, politics, science and culture, were much more illustrious than any which occurred during the Shang Dynasty.

History of China, China History, China History guide, Chinese hi dynasties in China Chinese Dynasty Guide - The Art of Asia - History and Maps Chinese history, which dates back more than 5,000 years, is extraordinarily rich, complex-and potentially confusing. Understanding at least its basic chronology and some of its most notable events and developments is made somewhat easier by virtue of its ancient system of dynasties. The word dynasty means, quite simply, a succession of rulers from the same family. Beginning with the Bronze Age Shang dynasty, historical eras in China have borne the name of the family or clan that dominated during that period. Some dynasties, such as the Chou and the Ming, lasted for centuries. Over the lengthy span of Chinese history, each dynasty is distinguished both by its name and by the impact of individuals, outside influences, and technological advances on all aspects of its culture-economic, political, artistic, and religious. To use this guide, select from the dynasties at right or click on the timeline above.

Internet East Asian History Sourcebook There is no way of avoiding the fact that China is the central culture of Eastern Asia. Massively larger than any of her neighbors, China may have developed its cultural forms in relative isolation, but since the advent of Buddhism has both absorbed outside influences and disseminated its own culture. Japanese, Korean and Vietnamese cultures are not comprehensible without taking into account power of Chinese culture in art, literature and religion. Chinese culture itself is highly complex, and the other East Asian cultures also reflect local circumstances and traditions. See my Brooklyn College: Chinese Cultural Studies class page. This page is a subset of texts derived from the three major online Sourcebooks listed below, along with added texts and web site indicators. General The Korean War Cambodia Constitution, 1993 [At Cambodian Parliament.org] Tibet Constitution 1991 [At ICL] This is the constitution of the "government in exile". Mongolia Constitution, 1992 [At ICL] U.S. John W. E-Texts

Silk Road Silk Road extending from Europe through Egypt, Somalia, the Arabian Peninsula, Iran, Afghanistan, Central Asia, Sri Lanka, Pakistan, India, Bangladesh, Burma, Java-Indonesia, Philippines and Vietnam until it reaches China. The land routes are red, and the water routes are blue. Port cities on the maritime silk route featured on the voyages of Zheng He.[1] The Silk Road, or Silk Route, is a series of trade and cultural transmission routes that were central to cultural interaction through regions of the Asian continent connecting the West and East by linking traders, merchants, pilgrims, monks, soldiers, nomads and urban dwellers from China to the Mediterranean Sea during various periods of time.[2] Extending 4,000 miles (6,437 kilometres), the Silk Road gets its name from the lucrative trade of Chinese silk which was carried out along its length, and began during the Han Dynasty (206 BC – 220 AD). Name[edit] History[edit] Precursors[edit] Cross-continental journeys[edit] Hellenistic era[edit]

Ancient China Life History Facts:Dynasties,Discoveries,Religions,Crossbow,Sports,Chopsticks The Silk Road On the eastern and western sides of the continent, the civilisations of China and the West developed. The western end of the trade route appears to have developed earlier than the eastern end, principally because of the development of the the empires in the west, and the easier terrain of Persia and Syria. The Iranian empire of Persia was in control of a large area of the Middle East, extending as far as the Indian Kingdoms to the east. Trade between these two neighbours was already starting to influence the cultures of these regions. This region was taken over by Alexander the Great of Macedon, who finally conquered the Iranian empire, and colonised the area in about 330 B.C., superimposing the culture of the Greeks. This `crossroads' region, covering the area to the south of the Hindu Kush and Karakorum ranges, now Pakistan and Afghanistan, was overrun by a number of different peoples. The eastern end of the route developed rather more slowly. Brian Hook (Ed.)

Infobase Most of the laws of Ancient China came from the moral teachings written in the legal-code books. The basic law was devotion of children to parents and obedience to the government. The rest of the laws consisted of orders that were handed down by the emperors. If the laws were broken the punishments were severe. Any girl who insulted her parents was strangled; if she wounded them she was tortured and cut up into pieces. Several crimes were punished by banishment (being sent from the country), which was often for life. The burial sites for families were considered sacred and could not be taken over by anyone else. The most shameful of all punishments in Ancient China was decapitation (beheading). Crimes against the emperor brought the accused no mercy. Soldiers were usually chosen to be executioners and they were proud of the strength that they needed to carry out their duties.

Chinese overview Version for printing Several factors led to the development of mathematics in China being, for a long period, independent of developments in other civilisations. The geographical nature of the country meant that there were natural boundaries (mountains and seas) which isolated it. On the other hand, when the country was conquered by foreign invaders, they were assimilated into the Chinese culture rather than changing the culture to their own. The first thing to understand about ancient Chinese mathematics is the way in which it differs from Greek mathematics. Chinese mathematics was, like their language, very concise. The method of calculation is very simple to explain but has wide application. In fact much Chinese mathematics from this period was produced because of the need to make calculations for constructing the calendar and predicting positions of the heavenly bodies. From the sixth century mathematics was taught as part of the course for the civil service examinations.