ReligiousTolerance.org by the Ontario Consultants on Religious Tolerance 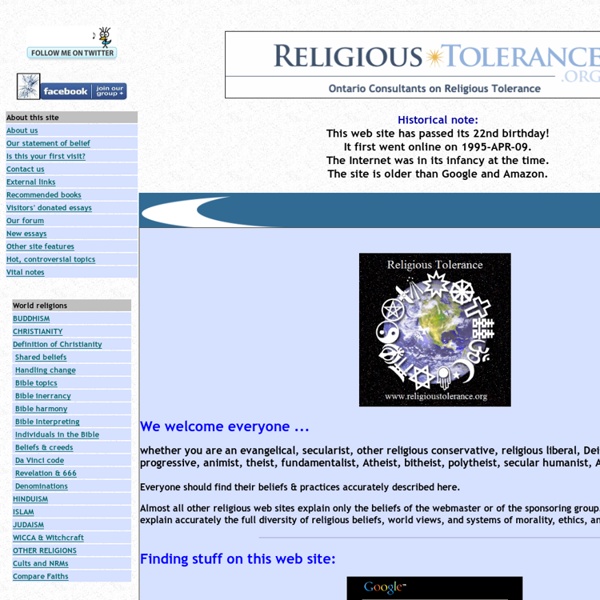 We welcome evangelicals, secularists, religious conservatives, religious liberals, Deists, Wiccans, other Pagans, progressives, animists, theists, fundamentalists, Atheists, polytheists, humanists, Agnostics, etc. Everyone should find their beliefs & practices accurately described here. Almost all other religious web sites explain only the beliefs of the webmaster or sponsoring faith group. We are different: we try to explain accurately the full diversity of religious beliefs, world views, and systems of morality, ethics, and values.

Geographic Distribution of Religious Centers in the U.S. These maps were generated from the listings in the Pluralism Project's Directory of Religious Centers and reflect the distributions as of August 2006. Click on the thumbnail to view a printable, full-size map in a new window. Interfaith: 604 Centers Jainism: 94 Centers Sikhism: 244 Centers Religion Religious activities around the world Many religions may have organized behaviors, clergy, a definition of what constitutes adherence or membership, holy places, and scriptures. The practice of a religion may include rituals, sermons, commemoration or veneration (of a deity, gods or goddesses), sacrifices, festivals, feasts, trance, initiations, funerary services, matrimonial services, meditation, prayer, music, art, dance, public service or other aspects of human culture.

Ogdoad In Egyptian mythology, the Ogdoad (Greek "ογδοάς", the eightfold) were eight deities worshipped in Hermopolis during what is called the Old Kingdom, the third through sixth dynasties, dated between 2686 to 2134 BC. In Egyptian mythology[edit] Together the four concepts represent the primal, fundamental state of the beginning. They are what always was. Osho Chandra Mohan Jain (11 December 1931 – 19 January 1990), also known as Acharya Rajneesh from the 1960s onwards, as Bhagwan Shree Rajneesh ( pronunciation ) during the 1970s and 1980s, and as Osho ( pronunciation ;) from 1989, was an Indian mystic, guru and spiritual teacher.

Major religious groups The world's principal religions and spiritual traditions may be classified into a small number of major groups, although this is by no means a uniform practice. This theory began in the 18th century with the goal of recognizing the relative levels of civility in societies.[2] History of religious categories An 1821 map of the world, where "Christians, Mahometans, and Pagans" correspond to levels of civilization (The map makes no distinction between Buddhism and Hinduism). An 1883 map of the world divided into colors representing "Christians, Buddhists, Hindus, Mohammedans and Pagans". In world cultures, there have traditionally been many different groupings of religious belief.

Blessed are the un-cool People sometimes assume that because I’m a progressive 30-year-old who enjoys Mumford and Sons and has no children, I must want a super-hip church—you know, the kind that’s called “Thrive” or “Be” and which boasts “an awesome worship experience,” a fair-trade coffee bar, its own iPhone app, and a pastor who looks like a Jonas Brother. While none of these features are inherently wrong, (and can of course be used by good people to do good things), these days I find myself longing for a church with a cool factor of about 0. That’s right. I want a church that includes fussy kids, old liturgy, bad sound, weird congregants, and…brace yourself…painfully amateur “special music” now and then. Why? Well, for one thing, when the gospel story is accompanied by a fog machine and light show, I always get this creeped-out feeling like someone’s trying to sell me something.

The strange star that has serious scientists talking about an alien megastructure A long exposure image showing an airplane passing in the sky during the Perseids meteor shower over the remains of a centuries old Christian basilica near the town of Pirdop, Bulgaria, early on Aug. 12. (Nikolay Doychinov/AFP/Getty Images) “It was kind of unbelievable that it was real data,” said Yale University astronomer Tabetha Boyajian. “We were scratching our heads. For any idea that came up there was always something that would argue against it.” She was talking to the New Scientist about KIC 8462852, a distant star with a very unusual flickering habit.