Physicists Reveal That The Great Pyramid At Giza Can Focus Electromagnetic Energy. Take a moment and breathe. 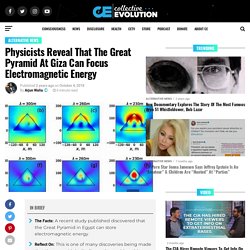 Place your hand over your chest area, near your heart. Breathe slowly into the area for about a minute, focusing on a sense of ease entering your mind and body. Click here to learn why we suggest this. When patients ask anesthesiologists what we charge for putting them to sleep, we often say we do it for free. We only bill them for the waking up part.

This isn’t just a way of deflecting a question, it also serves as a gentle reminder to both parties regarding the importance of “coming to.” How does Anesthesia work ? From an Anesthesiologist’s point of view, we really shouldn’t charge for putting someone to sleep. In addition, those in my field have to contend with the reality that we really don’t know what we are doing. Take ether, for example. Why we still don’t know… If you have never closely considered how our bodies do what they do (move, breathe, grow, pee, reproduce, etc.), the answers may be astounding. What happens when someone goes “under”? Dive Deeper. Study reveals electromagnetic properties of the Great Pyramid of Giza. By Resonance Science Foundation There has been a number of recent scientific discoveries about the Great Pyramids of Giza using technologically advanced methods. 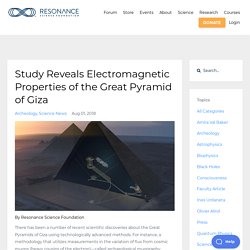 For instance, a methodology that utilizes measurements in the variation of flux from cosmic muons (heavy cousins of the electron)—called archaeological muography—detected evidence for a possible second entrance and hidden corridor in the Great Pyramid of Giza (the largest of the Pyramids of Giza). As well, thermal imaging have revealed perplexing thermal anomalies in the Great Pyramid. Several explanations were put forward to explain the cause of the anomalies, but one particularly suggestive explanation was that it is due to increased air circulation caused by a hidden corridor or chamber -- corroborating similar findings using muonic radiographic analysis. The Lost Ancient Humans of Antarctica. Graham Hancock on how Pyramids were built. Sacred Sites at Sacred Destinations - Explore sacred sites, religious sites, sacred places. Unknown Alien Metropolis Is Uncovered Off Ice Land.

The Orion-Pyramid Correlation. This work shows the interior structu… Inspired by: "A new look at an old design… No place has generated so much speculat… Cambodge Angkor Wat. 4,000-Year-Old Burial Revealed on Welsh Island Linked to Mysterious Druid Sorcerers. Excavations are underway on the 4,000-year-old Bronze Age burial cairn known as ‘Bryn Celli Ddu Bach’ on the British island of Anglesey, located off the north coast of Wales. 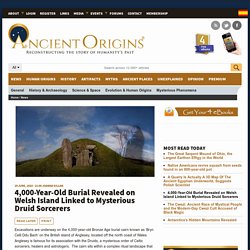 Anglesey is famous for its association with the Druids, a mysterious order of Celtic sorcerers, healers and astrologers. The cairn sits within a complex ritual landscape that is rich with megalithic monuments and ancient structures. The North Wales Chronicle reports that the burial mound, which sets next to the famous, 5,000-year-old passage tomb of Bryn Celli Dhu, is under excavation until July 7. Researchers have already found panels of rock art, evidence of cremation, bone, flint tools, pits and prehistoric pottery sherds. What lies buried deeper within the mound still remains to be seen. Stonehenge is not alone: 7 ancient megaliths you've never seen. These stone structures are as mysterious as they are beautiful. 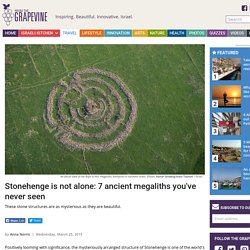 Positively looming with significance, the mysteriously arranged structure of Stonehenge is one of the world's greatest wonders. But these odd stone arrangements can be found throughout the world in many shapes and sizes. Graham Hancock Reveals Mind Boggling Mysteries Of The Great Pyramid & Who Really Built It. The Facts:Musk's SpaceX has begun launching satellites into Earth's orbit that will provide 5G infrastructure to the world. 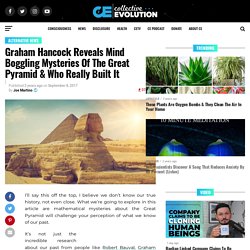 They will be launching hundreds more over the year.Reflect On:Are we acting too quickly on dangerous technology without safety testing? Are we as humans more connected to having the latest greatest technology than we are to our own health and wellness? SpaceX has already begun launching satellites into space, which are set to provide 5G internet to the world. Intensely focused beams of microwave radiation will begin hitting Earth. This is not an image of fear, but one of deep questioning: Are we jumping too fast on this technology, despite the fact that it’s already showing signs of danger for our health?

The Bosnian Pyramid Complex: Larger, Older & More Mysterious Than Pyramids In Egypt. The Facts:In 2005, a giant pyramid complex consisting of 11 structures was discovered in Bosnia. 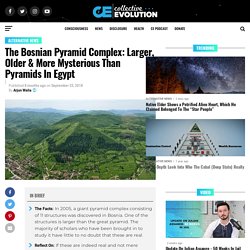 One of the structures is larger than the great pyramid. The majority of scholars who have been brought in to study it have little to no doubt that these are real.Reflect On:If these are indeed real and not mere natural formations, what are the implications? Pyramid structures bigger than Egypt, and also possibly much older than Egypt, would change everything we think we know about our past, and this is just one example. Watch: Clap In Front of the Mayan Kukulkan Pyramid & It Mimics The Sound of the Quetzal Bird. The Facts:An ex-model who was set to testify against Silvio Berlusconi in a bribery case and also was preparing to release a book alleging Berlusconi's Satanic practices died from what is currently believed to be “murder by radioactive poisoning.”Reflect On:As difficult as it is for many to fathom, is it perhaps necessary for us to acknowledge and confront the growing revelations of dark practices on the part of the global elite for the purposes of our own evolution? 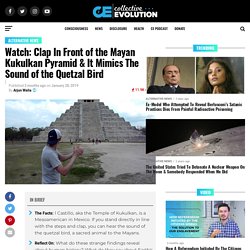 There are many people who don’t believe that the world’s elite have been religiously conducting Satanic practices in the bowels of their mansions and other private hideaways throughout history. Those doubters argue that if such a thing was happening, there would be no way they would have been able to keep it a secret all this time. Not that it’s a ‘secret’ any more to those truth-seekers who are open to this perception-bending reality. Nassim Haramein - Channel 64 - "Ancient Origins" with Resonance Science Foundati... 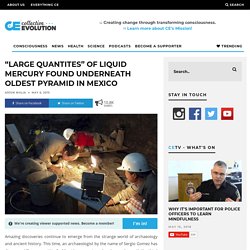 Become a member! Amazing discoveries continue to emerge from the strange world of archaeology and ancient history. This time, an archaeologist by the name of Sergio Gomez has discovered “large quantities” of liquid mercury in a chamber underneath the third largest pyramid of Teotihuacan (feathered serpant), a very ancient city located in Mexico. The city is commonly referred to as the abode of the gods in the ancient language Nahuatl. Approximately 200,000 people are thought to have lived there between 100 and 700 A.D. 2,000-year-old underground city discovered by scientists—what it contains is terrifying. A ‘lost’ 2.000-year-old underground city has been unearthed by experts in Iran, what they found inside was completely unexpected and terrifying. 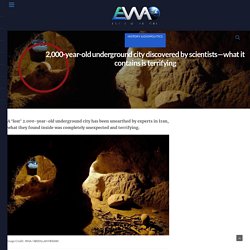 Located in the area near the city of Samen, archaeologists excavated the remains of around 50 large underground rooms that served as houses some 2,000 years ago. The discovery of the underground city in is incontrovertible evidence that archeology is a science that requires extreme patience in order to obtain valuable rewards. After 12 years of excavations, researchers have finally announced the existence of countless artifacts, skeletons and more than 50 rooms of different sizes connected by tunnels, intricately built some 2,000 years ago—dating back to the period of the fall of the Achaemenid Empire (550-330 BC) and the rise of the Parthian Empire (247 BC-224 AD).

However, the most terrifying part is that experts have found around 60 skeletons within the complex. Its residents worshiped Mithra, the ancient Iranian god of the Sun. Meet the megalith of Al-Naslaa—split in half with laser-like precision. Located at the Tamya Oasis in Saudi Arabia is a fascinating megalith called Al-Naslaa. 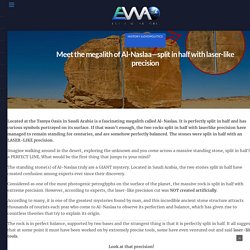 It is perfectly split in half and has curious symbols portrayed on its surface. If that wasn’t enough, the two rocks split in half with laserlike precision have managed to remain standing for centuries, and are somehow perfectly balanced. Exclusive: New Nasca Lines Discovered in Peru. Etched into the high desert of southern Peru more than a millennium ago, the enigmatic Nasca lines continue to capture our imagination. More than a thousand of these geoglyphs (literally, 'ground drawings') sprawl across the sandy soil of Nasca province, the remains of little-understood ritual practices that may have been connected to life-giving rain. Now, Peruvian archaeologists armed with drones have discovered more than 50 new examples of these mysterious desert monuments in adjacent Palpa province, traced onto the earth's surface in lines almost too fine to see with the human eye. In addition, archaeologists surveyed locally known geoglyphs with drones for the first time—mapping them in never-before-seen detail.

The ancient tablet composed in the legendary city of Babylon dates to approximately 600 B.C. and was unearthed a century ago. However, only recently has the tablet been studied accordingly, when Dr. Ancient Europeans Built Underground Tunnels 12,000 Years Ago! Teotihuacan; An Ancient City That Resembles A Circuit Board When Viewed From Above. 10 Of The Most Mysterious Discoveries Made On Earth. The history of our planet is full of incredible mysteries.

The more we search and research, the more mysteries we uncover. And despite the fact that archaeologists and scientists work hard to figure everything out, we know very little about our past. As Best Selling author Graham Hancock has said, we are a species with amnesia. Meet the megalith of Al-Naslaa—split in half with laser-like precision. Saudi Arabia's 7,000-year-old 'mystery structures' revealed up close in stunning new images. The mysterious structures which could date back around 7,000 years can only be appreciated from the air. Who built them and what was their purpose? Located in the Harrat Khaybar region in Saudi Arabia are stunning gate structure dubbed as the oldest man-made structures in the landscape. The incredible structures, only visible from the air, are believed to have been built around 7,000 years ago. Around 400 of these mysterious stone structures adorn the landscape in the remote Saudi Arabian Desert, and archaeologists have no idea what their purpose was, why they can only be seen from the air, and who created them.

50 AMAZING images of the Russian megaliths—Evidence of advanced ancient tech? New Aerial Images Show Mysterious Lost City In The Middle Of The Pacific Ocean. The Remains of a 200,000 Year Old Advanced Civilization Found in Africa. These 12,000 Year Old Massive Underground Tunnels Stretch from Scotland to Turkey (Over 2700 Miles) Evidently, even thousands of years ago human beings were connected with individuals from far away regions on Earth; thousands of tunnels have been uncovered that span from North Scotland to the Mediterranean. Their specific or primary purposes are still unknown, but many believe that the 12,000 year old network was constructed as a means of escaping predators and staying protected from predators. De 6 bästa Sacred Sites-bilderna på Pinterest.

Arkaim; The Russian Stonehenge. NASA Sparks Interest in Enigmatic Earthworks of Kazakhstan. Shocking Video! A Naval Officer Tells Us EXACTLY What He Saw Hidden In Antarctica. 12,000 Year Old Massive Underground Tunnels Are Real And Stretch From Scotland To Turkey. Archaeologists Discover ONE MILLION Year-Old Artificial Underground Complex - UFOholic.com. Unknown Alien Metropolis Is Uncovered Off Ice Land. Baalbek: Ancient Alien Sanctuary and Landing Spot Revealed. Would it be wise to believe that a primitive society erected one of the most mysterious cities, thousands of years ago, using nothing more than early Bronze Age tools? If not, who helped them carve and transport the largest stones in the world?

In Lebanon, 4,000 feet above sea level, lies the mythical Baalbek, an ancient site with a history spanning over 9,000 years. The Sunken City Of Cuba - Officials Ignored It For 10 Years Because It's 'Out Of Time And Out Of Place' Untitled. Meet the Nazca Runways: Flat Mountaintops that defy explanation. Evidence of Advanced Ancient Technology: Sacsayhuaman. Stonehenge Discovery &#39;Blows Lid Off&#39; Old Theories About Builders Of Ancient Monument (VIDEO) One Man Found A Secret Room Behind His Walls Which Lead To This Discovery. EWAO A Giant Energy Machine? 5 Incredible characteristics of the Bosnian Pyramid. Could Stonehenge really be a giant Instrument? 5 Intriguing Theories That Explain The Mystery Of Stonehenge.