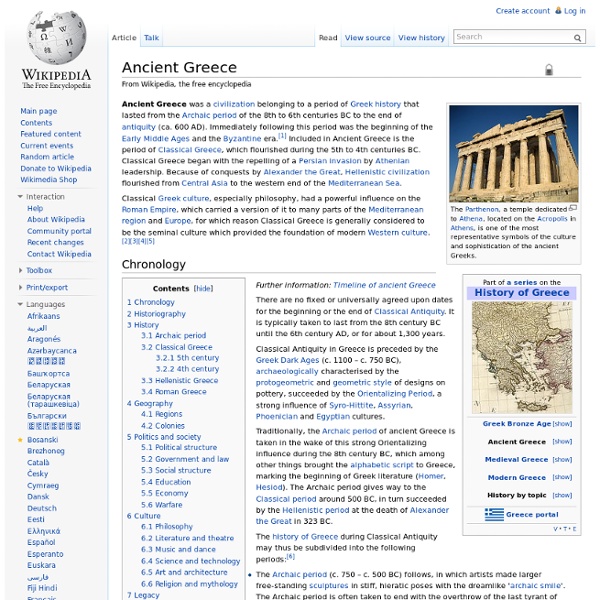 The Parthenon, a temple dedicated to Athena, located on the Acropolis in Athens, is one of the most representative symbols of the culture and sophistication of the ancient Greeks. Ancient Greece was a Greek civilization belonging to a period of Greek history that lasted from the Archaic period of the 8th to 6th centuries BC to the end of antiquity (ca. 600 AD). Immediately following this period was the beginning of the Early Middle Ages and the Byzantine era.[1] Included in ancient Greece is the period of Classical Greece, which flourished during the 5th to 4th centuries BC. Classical Greek culture, especially philosophy, had a powerful influence on the Roman Empire, which carried a version of it to many parts of the Mediterranean Basin and Europe, for which reason Classical Greece is generally considered to be the seminal culture which provided the foundation of modern Western culture.[2][3][4][5] Chronology Ancient Periods Astronomical year numbering Historiography History Archaic period

Minoan civilization Map of Minoan Crete The Minoan civilization was an Aegean Bronze Age civilization that arose on the island of Crete and flourished from approximately the 27th century BC to the 15th century BC.[1] It was rediscovered at the beginning of the 20th century through the work of British archaeologist Arthur Evans. Will Durant referred to it as "the first link in the European chain."[2] The early inhabitants of Crete settled as early as 128,000 BC, during the Middle Paleolithic age.[3][4] It was not until 5000 BC that the first signs of advanced agriculture appeared, marking the beginning of civilization. Overview[edit] The term "Minoan" was coined by Arthur Evans after the mythic "king" Minos.[5] Minos was associated in Greek myth with the labyrinth, which Evans identified with the site at Knossos. Chronology and history[edit] Rather than associate absolute calendar dates for the Minoan period, archaeologists use two systems of relative chronology. History[edit] Geography[edit]

Ancient Greek Economy Bronze Age storage jars at Knossos The Greeks did not have the same idea of an economy that we have. The word "economy" is Greek, but to the Greeks it meant something like "rules of a household" (the "eco" part of economy is from the Greek word for house, "oikos", and the "nomy" part is from their word for law). Because they did not think about the economy as a whole, it is hard to talk of a government economic policy. But even without any policy, people do still make things, use things, buy things, and sell things, and that is what an economy is. Even as far back as the Stone Age, many Greeks were sailors, and sailed all over the Eastern Mediterranean. Finally, other Greeks were pirates, who simply raided wherever they could and took whatever they could get. More on the Greek economy Or, check out these book suggestions on Amazon.com or at your local library: Trade & Warfare, by Robert Hull (2000). Ancient Greek Jobs (People in the Past Series-Greece), by Haydn Middleton (2002). or

Greek Slaves Slave woman playing a kithara. You can tell she is a slave because she has short hair. In ancient Greece, most people who worked at jobs - teachers, doctors, nurses, construction workers, policemen, hair-dressers, mail carriers, cooks, nannies, bakers, miners, farmhands, dancers, musicians, craftspeople, and accountants - were slaves instead of free people. This was partly because free Greek people had no money to pay workers with (until the Archaic period), and because they had no clocks (to measure how long somebody had worked). But it was also because it is cheaper to force people to work for you than it is to pay them. A man cooking - probably a slave(Louvre Museum, Paris) Most people who were slaves in Greece had been born free. There were a lot of jobs, and so about a third of the people living in ancient Greece were slaves. Most people in ancient Greece who were slaves worked in the fields, plowing and planting seeds and harvesting wheat and barley and olives. or

Food in Ancient Greece The Greek diet consisted of foods that were easily raised in the rocky terrain of Greece’s landscape. Breakfast was eaten just after sunrise and consisted of bread dipped in wine. Lunch was again bread dipped in wine along with some olives, figs, cheese or dried fish. Supper was the main meal of each day. Fish was the main source of protein in the Greek diet. Wine was the main drink in ancient Greece. The Greeks did not have any eating utensils, so they ate with their hands. Men often gathered for dinner parties called symposiums. Daily Life in Ancient Greece Children Clothing Fashion Food Home Life Marriage Men and Women's Roles Shopping Women Historyphoto101.com - Great History Photos, Right Price Follow our updates on Facebook or Twitter Pictures on this page are for viewing only. Please see Pictures Galleries for Royalty Free images for Educational uses. Copyright © 2000-2014 All Rights Reserved History Source LLC. Contact Us: Suggest a Site - General Comments

Ancient Greece Ancient Greece - History, mythology, art, war, culture, society, and architecture. Greek Alphabet The letters in the Greek alphabet presented below are used for printed Ancient Greek texts. The earliest Greek texts that have survived were written with a radically different script called Linear B. For a detailed and wonderfully well argued discussion of the origins of the Greek alphabet, see Roger D. You can find fonts for displaying or writing Greek text as well as utilities for converting older fonts to the new Unicode standarde on our fonts page. Three sets of pronunciation suggestions are given in the table below: first the pronunciation of each letter in Modern Greek, then the reconstructed Hellenistic Koine pronunciation, and finally the reconstructed pronunciation for the Classical period (before about 350 BCE). The Erasmian pronunciation used in many schools to teach Biblical Greek and sometimes even Classical Greek is not given on this page. To hear online examples of both Classical and Modern Greek pronunciation, see the discussion at the end of the alphabet below. Roger D.